The first 6mi/10km of today were on the JMT/PCT, so it was easy walking. I started with an hour of uphill switchbacks and motivating music. 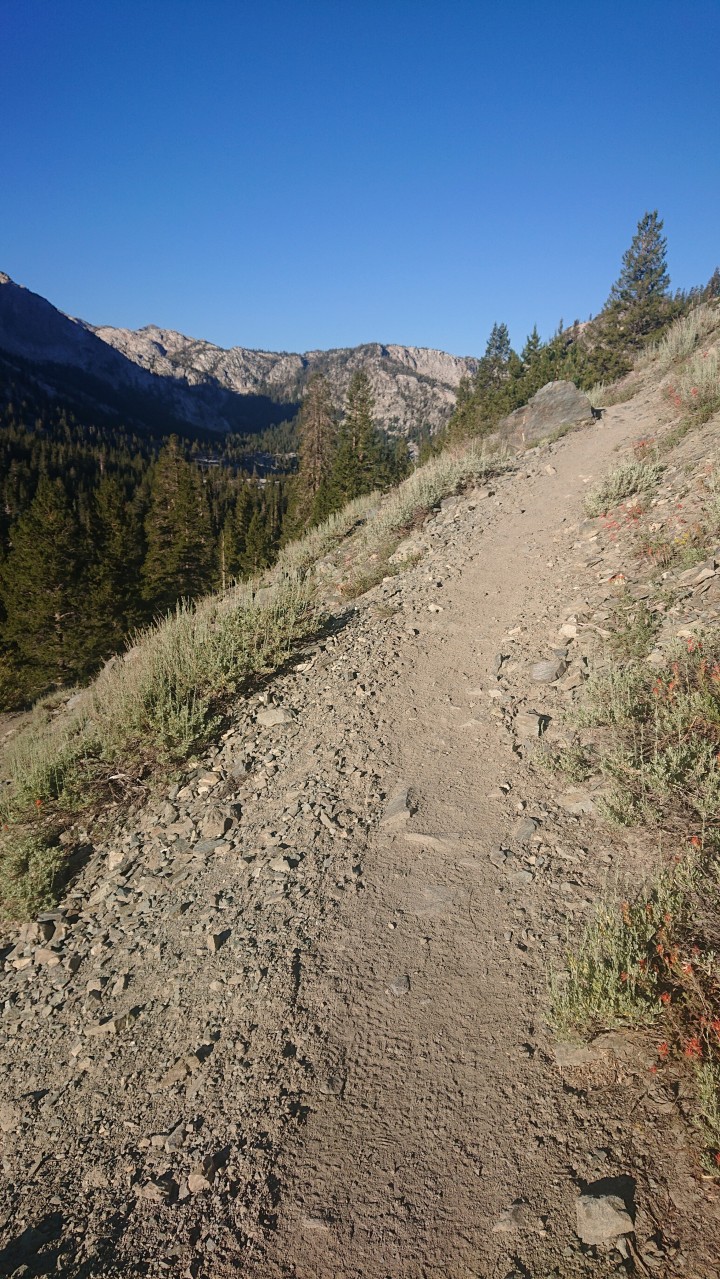 At the top of the hill was Lake Virginia, which was very calm in the early morning. 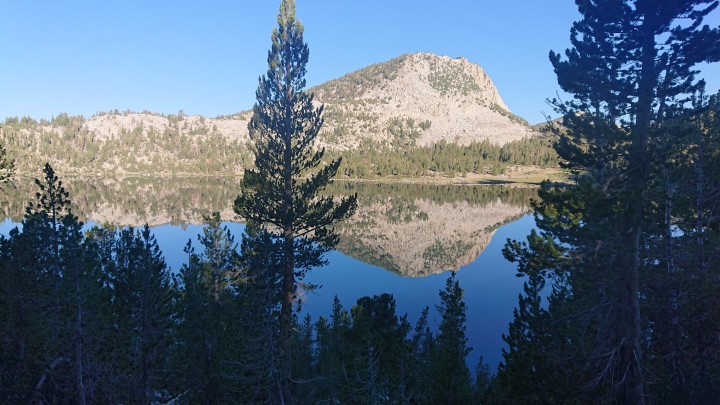 The descent was nice, it was fun to hike on a smooth trail thru talus, watching it fly by. 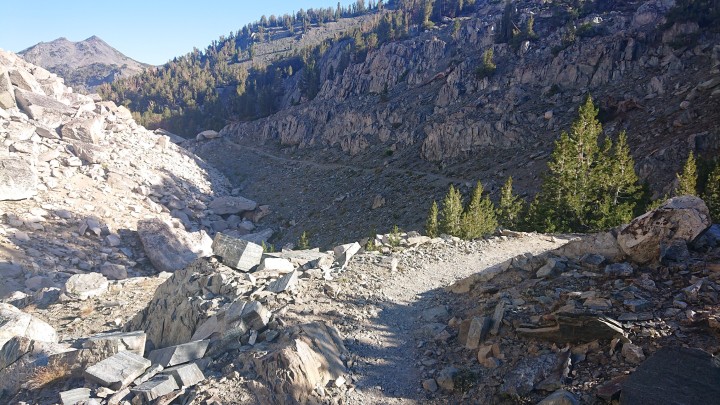 The next lake was Purple Lake, I don’t remember this lake either from 2015.

It even had bridge! Fancy trail. 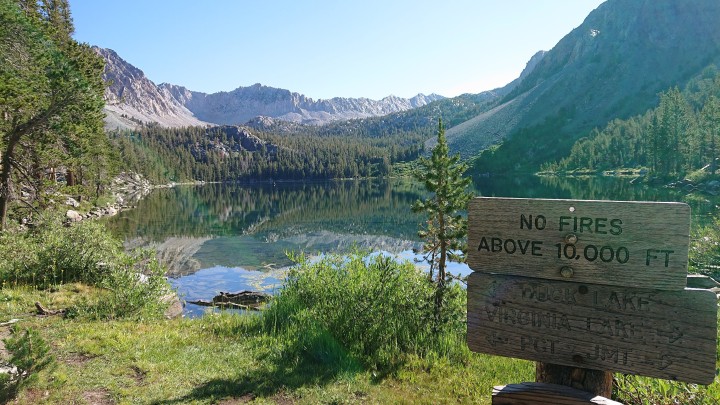 The trail junctions had consistent signage in this section, which was nice. I left the JMT/PCT and went onward, to Duck Lake! 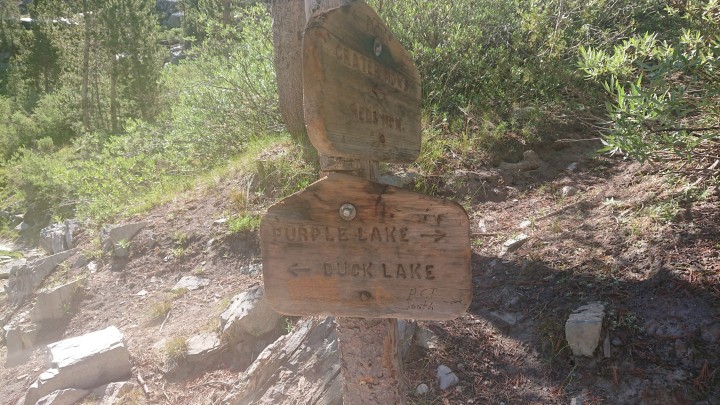 The climb up to Duck Lake was entertaining, with the view to the Cascade Valley, thousands of feet below. 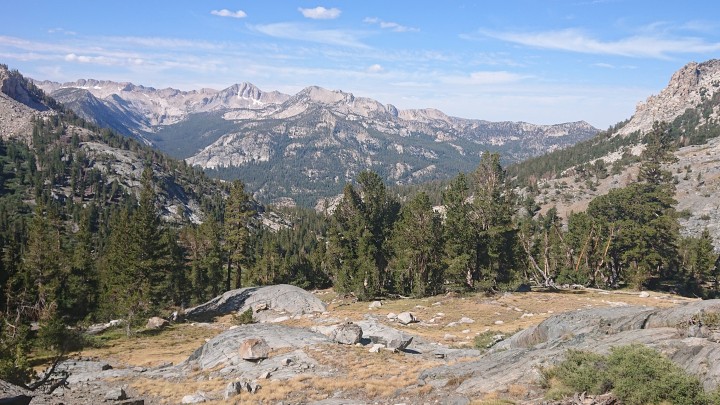 I crossed paths with a woman hiking the other direction, from the town of Mammoth. It’s a long way from the trailhead, so I asked her what time she started hiking. Her reply… “at the quack of dawn”. I should’ve asked for a phone number, ha!
I climbed up along Duck Lake for an hour, watching the lake get smaller below me.

The view from Duck Pass was interesting, I could see ahead to my next (unnamed) pass. This was the first time the SHR is on the Sierra crest (most of the crest is too steep or technical).

Sooo many purple flowers in that alpine meadow.

From that pass, I was passed by a trail runner going my direction, down to Deer Lakes. 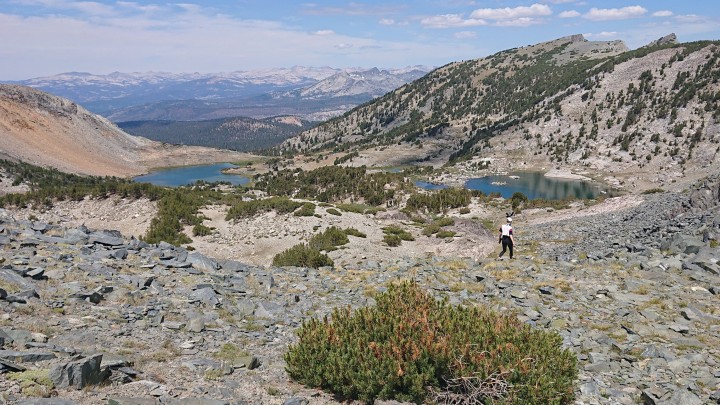 I hiked by two of the Deer lakes, swimming in the first one, and having lunch at the second one.

The final climb for the day was up to Mammoth Crest.

The view from the crest was incredible, I could see north to the Ritter range. 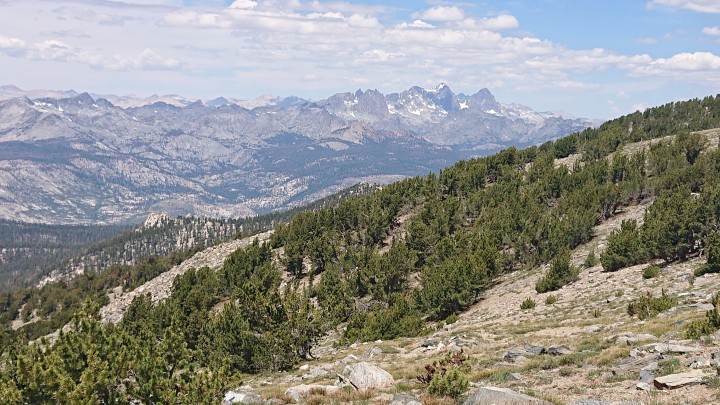 And south, to a neat ridgeline topped by a single row of trees. 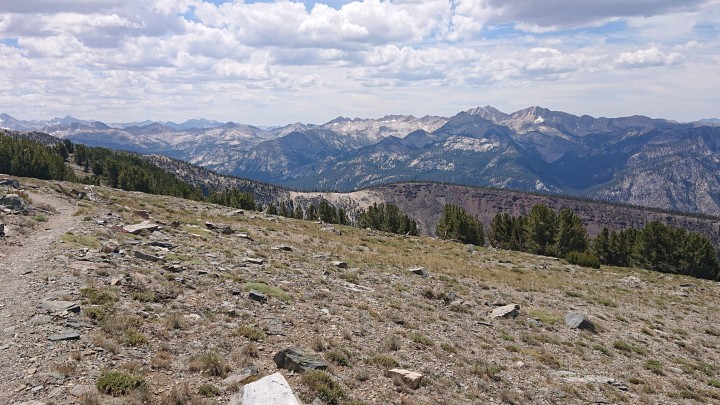 Much like the hike to Mt Whitney, the ridgeline was occasionally punctuated by “windows” to the valley far below. 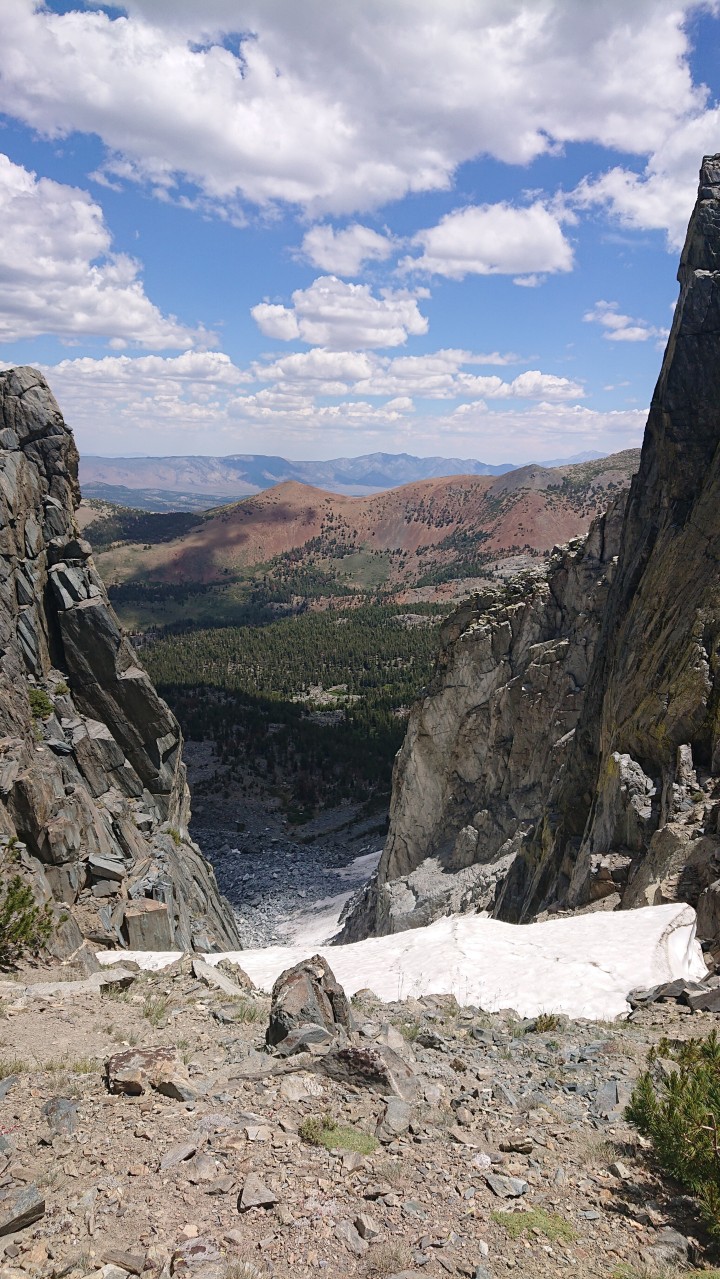 It was an epic ridgewalk day, so different from the usual pass/valley sequence. 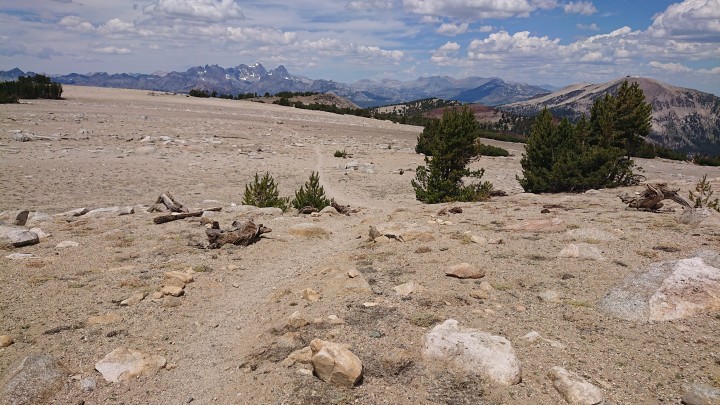 The view of Mammoth mountain, with it’s ski lift apparatus on top.

If there’s a fork in the road…take it!

The rocks in this area are mostly volcanic, I’m not sure why. 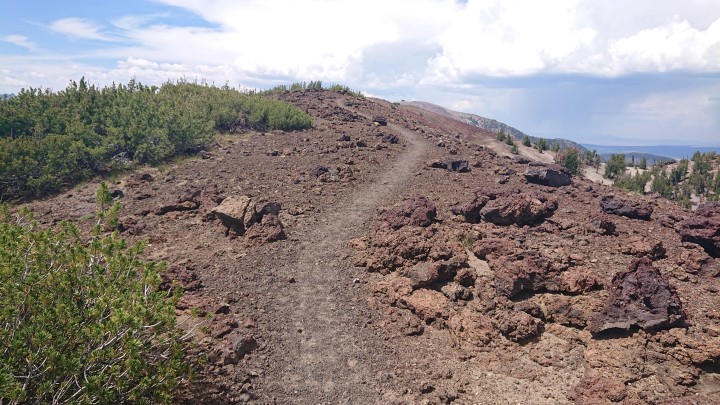 I could see down into the town of Mammoth Lakes, and see the lakes for which it’s named!

The descent off the ridge was interesting. I’ve descended on snow, on talus, on scree, but never on pumice. 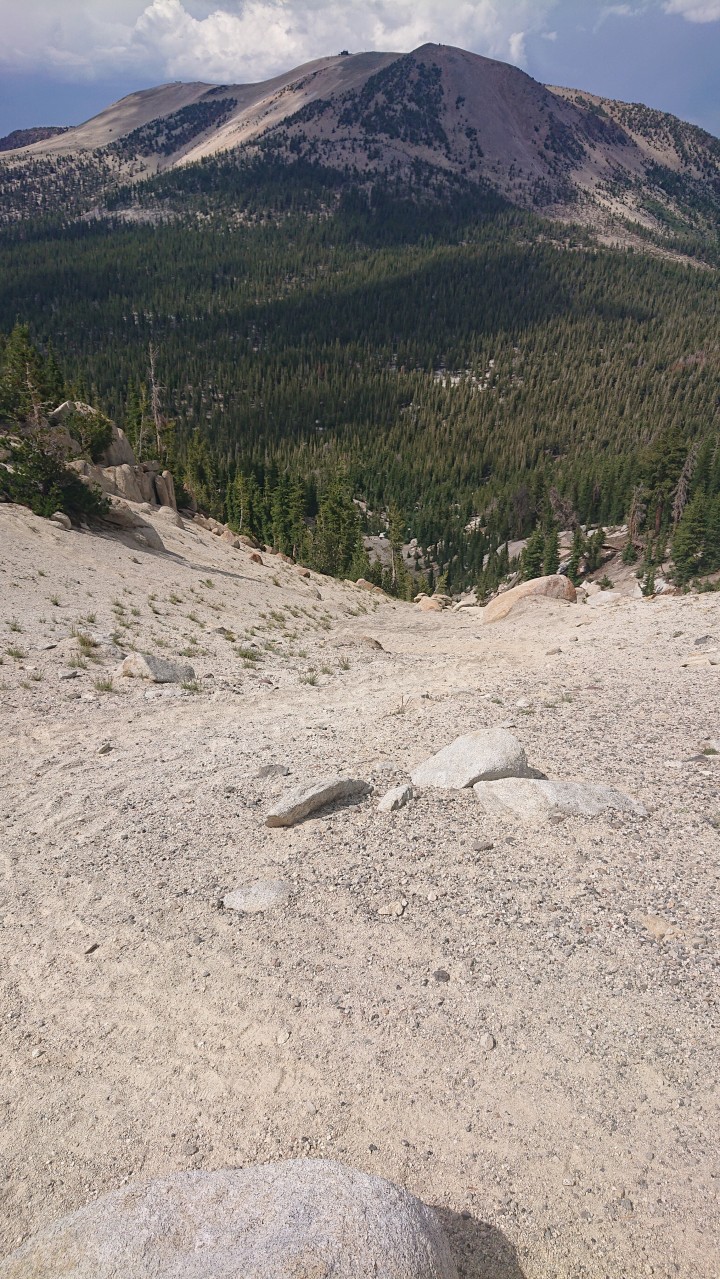 It’s a weird volcanic rock that is lightweight (floats in water), and my feet sank deeply. It was fun to surf it downhill! 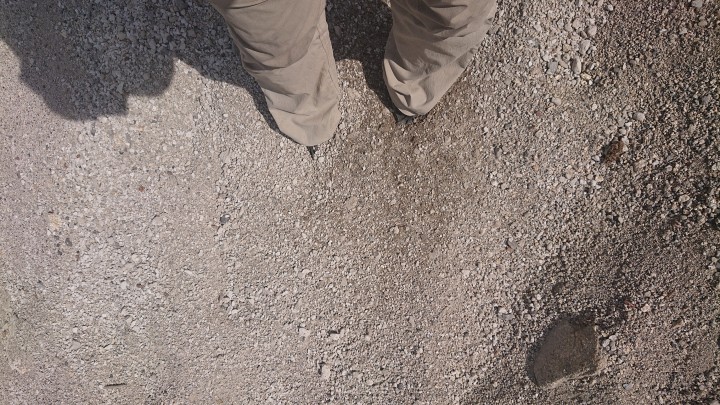 I ended the day at McCloud Lake, and swam and ate dinner there.

The trailhead is only a half mile away, I could’ve headed into town tonight, but I want to take a zero day tomorrow, and Mammoth is an expensive town to spend two nights in. And the weather was great for camping!