Morning hiking is the best, good temperatures, no bugs, and views like this.

I had a steep xc descent, which basically meant walking down slabs next to a waterfall.

It was easy hiking, but still very engaging given the feeling of exposure.

The view from the bottom was unique.

After an hour of descending slabs and meadows, I happily joined a trail thru a flat forest.

When I got to Mono Creek, it looked like I was going to have to ford it.

Wet shoes are no fun, so I scouted a bit and found a makeshift bridge! Log walking is fun.

I followed the popular trail alongside Mono Creek for a few minutes, then split off up to Laurel Lake. It was a steep climb.

The steep climb ended and I was rewarded with easy meadow walking!

There was even a faint trail most of the way.

I got to Laurel Lake, which was really more of an alpine pond.

The guidebook instructions say to walk around the lake, and start climbing the pass at the two huge boulders. I easily found the boulders, and had first lunch in the shade of one of the giant rocks. 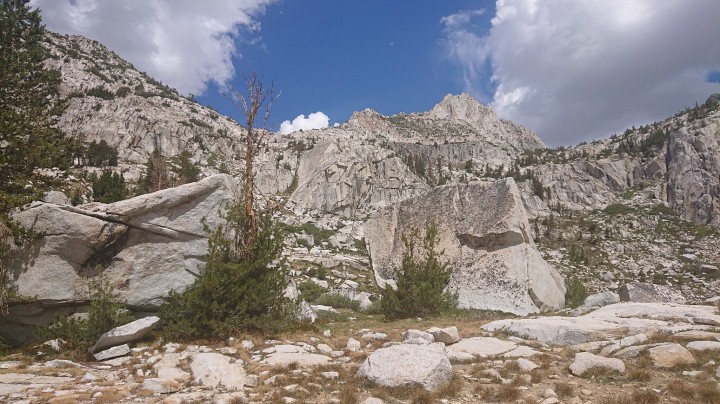 Bighorn pass is next to the dead tree in the photo. I climbed up the left grassy ramp, right to the top. 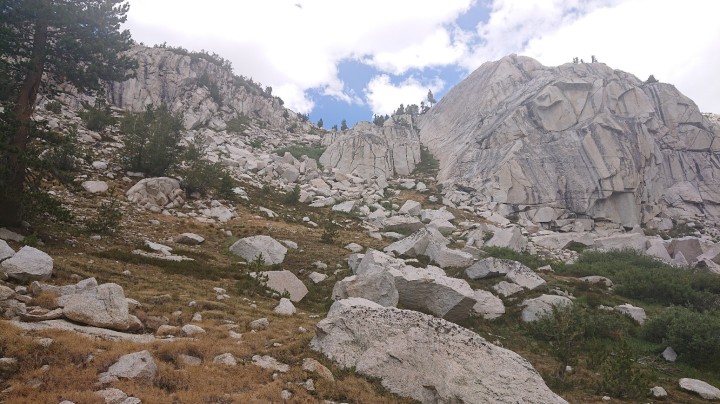 At the top, I could see down to Rosy Finch Lake.

And see that the clouds were gathering….time to move on. The next pass was less than a mile away, Shout-of-Relief pass. It was an easy contour around the basin, to the notch on the right.

I was at the next pass 45 minutes later, gave the obligatory yell, and descended down before thunderstorms started.

Near the bottom of the pass, I saw yet another marmot. I’ve seen so many I’ve started giving them names to distinguish them, this is Steve.

There were acres of fully green meadows…and then this one red flower. So strange. 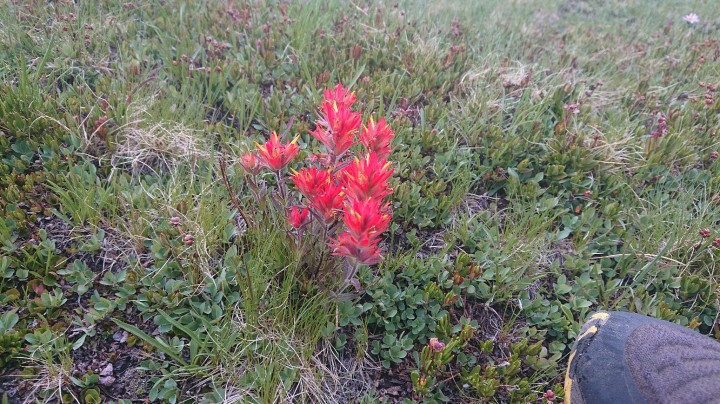 I walked by many small lakes and tarns, mist without names. Cotton lake was one of the larger ones, and it had a unique view looking off into the thunderstorm clouds. 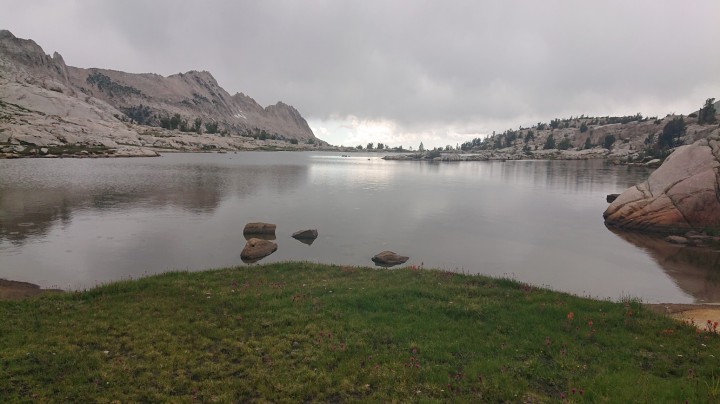 For an hour, there was frequent thunder, and rain for maybe 15 minutes of umbrella time. But it was enough to get the ground wet. Descending on wet slab, yuck.

By the time I reached the lower meadows, the sun had returned. This was called Horse Heaven meadows, probably because of all the grass. I called it mosquito hell.

After a mile of furiously swatting and killing mosquitos, I left the meadow and joined the JMT/PCT again.

It’s such a well built trail!

I camped a minute away, and will do the big climb up to Lake Virginia tomorrow.