Mark, Jim, and I were up early in preparation for our 7am departure. Barrett made us some “breakfast”, which was so far above a normal breakfast it feels insulting to call it that…it was so delicious. He drove us the hour to the trailhead, and the common sentiment was “are we really doing this?!” 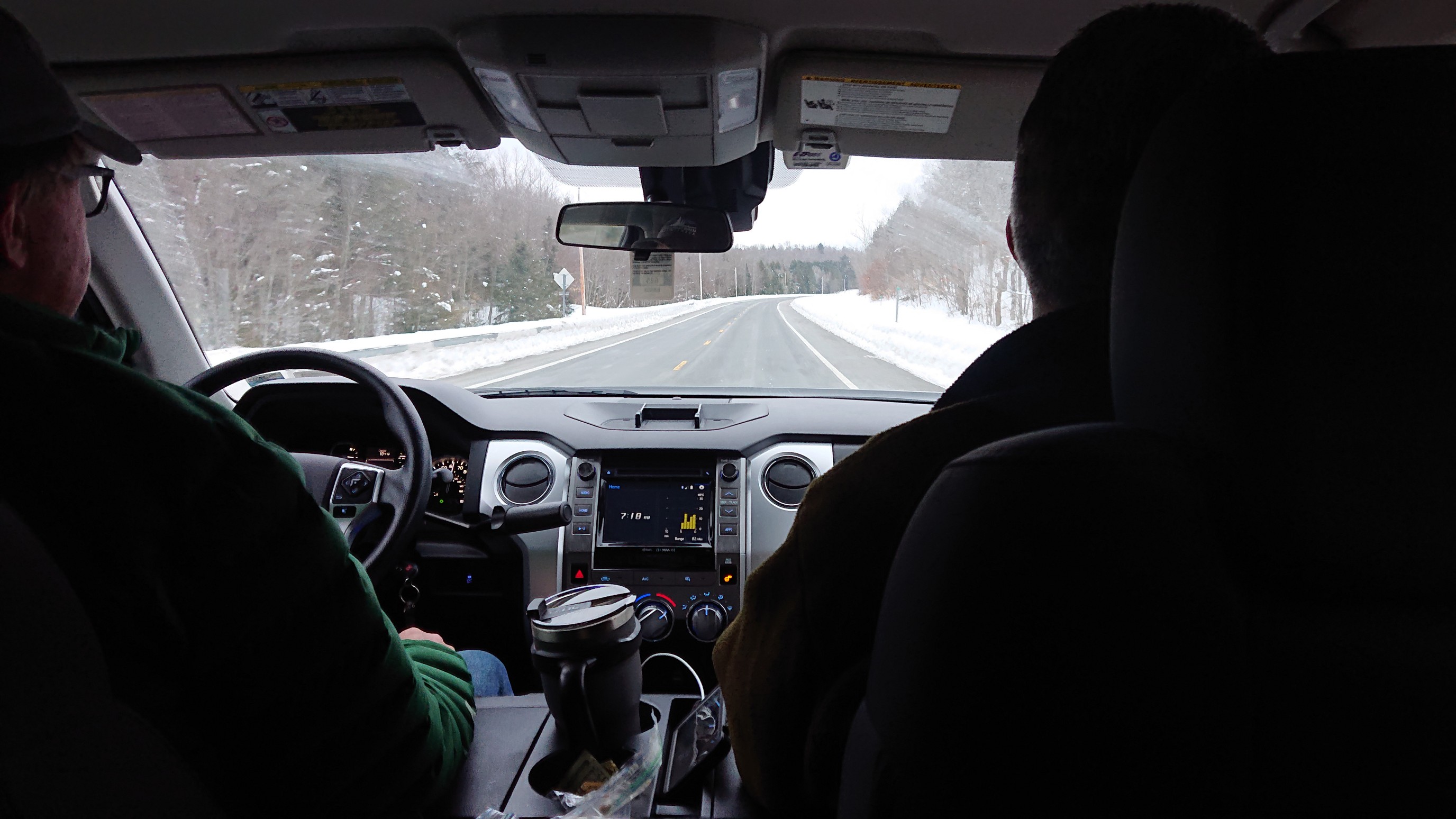 We were in the parking lot for only a few minutes, to put on our skis and packs, and we hit the trail at 8:20am. 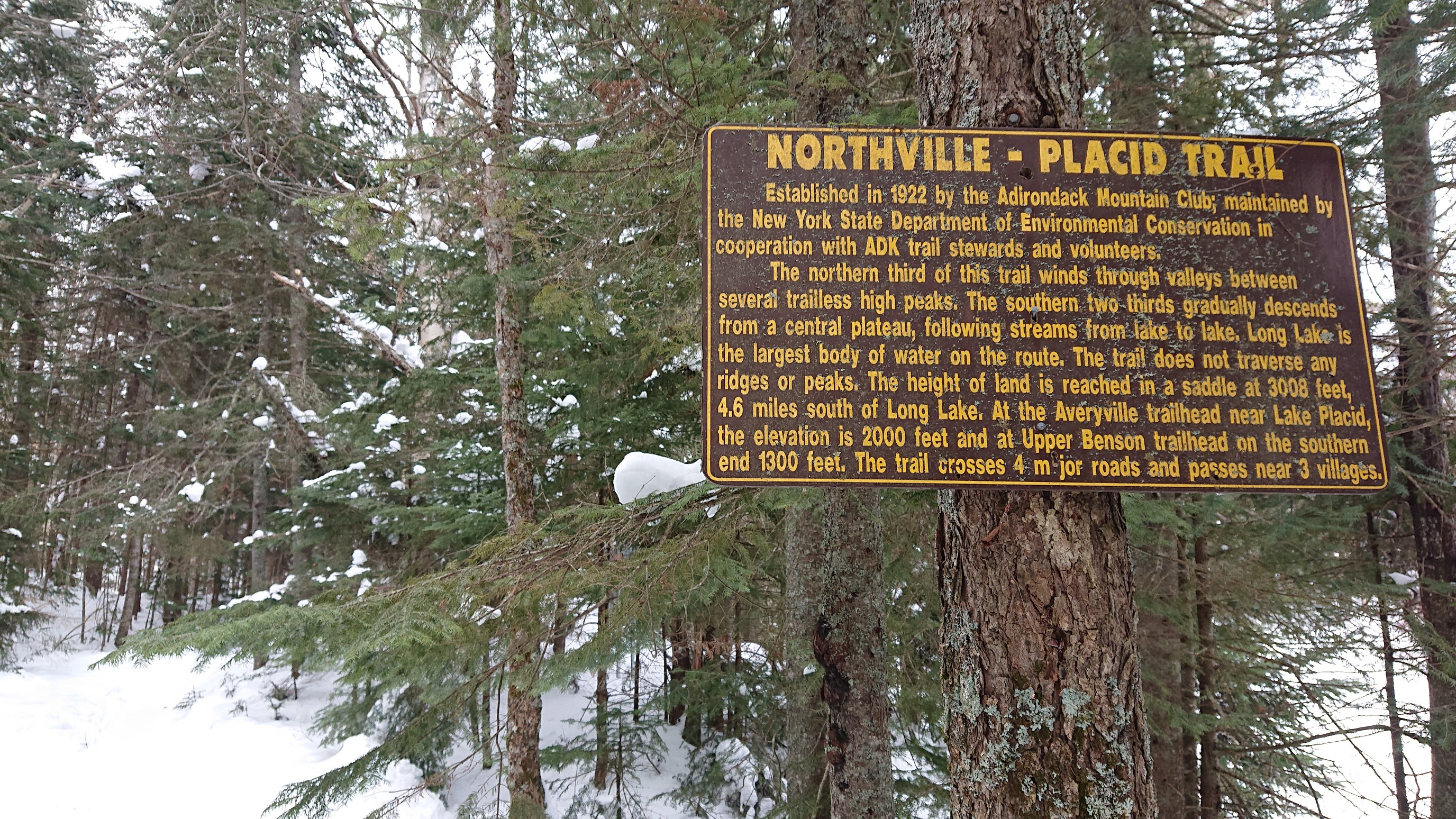 Mark signed our group into the trail register, and we were off into the wilderness! The trail was nicely broken out for the first few miles, and we encountered the only person we would see on the entire trail in the first half-mile.

We took turns in the lead, a common practice for breaking out snowy trails in winter. It wasn’t strictly necessary in this section of trail, as it was highly trafficked. It was nice having a nice smooth track to ski.

Every couple hours, we would take our packs off for an extended break. Usually winter hiking involves snacking on the move, but it was nice weather and we had pretty heavy packs heading into this 5-day section. Jim (left) is communicating with Barrett on his InReach, while Mark (right) eats a peanut-butter &bacon bar. 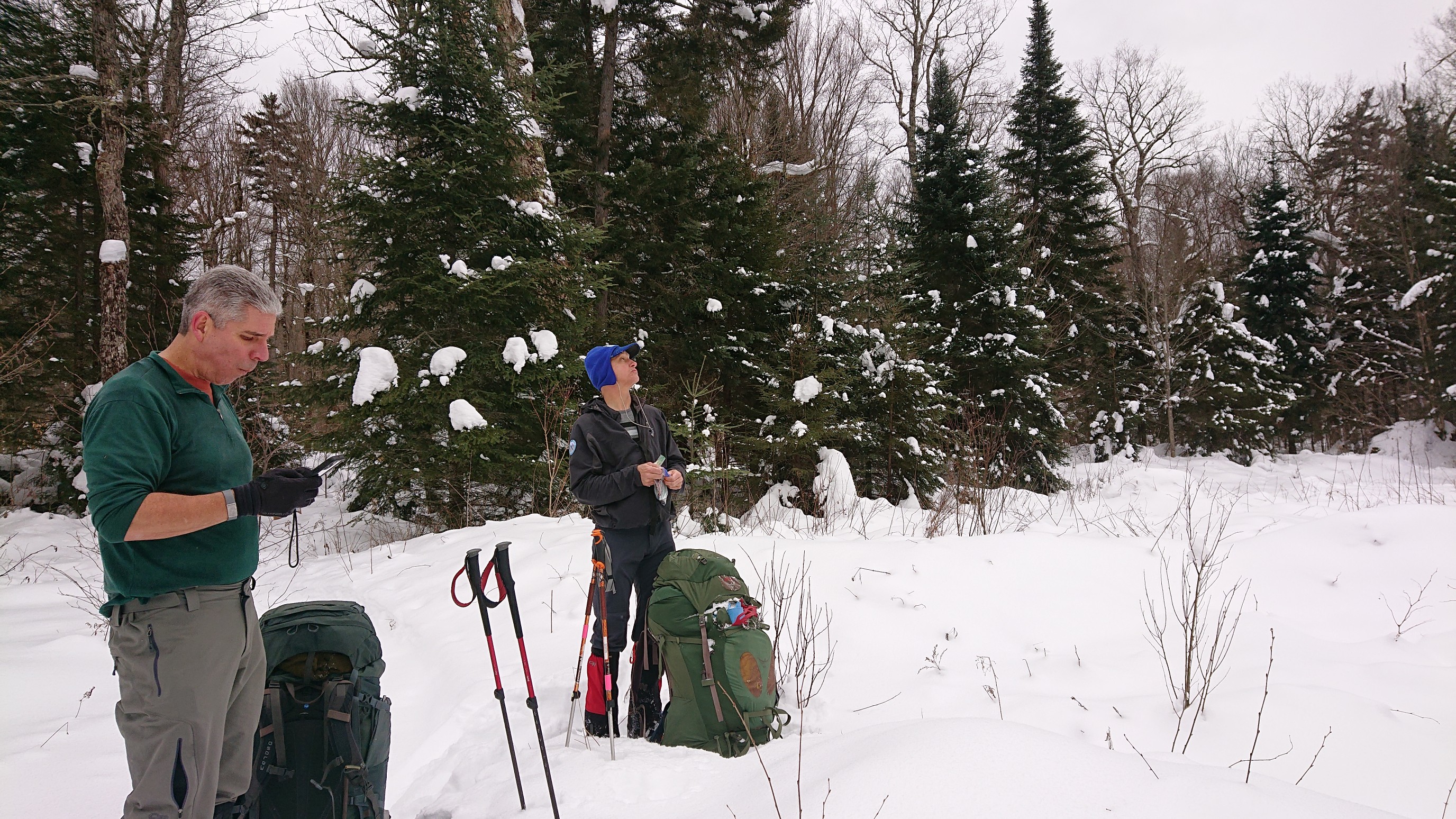 We crossed our first bridge a couple hours into the morning, and it was a nice double-handrail bridge. The bridges without handrails can be scary in winter, when snowpack makes balancing on a narrow bridge difficult. 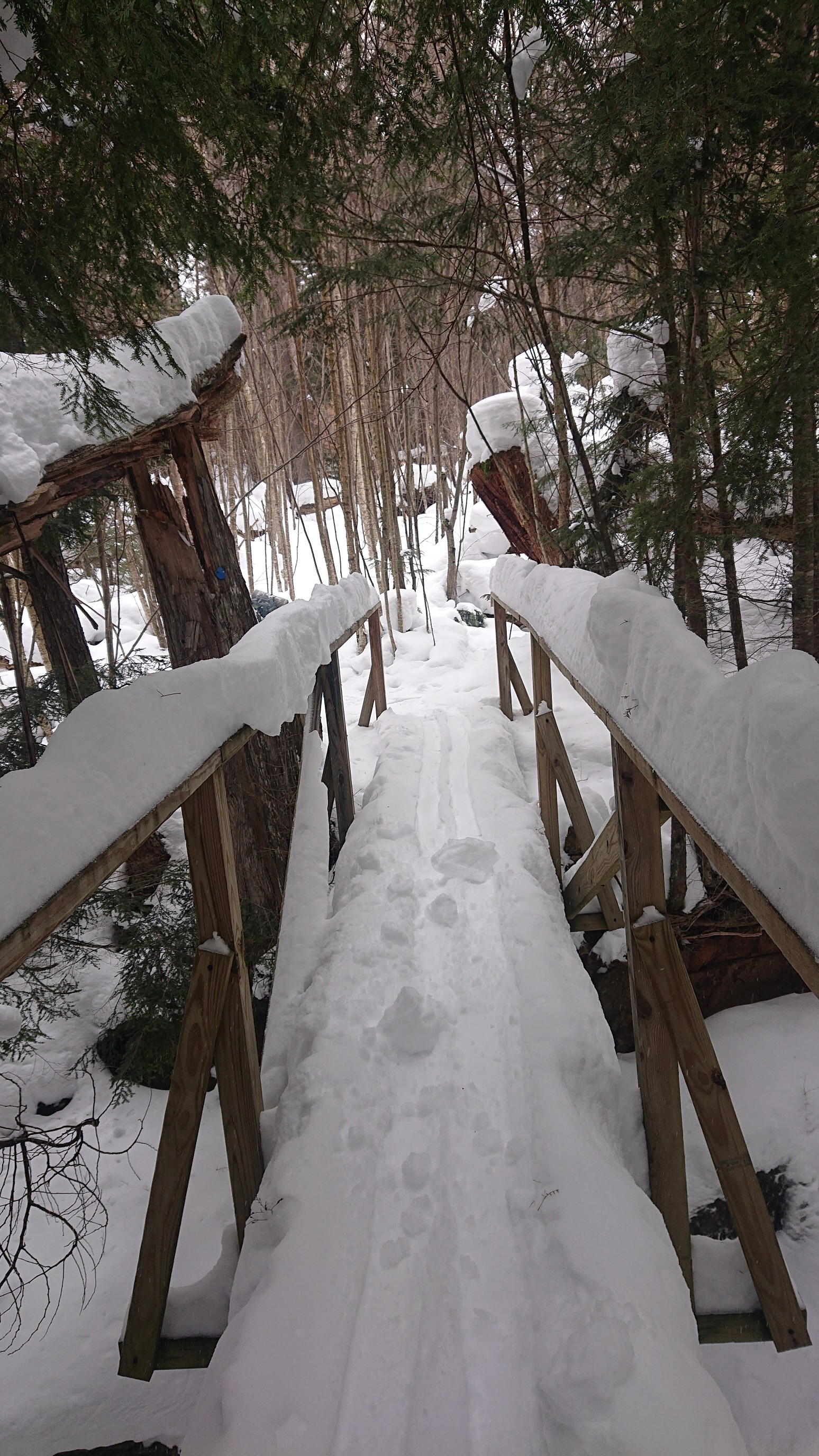 Just after we passed Wanika Falls, we finished climbing and started our slow descent to Moose Pond. The trail was no longer broken out, and we ended up following the Moose Pond inlet stream. Unfortunately, it had one *interesting* crossing in which Jim broke through and earned a wet ski. Mark found a detour, and we extracted ourselves from that awkward spot.

The official trail travels through the thick spruce to the left, so it was unappetizing to follow. A previous group had attempted the NPT a week earlier, and their snowshoe tracks disapeared into the spruce. We decided to continue skiing the frozen inlet stream, which turned into a “vly” or “vlei”, a shallow marshy area in summer. 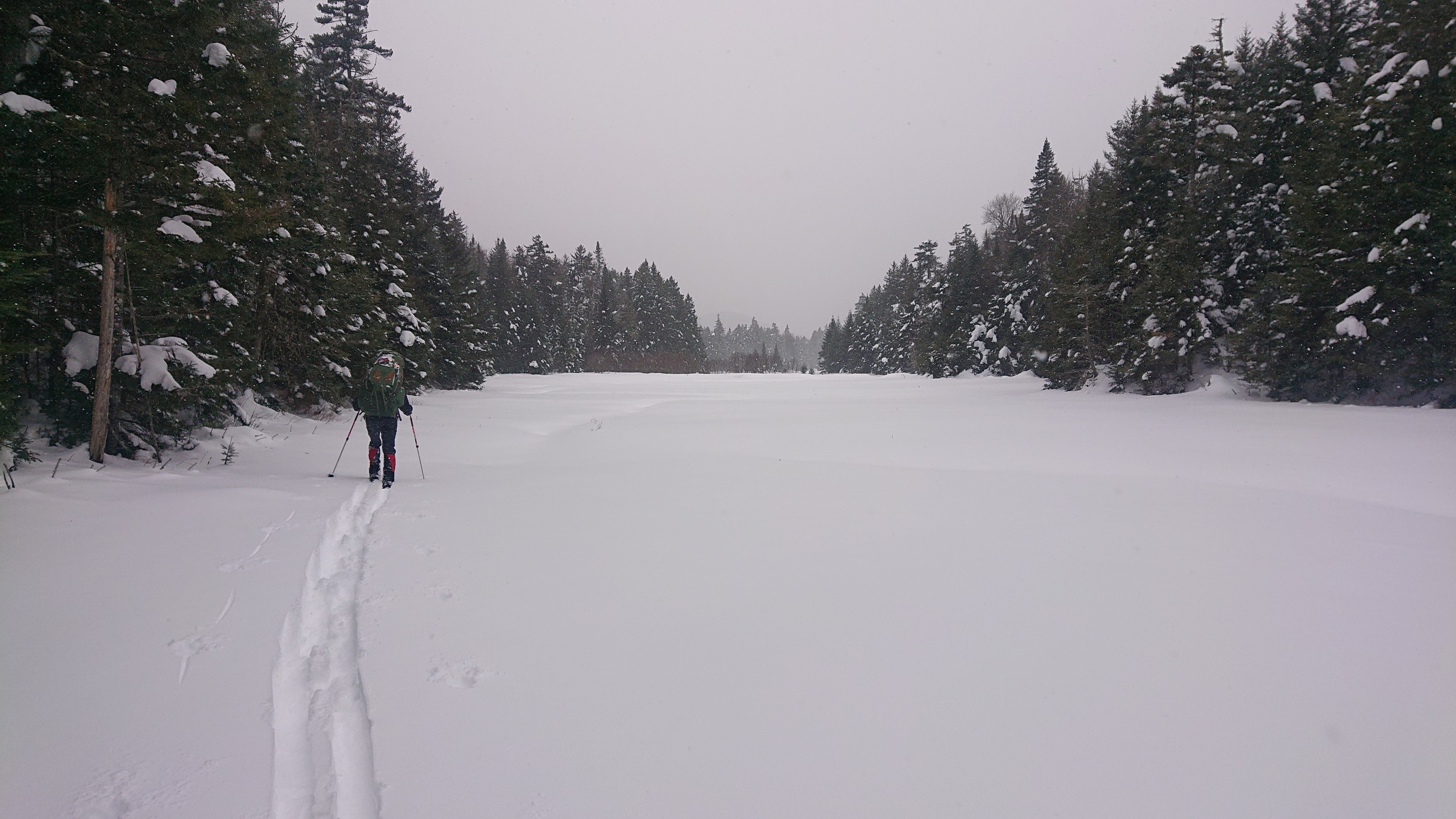 It was fun to ski the vly, as the elevation profile is flat, and there are no thick spruce to bash through. It was certainly faster, too.

Vly skiing is fun! The clouds briefly parted for some sunny-ish travel.

Occassionally we had to skirt a small unfrozen channel, or a patch of willows. Overall, it was a nice afternoon on the skis.

The view to the west across the vly looked familiar. I think it might be the Seward range. 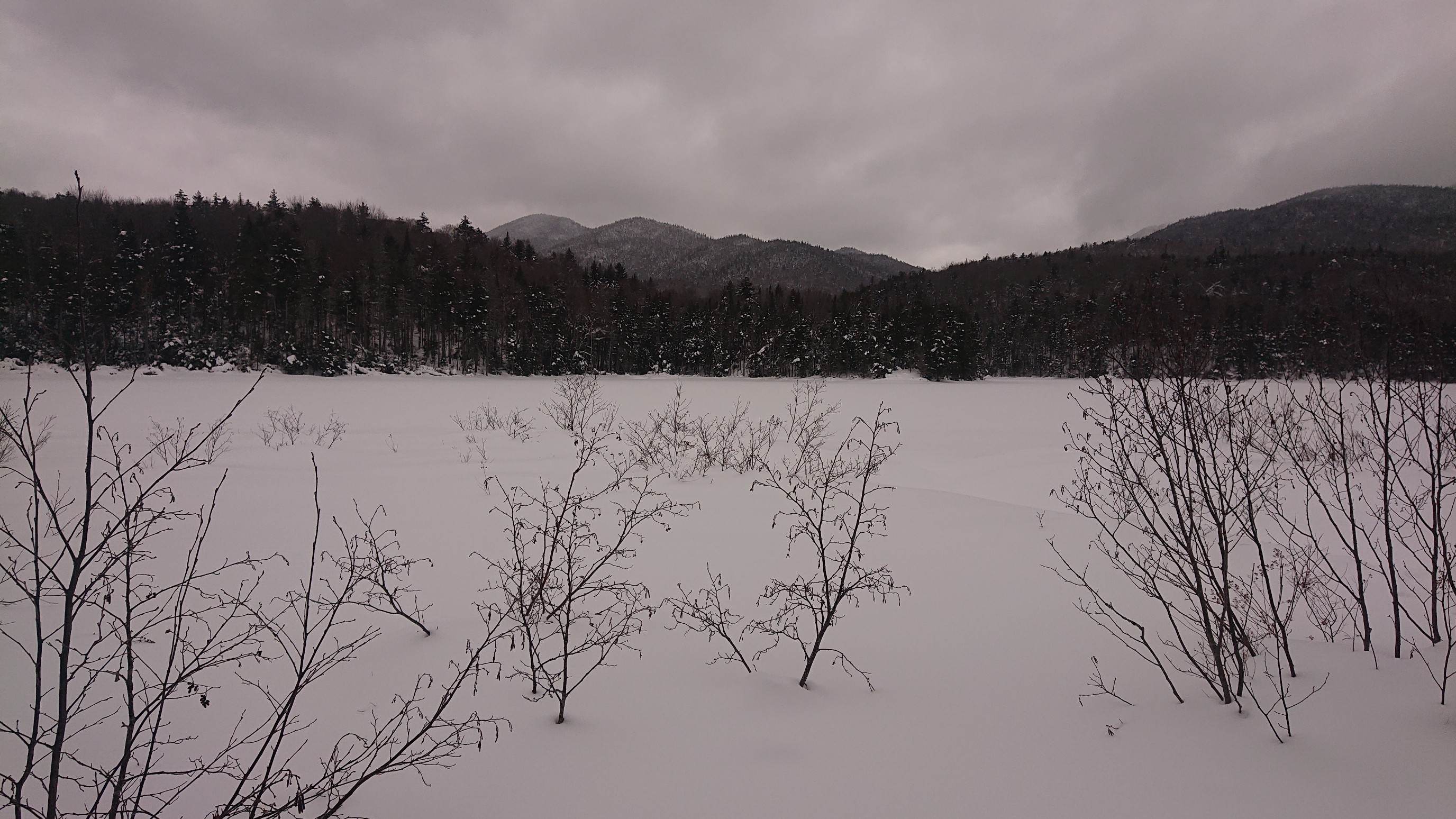 We arrived to the Moose Pond Leanto at 4:30pm, though the last 100m took forever. We circumnavigated a steep section, but in doing so, had to figure out a way around a stream lined with spruce. Ugh. The leanto is perched well above the pond, so the trip down to get water was a little steep and arduous. This is the first of many photos of Mark getting water, a task he probably didn’t realize would become his routine. 🙂

I searched for the toilet/privy, but never found it. It might be a thunderbox, which would be impossible to find under 3ft of snow. In what would become our routine, we setup our 3-man tent behind the leanto, and made dinner and relaxed in the leanto itself. We felt pretty good about the mileage we made today, and I’m curious to see tomorrow how much further we will have the pre-existing snowshoe tracks.