I heard Mark and Jim starting to pack up, but I also heard the sound of light rain beginning to fall. Ugh. I stayed in my tent until 6:30am, then packed up. We hit the trail at 8am, and it had stopped raining but everything was wet. Including slippery bridges! 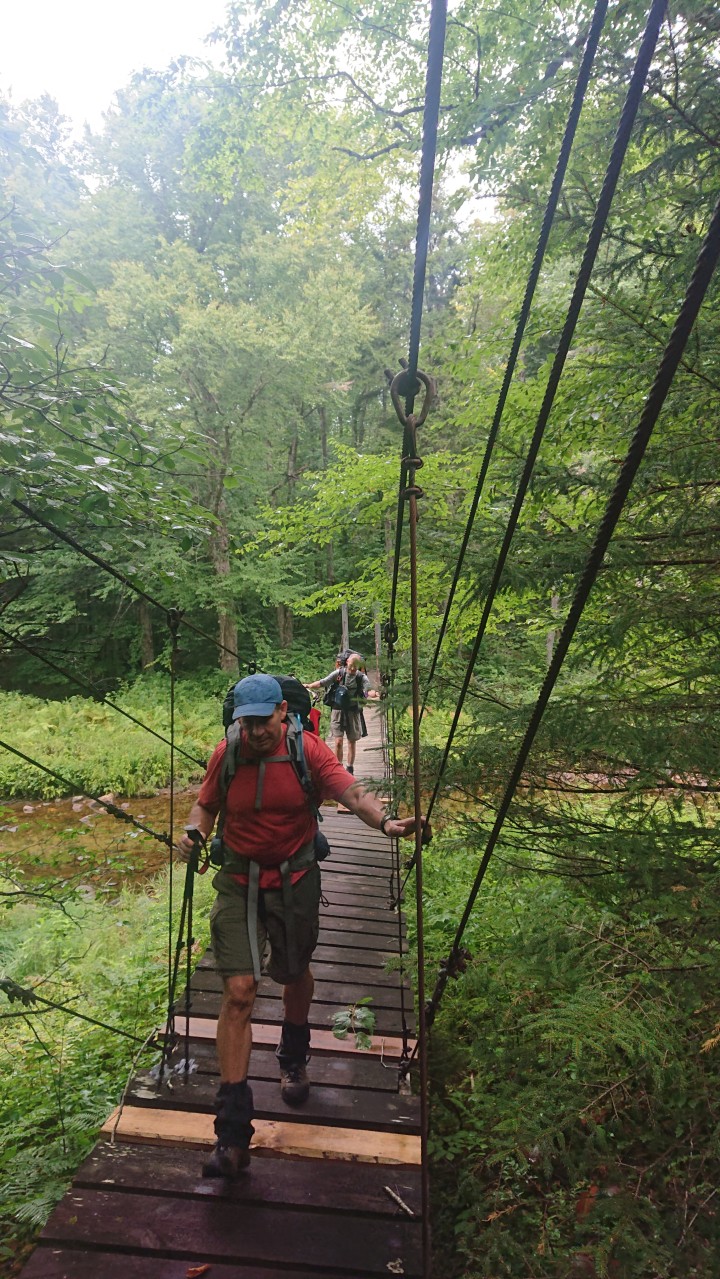 We hiked in the soggy forest all morning, stopping only once for a break at Hamilton Lake Lean-to. Of course Hamilton songs ensued!

The trail passed by Priest’s Vly, a kind of pond/meadow feature.

We arrived at the Highway 8 trailhead just before 11am. The next 3 miles were a roadwalk, so I kept going while Mark& Jim drove to town to buy me some snacks. Awesome friends! I headed toward Piseco, a tiny hamlet with a Post Office and not much else. 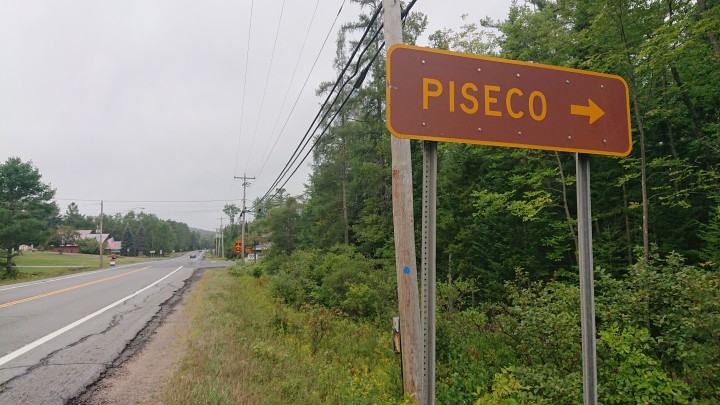 Halfway thru the roadwalk, I passed a nice little picnic table spot just for hikers! I kept going, it was raining. 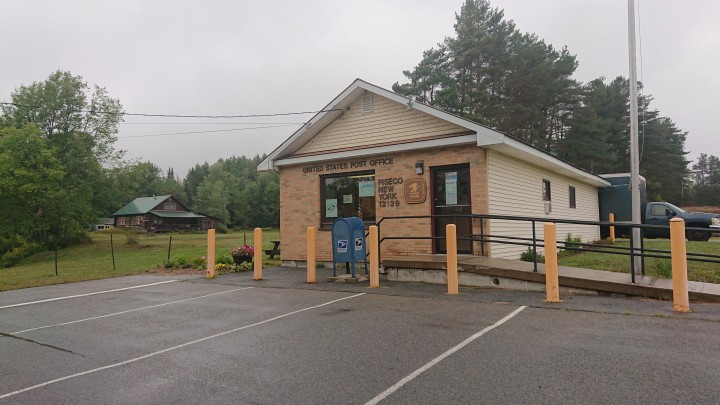 After an hour of roadwalking, my friends picked me up and we went to lunch at a diner in the nearby town of Speculator.

We all ordered the same thing, buffalo chicken sandwich, fries, and beer. The blueberry pie for dessert was pretty spectacular. They dropped me off back at the same spot, we said our goodbyes, and I hiked on into the rain.

The trail was an old road, so it was flat and wide for a couple of miles.

Apparently this section is also a Nordic ski trail. Coincidentally, we had discussed coming back and thru hiking this in winter.

After an hour, the trail started to climb and get rougher.

The rain had slowed to a mist, but the trees were all dripping, and I had plenty of signs of a wet forest. A massive fungi:

And a red eft: 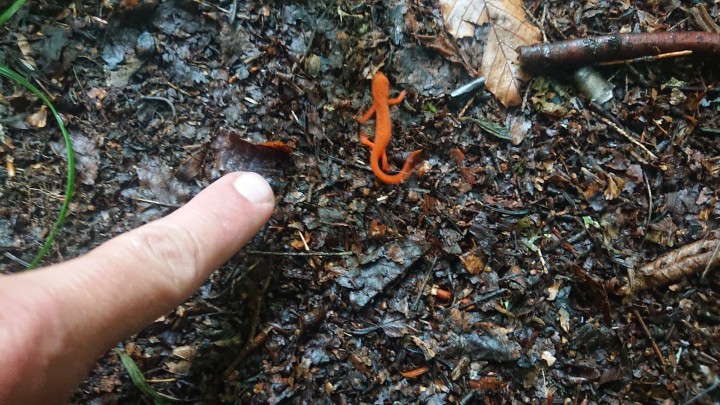 A few miles before camp, I saw this creature, and it ran up a tree. I have no idea what it was.

The damp forest continued, with ferns everywhere and the occasional stream ford. 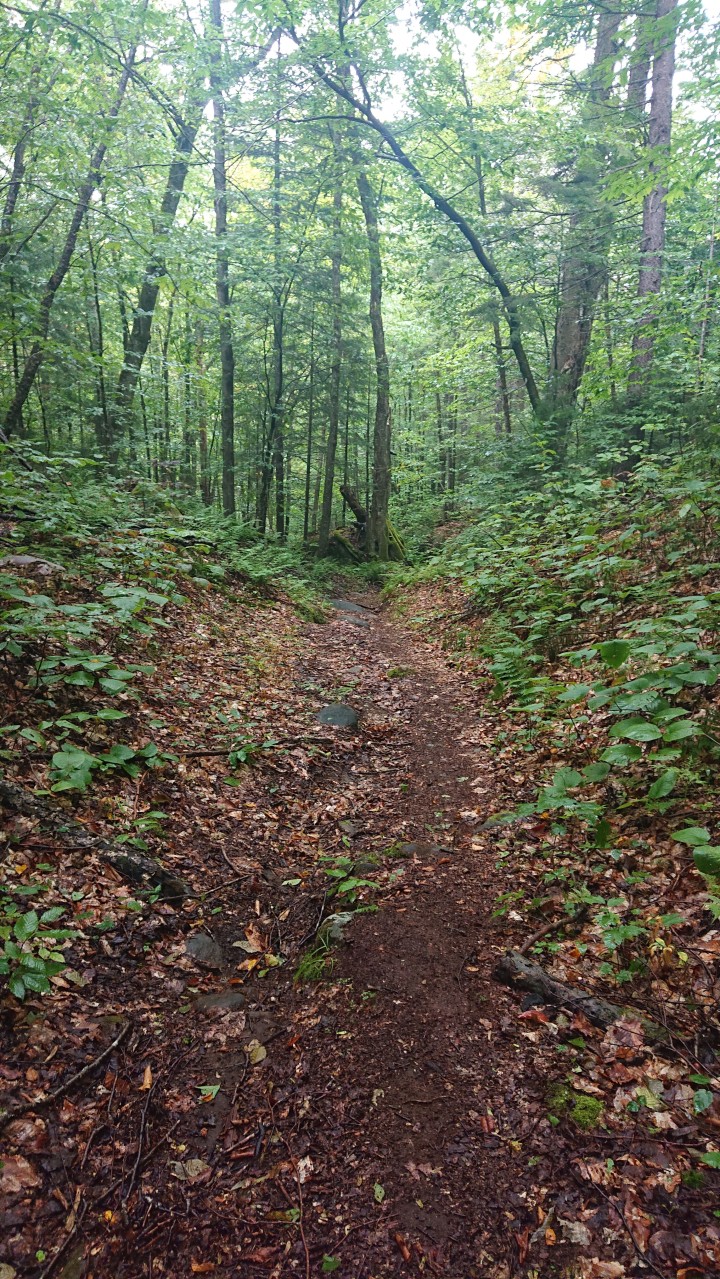 I arrived at my intended Lean-to at 6pm, and I was the only one there. 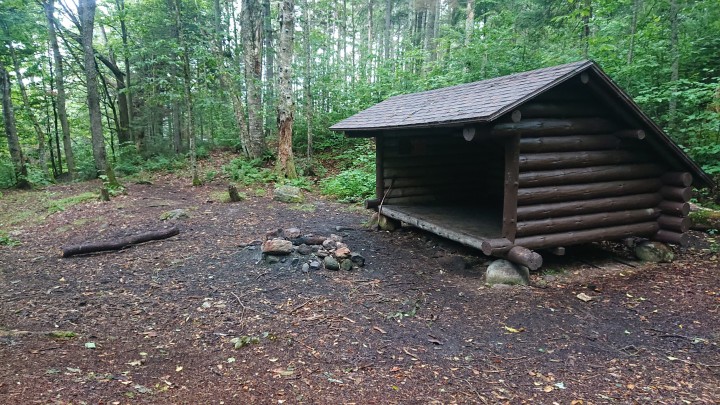 I dropped my pack inside, and walked down to the nearby lake. Spruce Lake looks huge.

It even had a canoe! And this one looked much more seaworthy than the previous canoes.

I don’t usually camp inside Lean-tos, but it was raining and I had it to myself. I made dinner, had a delicious IPA, and read my book. By 9pm I was falling asleep as the light rain continued falling.