It felt great to sleep in late until 7:30am, and even better to not have to put shoes on to get breakfast! After one last shower and some final packing, we drove back to the trailhead. It was 11am and lightly raining, so it was a quick goodbye.

It was a quiet day on trail, and I saw almost no one. I passed by a shelter after a mile, and it was one of the nicest ones I’ve seen in awhile. Cooking pavilion, benches, flowers, multiple campfire rings, etc. 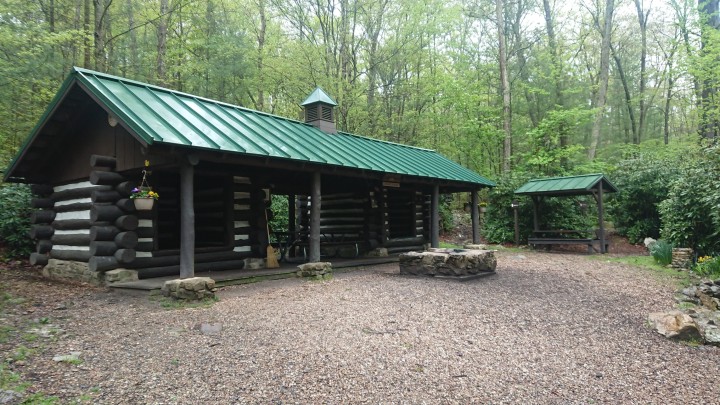 I continued on, and it started to rain more steadily.

I met one couple at the next shelter, who had stopped early at 2pm. I grabbed a snack and a break there, under a dry roof. The next shelter was only 6 miles away, so I continued on. Along the way, I passed the halfway mark!

It was last year’s marker, so it was off by a few tenths of a mile, since the trail changes slightly every year. But close enough!

There was a burn area at the top of a hill. The sign said that Pennsylvania’s DNR had done a prescribed burn here in the Micheaux forest.

I got to the shelter at 5:15pm, and one other guy was there, Max from Toronto. Another couple showed up at 7pm, and we had a full house! The rain should stop tonight, so hopefully it’s a dry day tomorrow.