It rained in the morning, so I opted to start hiking right after lunch. The vegetation was still wet, but it was a well-marked and wide trail, so I had no problem staying dry.

After a couple miles of easy, flat hiking, the trail climbed back up to another ridge. I’m always amazed at how the rock here forms in such orthagonal shapes. In this section, it made a vertical cliff to the west! 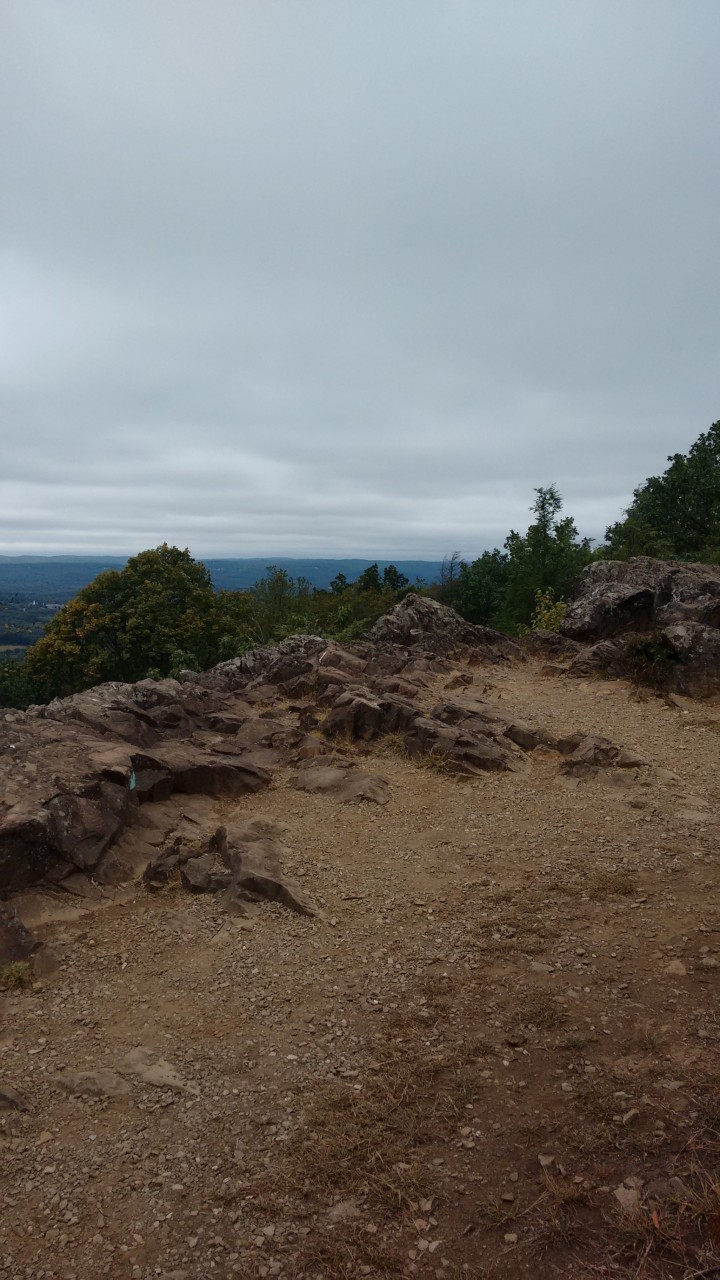 After an captivating mile of ridge-walking, I came upon a tiny pavililion next to the trail, which contained quite a surprise…a Snapple machine! Wtf?? 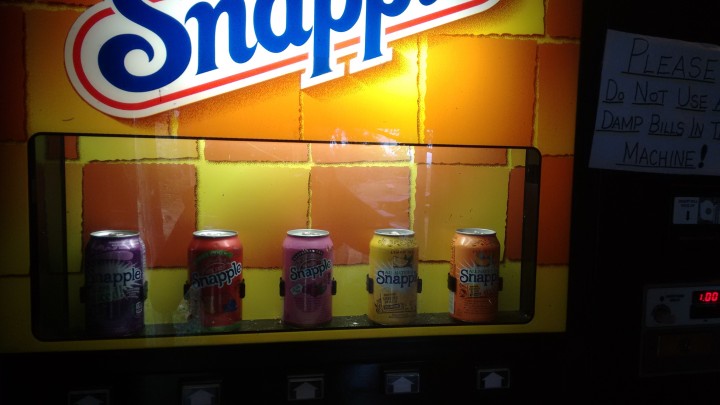 Of course, I put in $1 to have a nice cold drink (it was a warm 70F/21C). After I had hiked another minute, I came around a corner to find a giant tower. Well, that explains why there was a snapple machine way up here!

It was called Heublein Tower, and it stands 165ft/50m tall. It was built by a wealthy industrialist in 1914, who the owner of A1 steak sauce, and Smirnoff vodka. Fascinating.

I took a nice long break at the tower, and then hiked back into the woods. The trail kept undulating up and down the rock formations, and they were so geometrically fascinating. It kinda reminded me of Devil’s Postpile NM in California.

A mile later, I came upon a trail junction, which was probably the most well-marked spot on this entire trail. I counted at least 70 cairns!

Cairns had even sprouted in the surrounding trees, so strange.

I will admit, some of them were very creative.

This ridge was full of historic artifacts! This was the remains of Mr. Veeder’s family cabin, another wealthy industrialist from the early 1900’s.

I stopped for a break on a nice open rocky spot, and I could still see the Heublein tower, about 5 miles to the south. 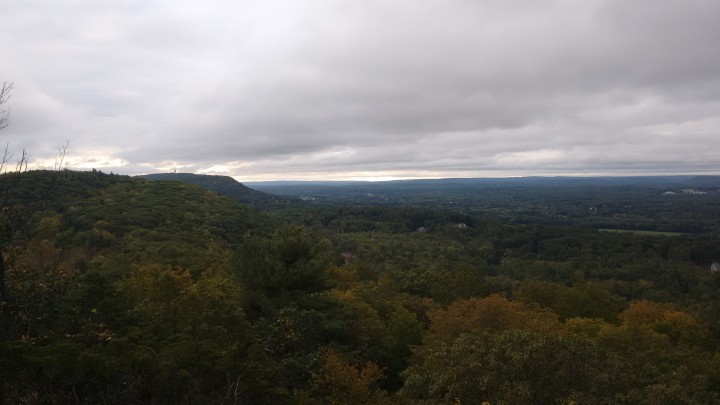 This was another historic structure, but it didn’t have any information or plaques to describe it.

I was aiming for an established campsite tonight, which the map described as having tent platforms, picnic tables, and even a privy.  Even though the sun set at 6:30pm, I kept hiking for another hour, and I ended up hiking the last 20 minutes by headlamp.

Finally, home for the night! It was almost 8pm by the time I arrived at the Windsor Locks tentsite, and I almost missed this sign in the dark.

I setup away from the main area, as I could see a couple other tents here. After a well-earned dinner of spicy ramen with chicken, I decided to catch up some old favorites… 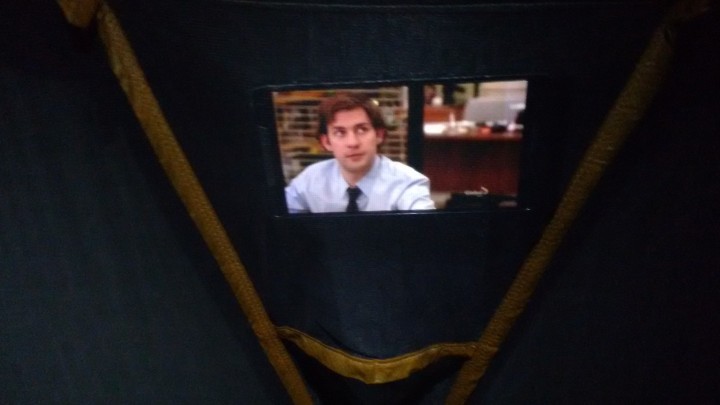 My tent ceiling has a mesh pocket, which perfectly fits my phone, and I laid in my sleeping bag and watched shows on Hulu! After a couple episodes, I checked the weather, tomorrow looks warm and sunny!

Today was the first day of October, and the sunrise isn’t occuring until almost 7am. I was in no hurry to get moving, since it was also pretty cold (below 50F/10C). I was finally making northward progress by 8am, and it was a beautiful sunny morning!

The ridgeline had faded away, and for most of the morning, the trail traversed a warm, green valley. It must’ve been migration season, there were butterflies everywhere too!

A random trail marker in a sea of ferns. 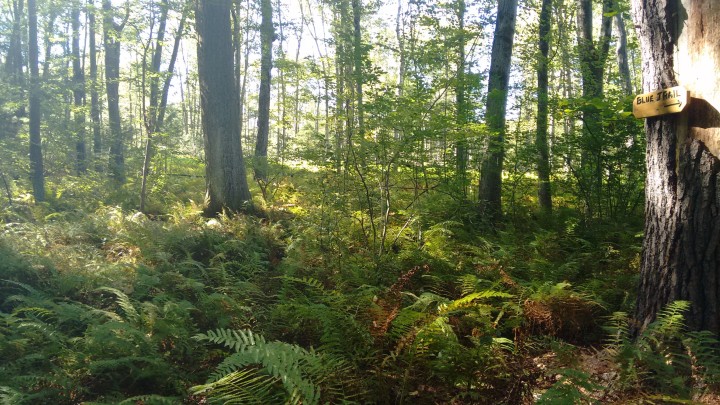 Around 11:30am, I had officially crossed into Massachusetts! 115 miles down, 90 to go. From here, the blazes suddenly changed from blue to white.

About a mile later, I crossed a road, and came to a beautiful new trail bridge, along with a dedication stone. 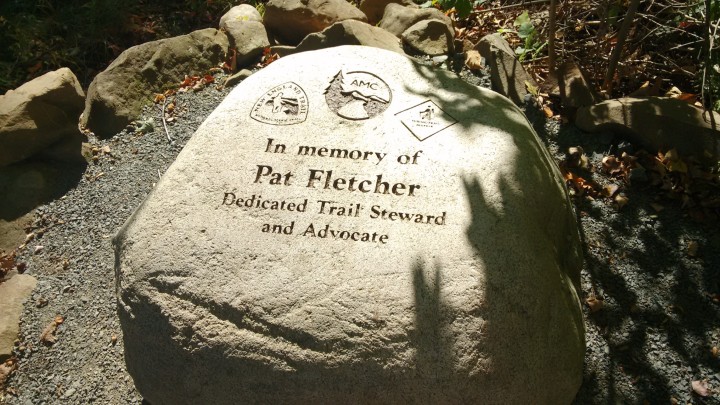 It was close enough to lunchtime, and the rock provided a flat spot to sit, so I stopped and enjoyed my leftover thai-chicken pizza. Yum.

After a nice long break, I continued across the bridge. The marsh was enjoyable to look at from the dry safety of the bridge. I was glad I didn’t hike this part in the spring, I imagine the bugs would be terrible. 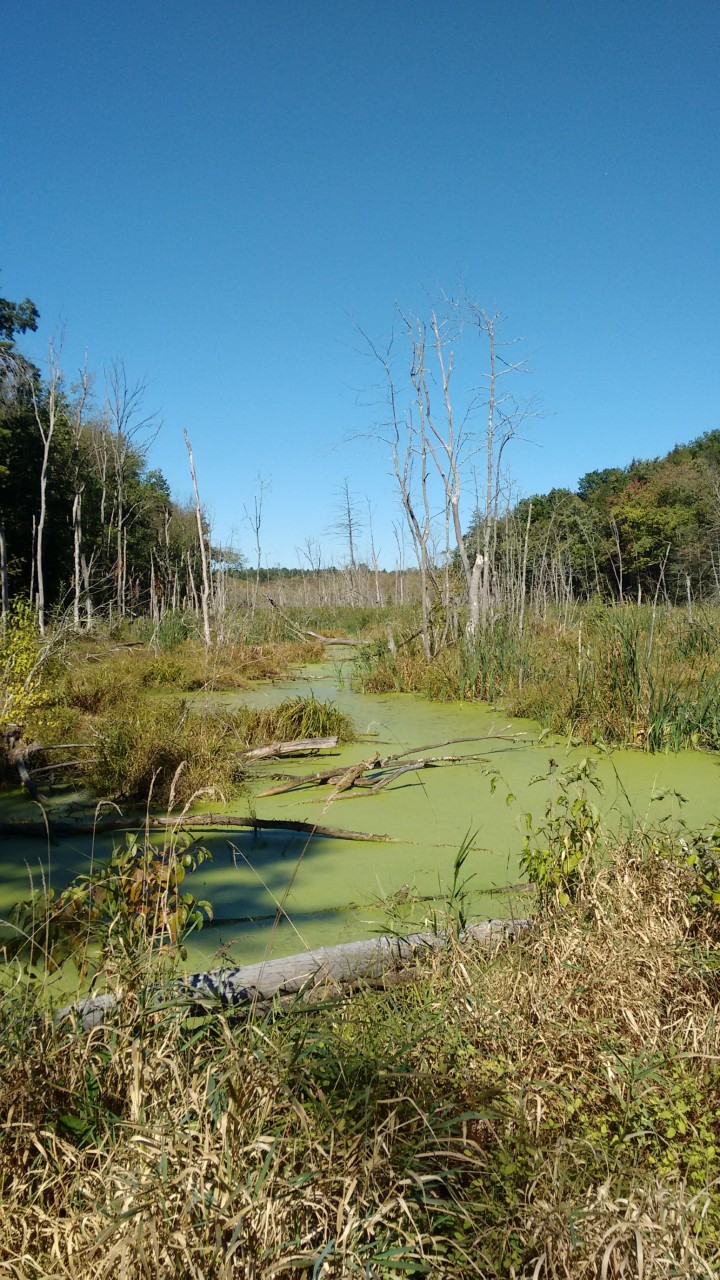 I hiked along a ridge for an hour, and it was perfect weather. As the trail neared the next road crossing, it took some confusing turns through private property, which also happened to be the Agawam archery club. So, it was probably not the best place to be wandering through the woods! After I crossed the road, I hiked through an old abandoned quarry, and then steeply up to Provin Mountain. It had a firetower! I was able to walk up the stairs, but the hatch to the top was locked. 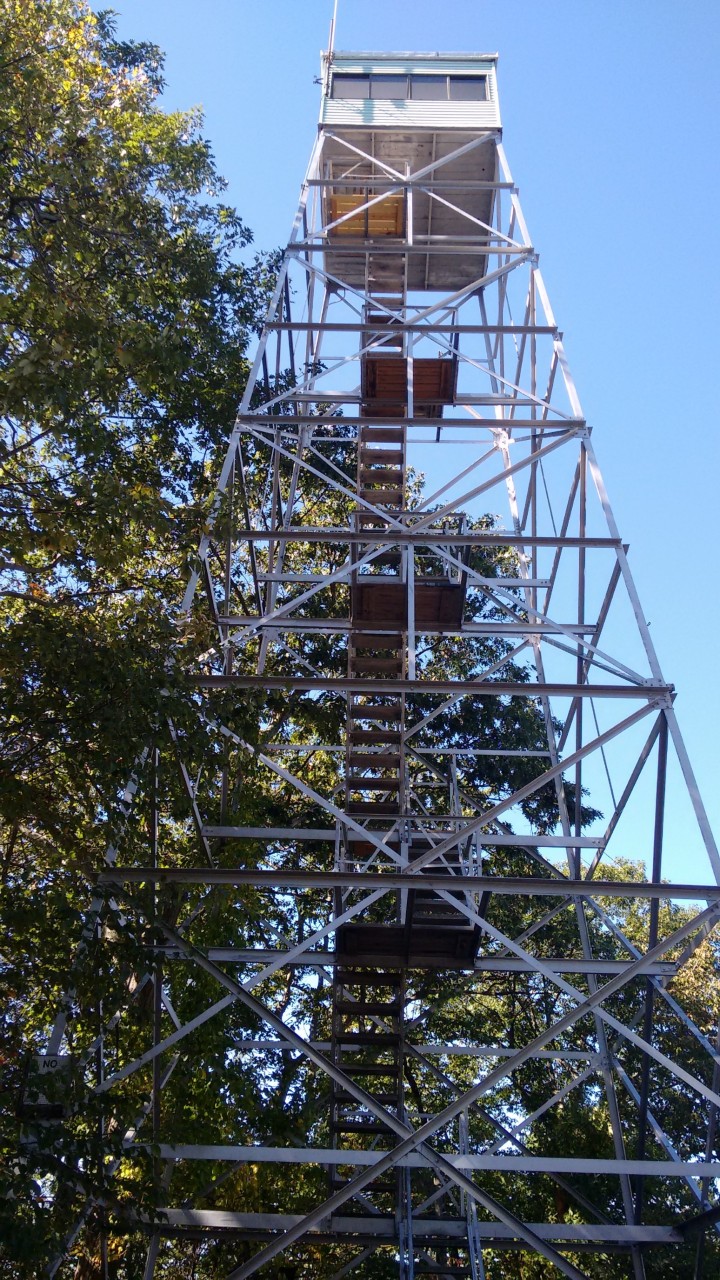 I hiked along for a couple of miles on the ridge, then dropped steeply down to the Westfield River. Much to my surprise, it was a large river, and it was unbridged. I investigated the layout for a couple minutes, determined it was only knee-deep, and then easily crossed. I wouldn’t want to have to do this crossing in springtime, or in cold weather!

After crossing the river, the trail climbed the opposite embankment, and I was instantly in a large parking lot. I managed to figure out where the trail went, and I sloshed across the parking lot and road with heavy shoes. After an hour, my shoes had mostly dried, and I took a break at a tunnel under the I-90 (masspike). Immediately after the tunnel was a super steep climb, up and up, until finally I was on this beautiful ridge.

I’ve noticed that the rock formations here always drop off steeply to the west, never to the east. So again, here is a nice view of the valley to the west, and I think the Barnes airstrip.

About a mile before my finish spot, I came to this mysterious junction. I was ahead of schedule, and tempted to investigate, but….the name wasn’t selling it. Moving on…

I arrived at the US202 highway trailhead, and I decided to end here for this segment. It was another 4.7miles/7.5km to the next road crossing, and it was already 5:30pm.

I summoned another Uber, and was dropped back at my car 30 minutes later. I’m planning to come back to the trail in two weeks for the next section, and then hike the final section in late October before it gets too cold!