I woke up at 6am, ate a cold breakfast of Belvita and poptarts, and we were on trail at 6:45am. We apparently camped at a “no camping” spot…oops! 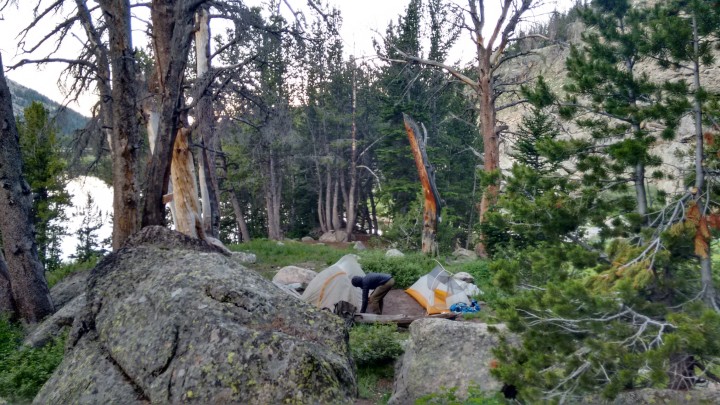 We found a climbing nut while packing up! Weird. 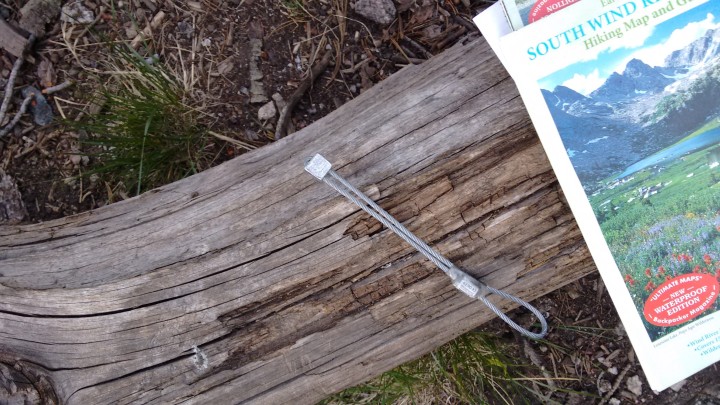 We hiked up the steady switchbacks, following a nice trail. Upon crossing a creek a mile later, the nice trail disappeared. We followed a series of social trails up to a lake, and saw a few other parties camping. I had a nice 2nd breakfast at a scenic spot nearby.

After we ascended above the lake, the trail looked familiar to me, but also strange since I was heading in the opposite direction from last year. 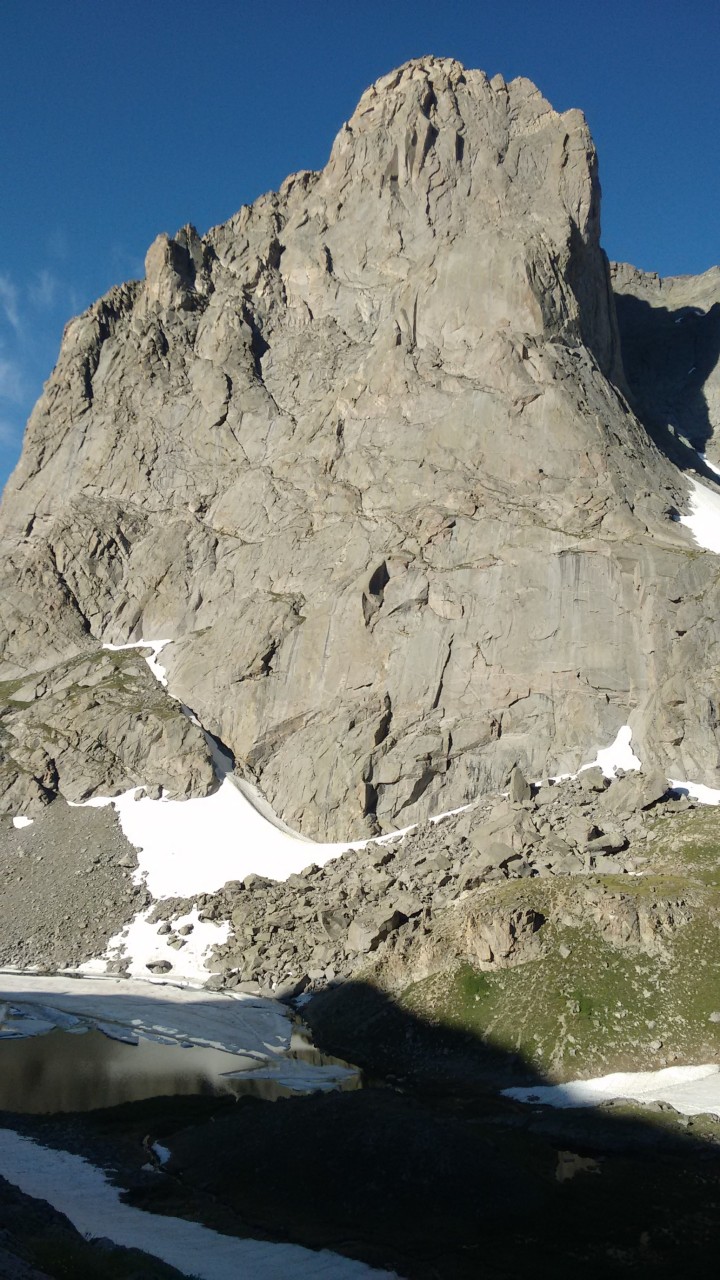 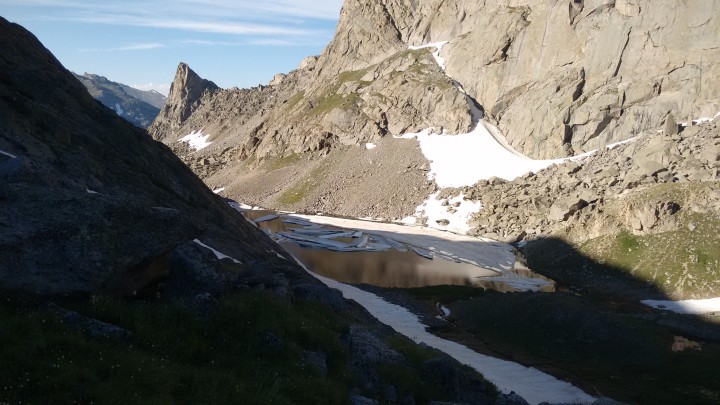 The upper trail was new to Quickham – he took a lower trail last year on the CDT. We hiked over Jackass Pass, and then descended to Lonesome Lake. 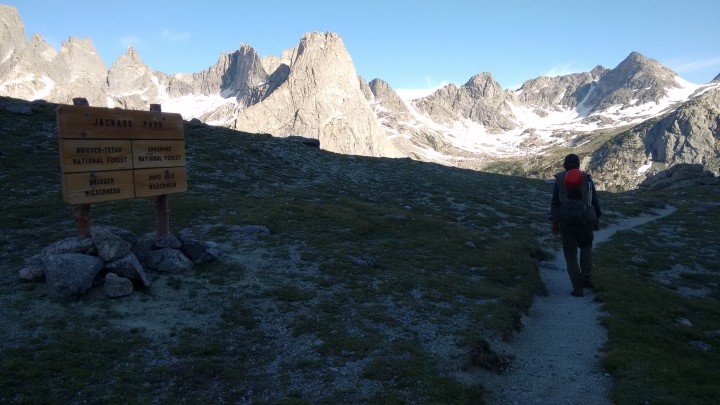 Cirque of the Towers, with Lonesome Lake in the middle. Amazing!

The alpine squirrels were watching us as we passed by.

There were many snowfields at the bottom. We met a camper who said he’s never seen this much snow or mosquitoes in his 15 years of coming here. We made our way across the outlet of the lake, which was a knee-deep ford this year. After circling the lake, we began the climb to the next pass. About 500ft up, we had a quick break to look around.

And I was apparently posing for a hiking calendar…? 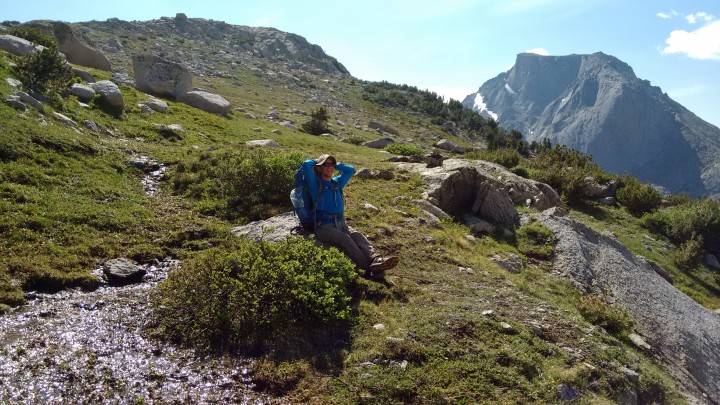 Upon closer inspection and discussion, we decided that NY pass isn’t safe, as there was a huge cornice.

So, we climbed Texas Pass instead, which added just over a mile. One positive, we got to “mess with Texas”, which is always a good idea. 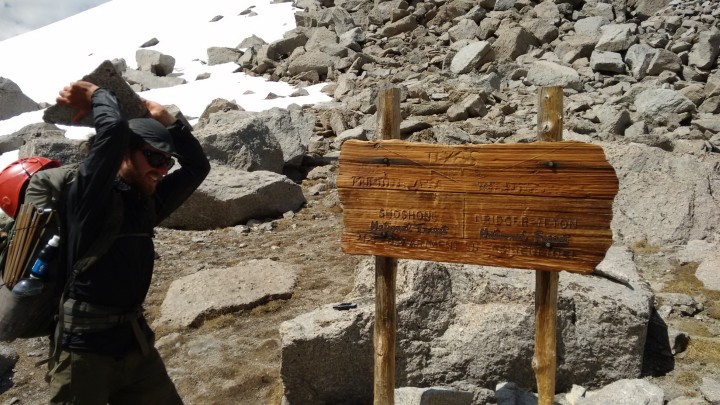 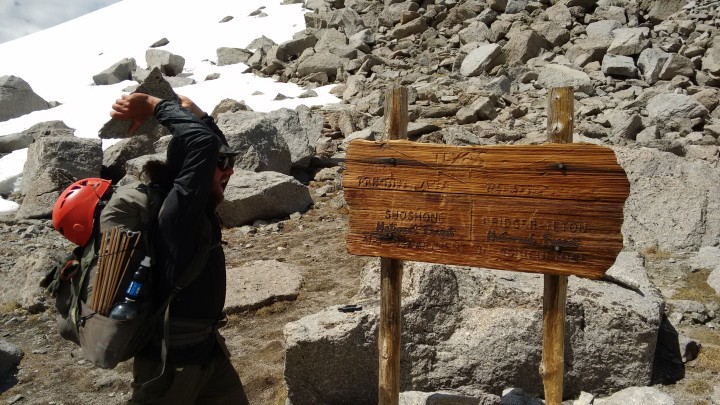 We descended the north side of Texas Pass, which was surprisingly mostly snow-free. It still felt weird hiking this part in reverse.

We continued past several alpine lakes, which still had a decent amount of snow cover.

We pass a group of four hikers going the opposite direction, they were out for a quick 4 day trip.

We stopped for lunch just before joining the trail by Shadow Lake. The views were great, but the mosquitoes were insane. Not surprisingly, it’s difficult to eat while wearing a headnet.

We cruised down the nice trail for 2 miles to a junction, then passed a father/daughter duo on our way to Skull Lake. 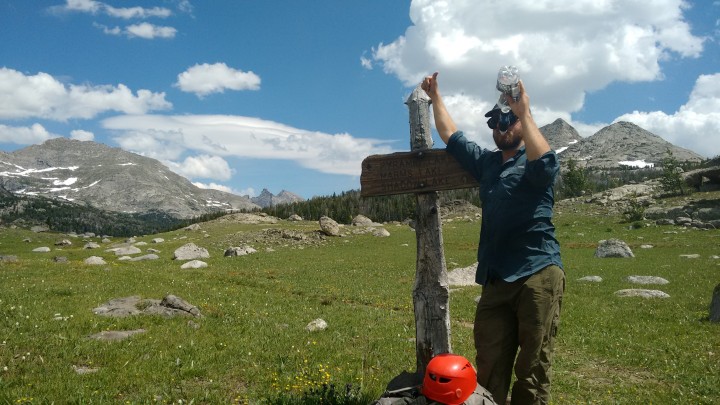 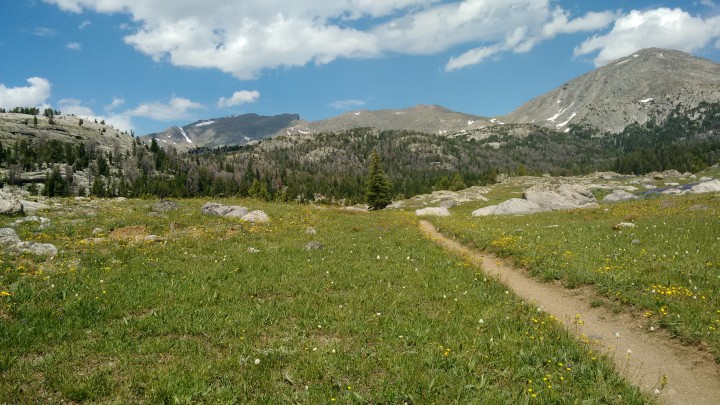 We left the trail at the north end of the Lake, just as the sky started to look ominous with dark clouds. We bushwhacked down to a stream and easily crossed it in ankle deep water.

We followed another fork upstream for a very pleasant hour – it was all open slabs and trees! It was the most amazing “bushwhacking” I’ve ever done. Then, a flat gravel/grass field lead to another easy stream crossing. 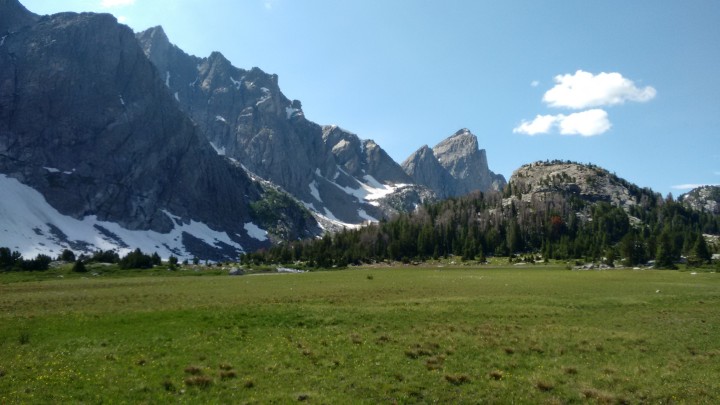 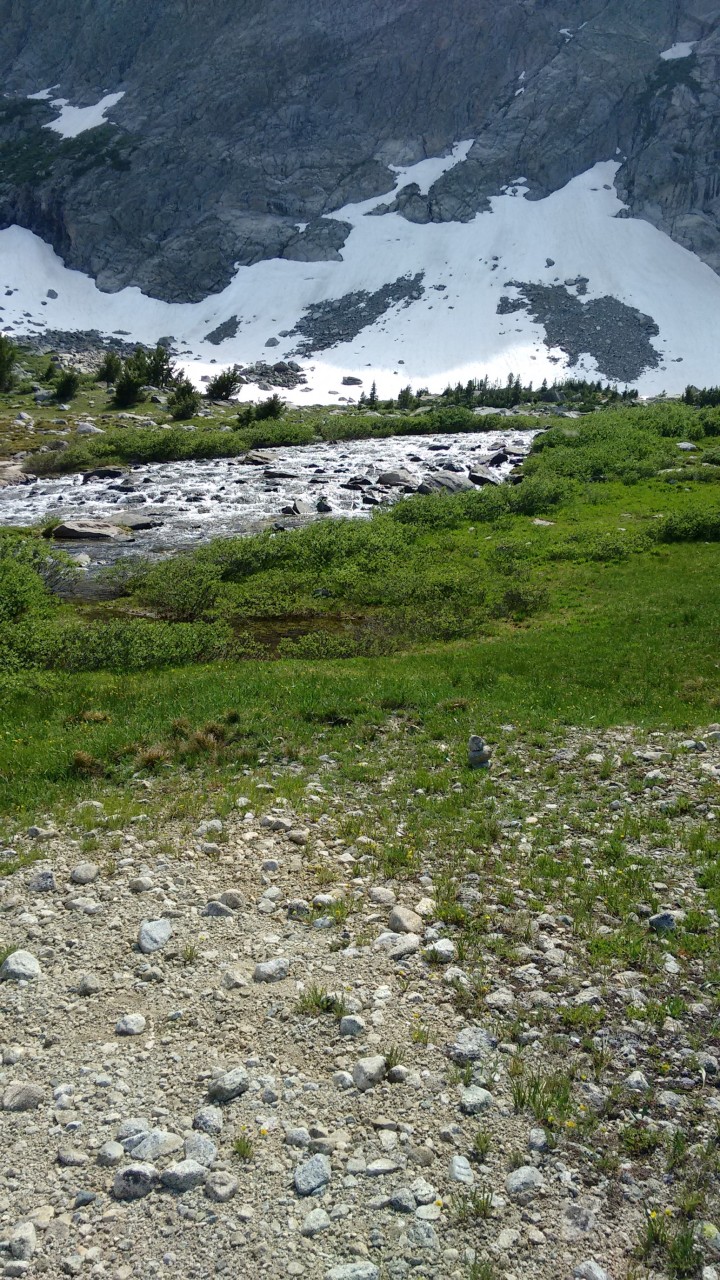 Quickham and I took turns leading the last segment, which followed a stream uphill.

We gradually climbed past several alpine lakes, the last two had some ice in them! 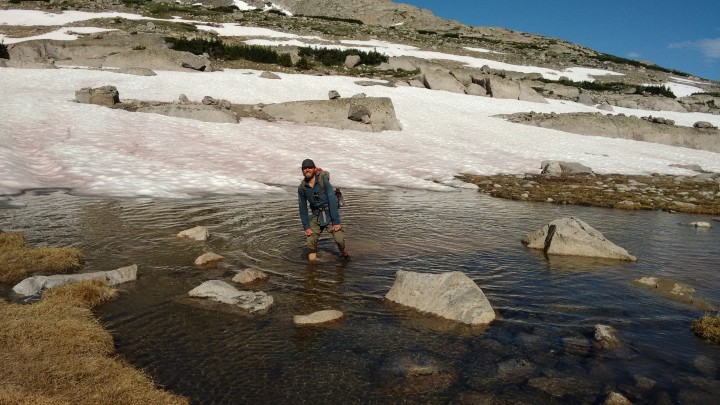 A marmot came by, they’re always looking for food. 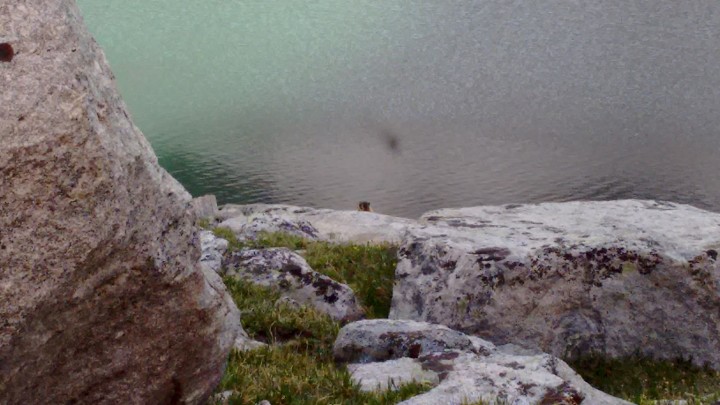 We got to our intended destination, an unnamed lake below Raid Peak Pass, at 5:30pm. Nice and early! We set up camp, cooked, battled mosquitoes, and discussed the day.

The Ursacks are great! They protect your food from critters and bears, and don’t need to be hung from a tree, which is especially handy when there aren’t any trees around. I tied it around a large rock. 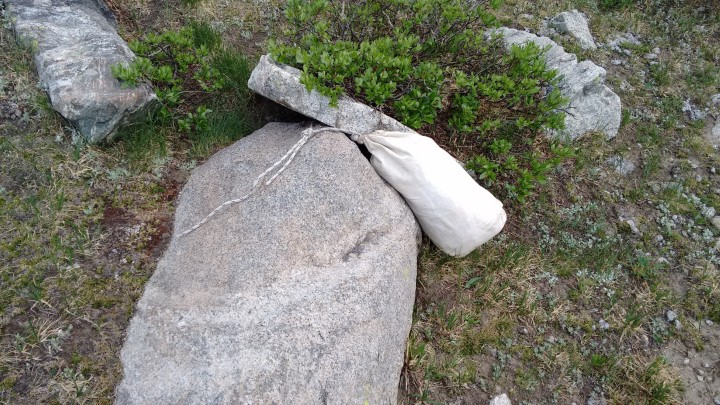 I was in my tent by 7:30pm, and so excited by that! My ribs still hurt from the fall yesterday, but I was asleep by 9pm.