We woke up at 6am, and ate a cold breakfast of bars and poptarts. We get packed up and are out of camp at 6:45am. 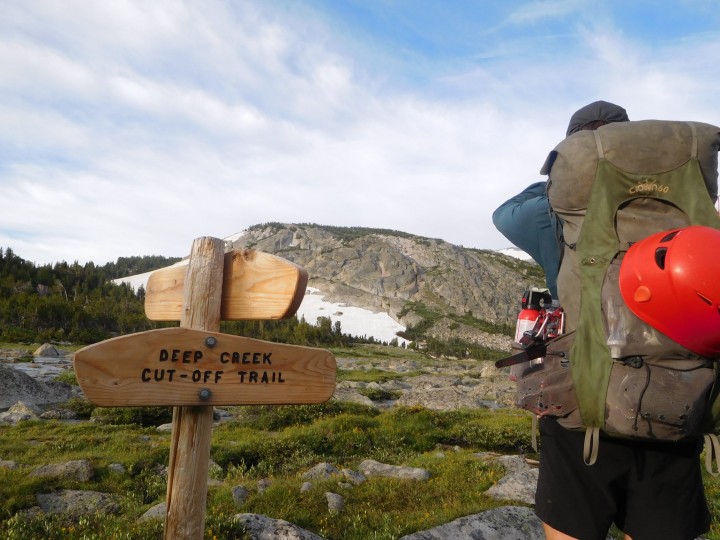 We soon climbed out of the trees, and into an alpine meadow next to the Deep Creek Lakes.

The trail ended apruptly at the lake outlet…time to plan a route across on rocks!

After rock-hopping halfway across the outlet, we are forced to ford the stream.

With wet feet, we continued another half mile before leaving the trail, and then bushwhacked up towards Wind River Peak. 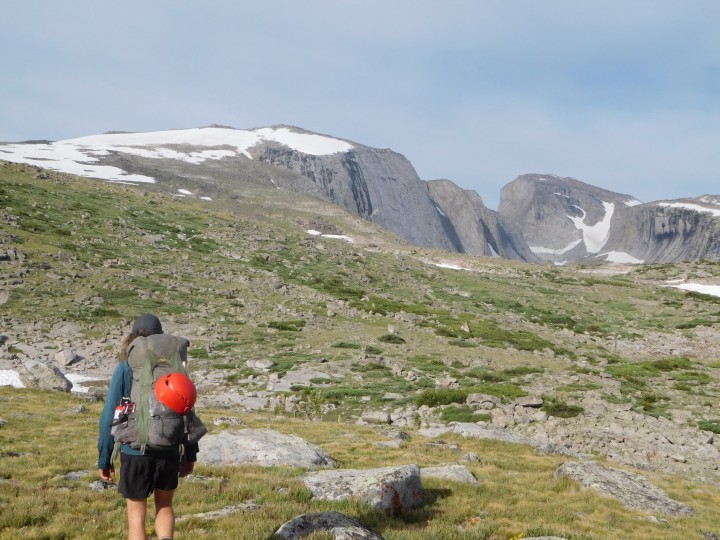 The vegetation subsided quickly, and soon we are traveling over rocky grass fields. 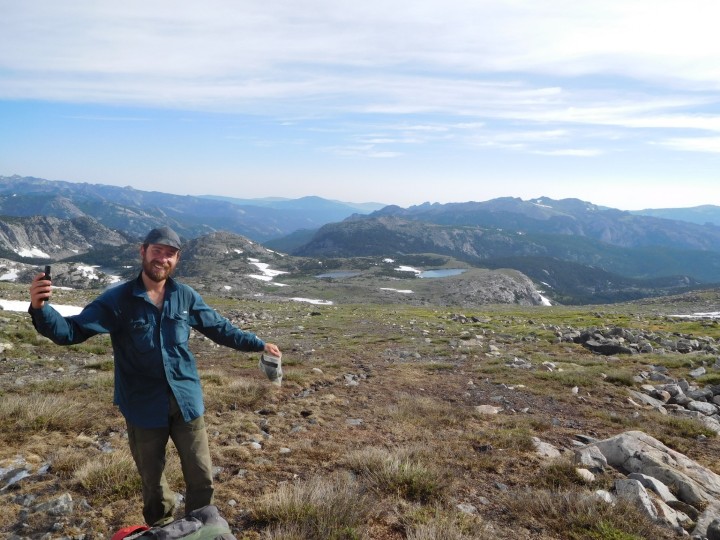 Those eventually gave way to low angle snowfields, interrupted by bands of rocks every quarter-mile.

After changing in and out of our crampons 3 times, we reached the summit at 11am, and have an early lunch.

The north face of the peak is a 1,000ft vertical drop, and the west side (our descent route) also looks very steep.

Quickham is cheesin’ it up on the summit of Wind River Peak.

The Winds are now my favorite wilderness in the Lower 48! 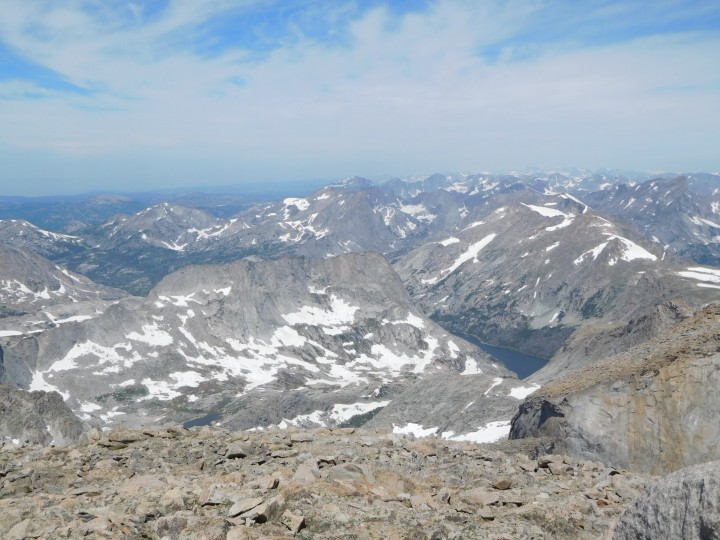 We found an unofficial trail register (a plastic screw case), and it was fun to read the old entries (from 1988!), and then we added our own entry. As we were leaving, we met a trio of guys from Lander just arriving. We swapped photographer roles, and then started down the west side of the peak.

The first 500ft of the descent wasn’t bad, just small talus or grassy rock-fields. Then, we traversed left into the West gully. It was steep, probably a black diamond ski slope, with lots of loose small and medium talus.

Quickham went first, and we made good progress for 1000 vertical feet. I also took a video to better show the steepness of our chosen route. 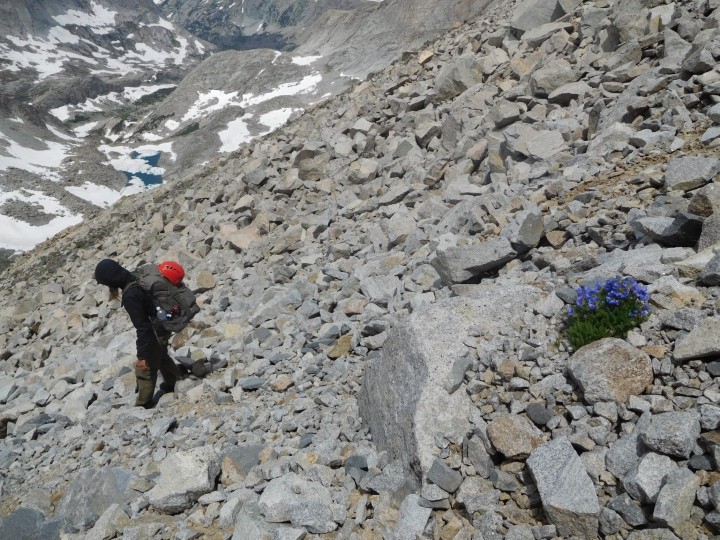 Then, the gully ended at a cliff band of black rocks, and we traversed left to get around it. Shortly after, we encountered a steep snowfield. We put on our shoe crampons (Kahtoola), and VERY carefully kicked steps and made our way down. We had no ice axes. The last section was less steep, so we moved quicker.

And then, I lost a foot placement, and started sliding faster and faster down the snow slope, with some rapidly approaching talus 200ft below. I tried to arrest (stop) with my bare hands, but it only prevented me from accelerating further. I used my feet to steer towards a lower-angled slope, and some less sharp talus. Eventually, after sliding 200 vertical feet (based on my altimeter) over snow and some rocks, I came to a stop on a large rock. I yelled to Quickham, “I’m OK, don’t hurry”, and sat on the flat rock. After a quick assessment, I determined that my camera was broken, and my ribs hurt, but I was seemingly uninjured. Quickham arrived 5 minutes later, and we took a quick 10 minute break. My hands were numb, raw, and cold. Eventually, we continued down the snow, now lower-angled and safer, to the bottom of the bowl. After a half-mile of snow walking, we got to a grassy spot with some dry rocks and took a long break. 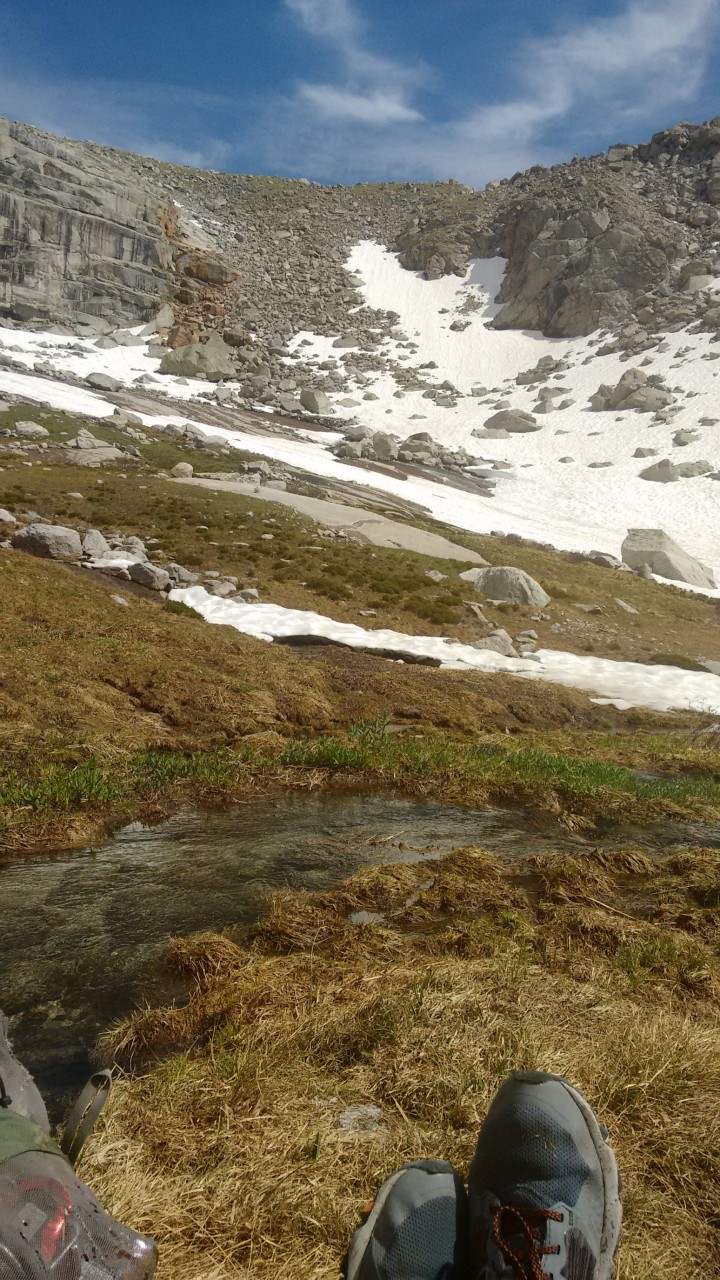 The rest of the day we were in sneakers, descending slabs or talus down to Black Joe lake. 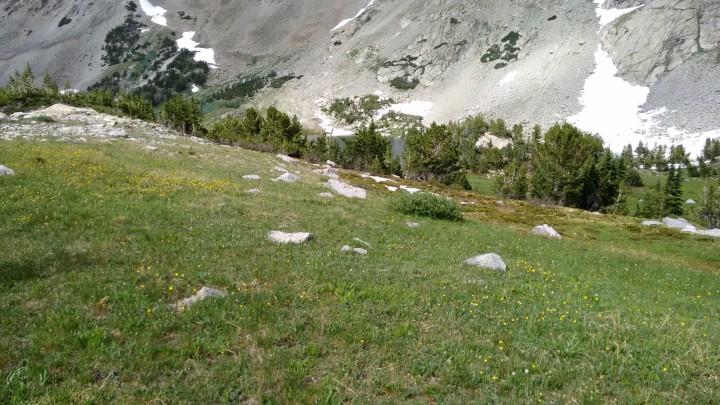 We bushwhacked along the north (right) shore of the lake, and then had to make an annoying/tiring 200ft climb to get around some cliffs. 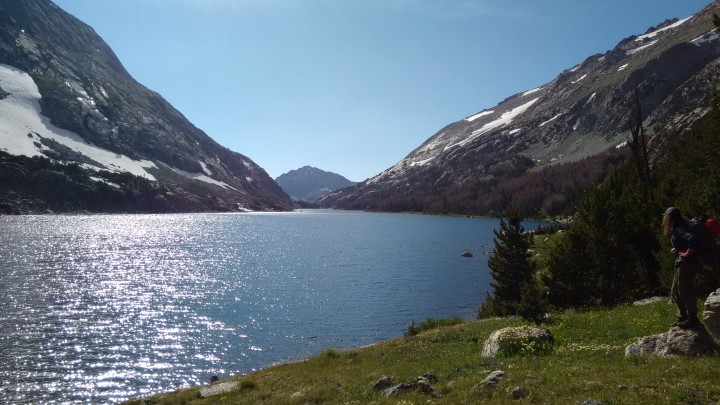 We joined a maintained trail, cruised down the trail for a mile to Big Sandy Lake, and made dinner by the stream crossing. And there was just enough of a wind to keep the mosquitoes away! 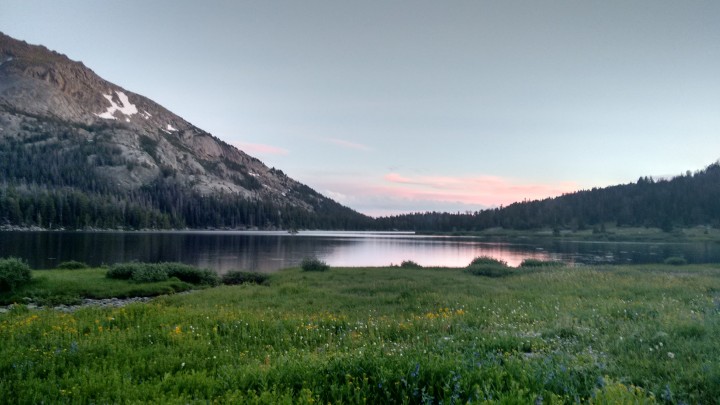 Quickham did some texting (on his InReach) with our food re-supply guy, and then we hiked the final quarter-mile to a campsite at the trail junction for Jackass Pass. We setup camp by 9pm, and after some discussion about the day, we’re quickly asleep.