I naturally woke up at 5:45, I guess I’m all caught up on sleep! After packing up my tent, I walked over to the picnic table and noticed the moonset! 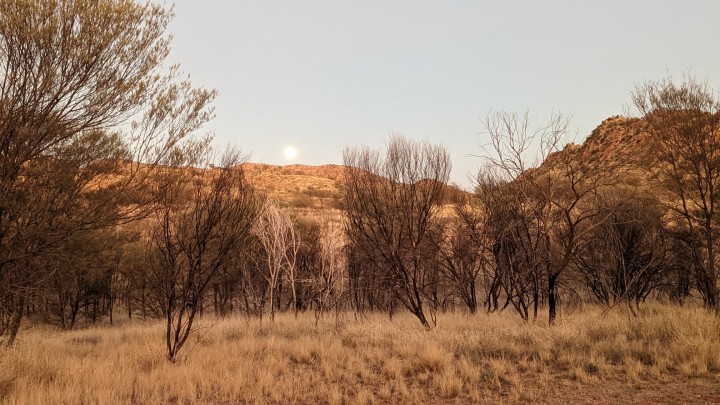 A few minutes down the trail, and I saw the sunrise too. 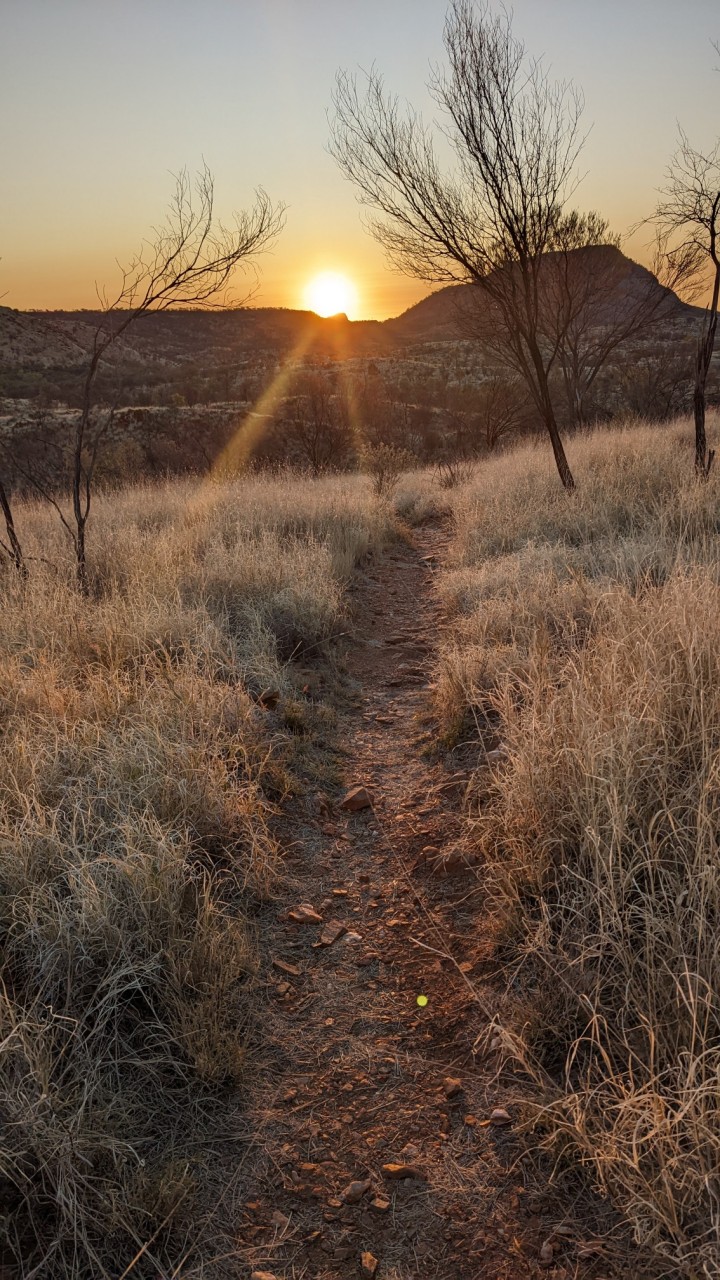 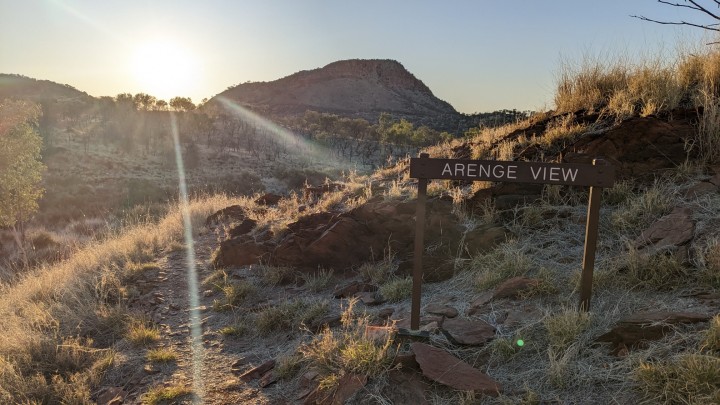 I cruised along on an easy trail all morning, looking around at the sights and ridges around me. After a couple of hours I came to a trail junction for the Woodland trail. It’s a 16km interpretive loop trail that starts at Simpsons Gap. 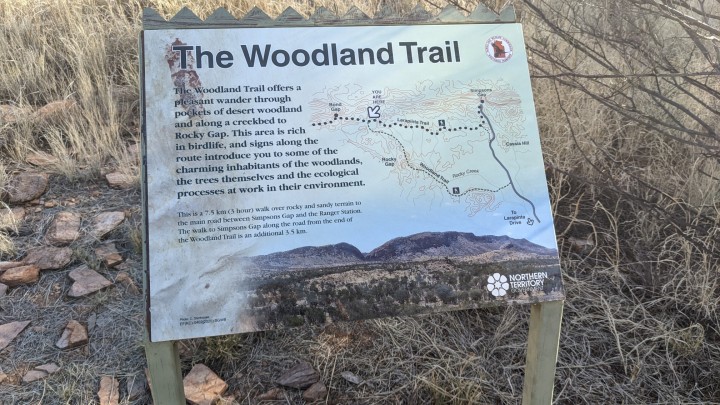 There wasn’t much notable to mention all morning, just more easy trail . 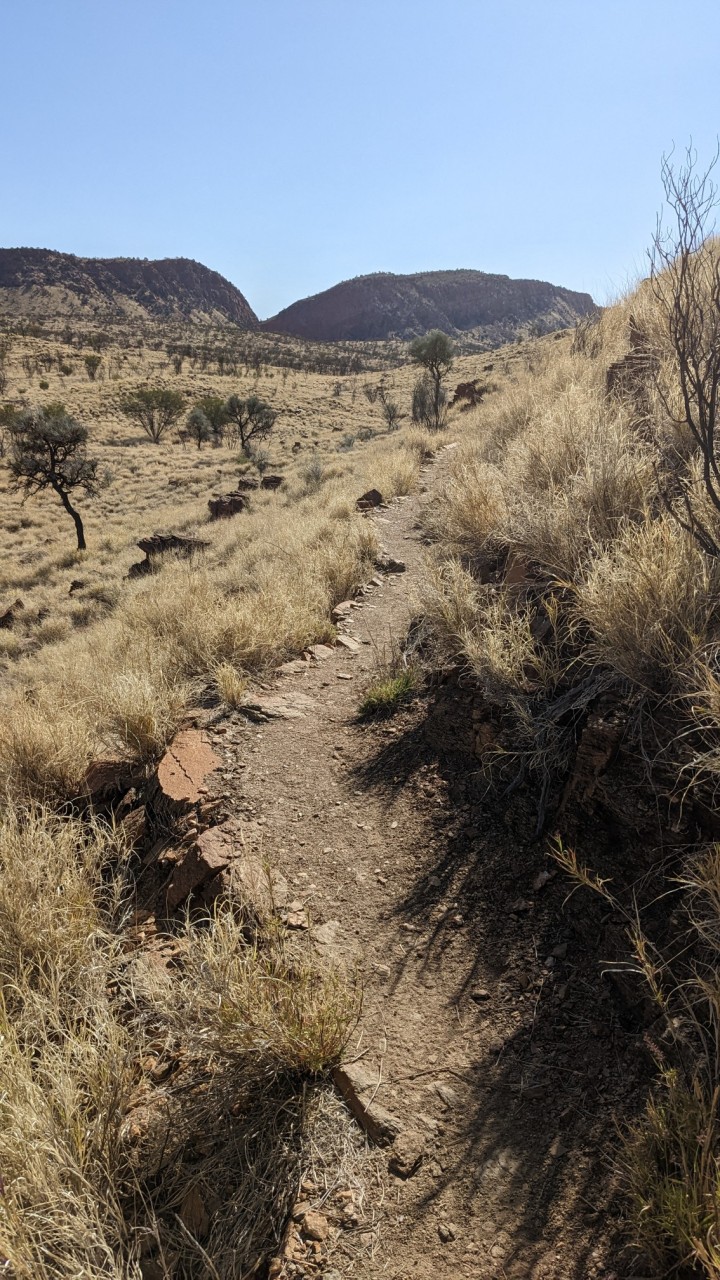 Finally, I spotted Simpsons gap in the distance. It’s another gorge cut through the mountains range, and like most of the others, it is accessible by road and is popular with tourists. 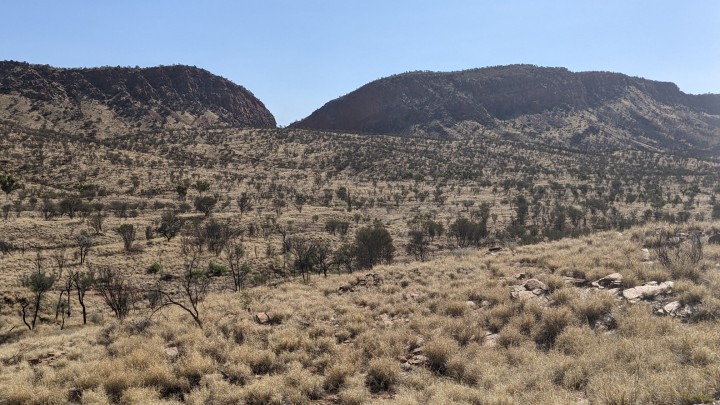 When I entered Simpsons Gap, the trail weirdly went under a roofed six-sided shelter.

Near the parking lot there were bathrooms, picnic tables, BBQs, and this cool cell phone reception dish.

It was early, just after 10am, so I decided to do the quick 10-minute side trail to Simpsons Gap. 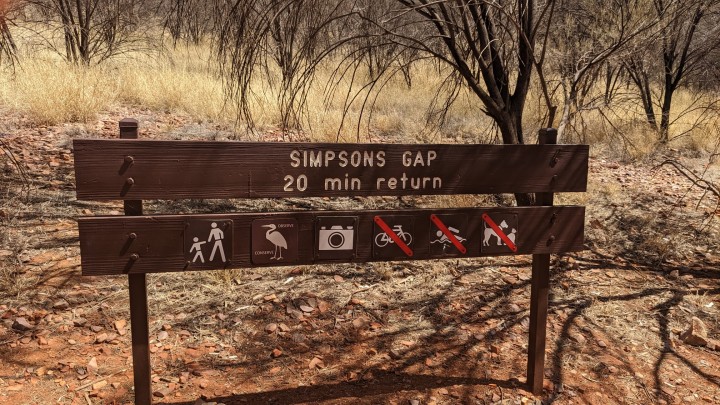 I’m fascinated by some of the symbols on the sign. Like, who takes cats to a park? Are those two stick figures in a tug-of-war? The answers would have to wait…onward! 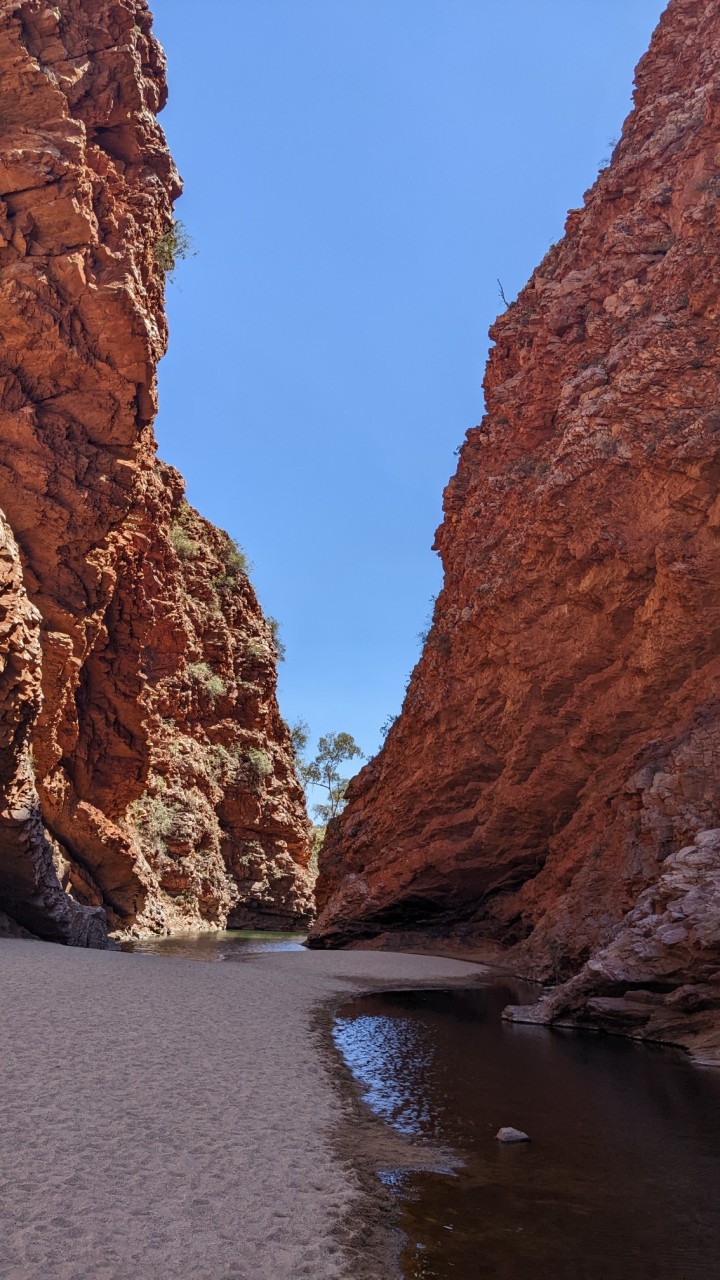 I walked as far as I could into the gap before I was stopped by a larger pool of water. 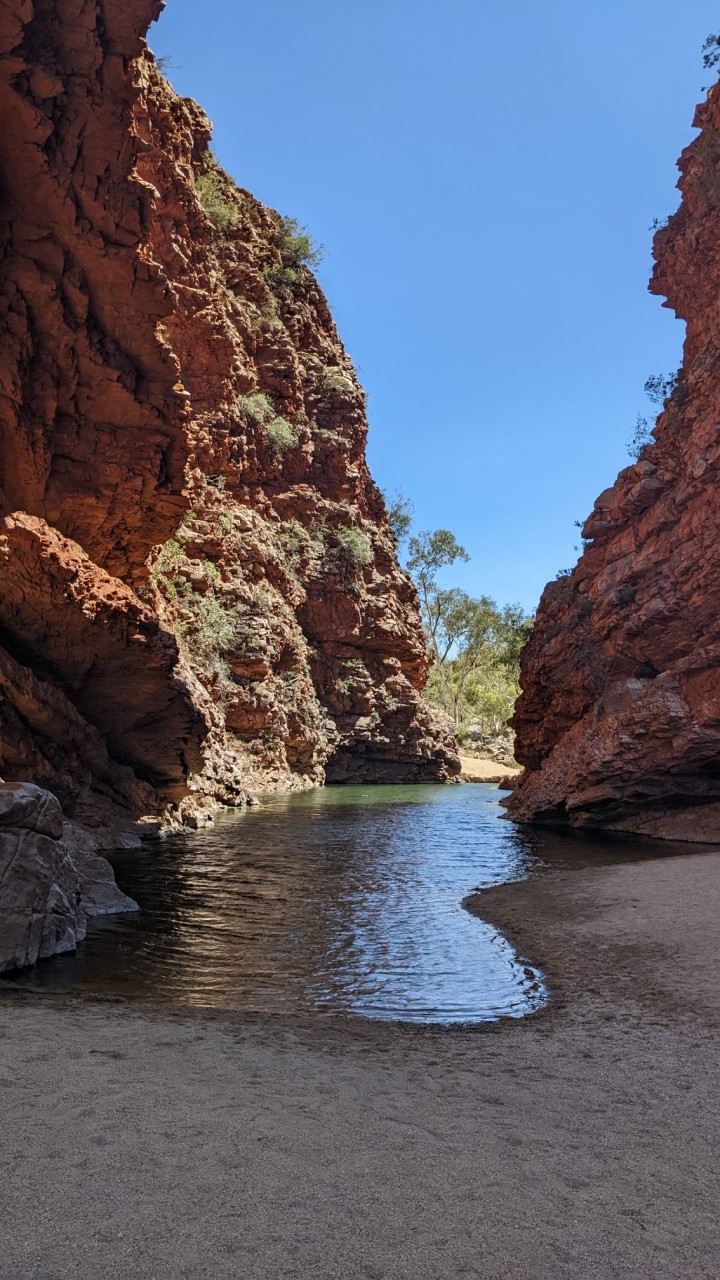 This was another gorge where the signs indicated no swimming was allowed. Bummer. After a nice cool morning, it’s hot now! I soaked my feet in the cold water and then hiked out. 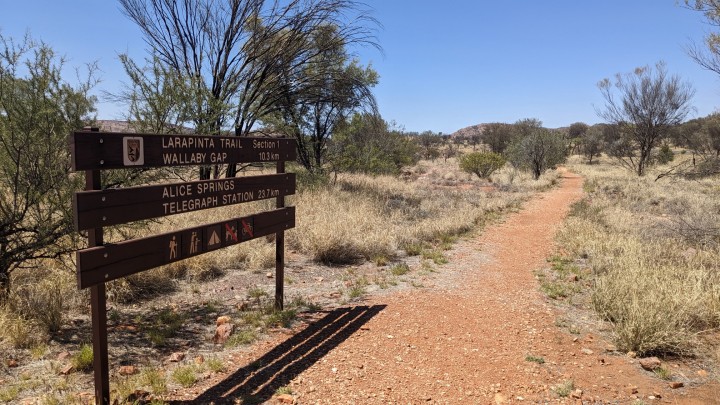 Only 10km to Wallaby Gap! I planned on camping at Wallaby Gap tonight, which would leave only 13km for tomorrow to the finish. Perfect, since tomorrow is supposed to be brutally hot and I want to be done by 10am.

It was only 11am, so I hiked an hour to the top of a hill and had lunch in the shade up there.

I finished my lunch and now it was quite warm, like 29C. But it was only 7km to camp, so I slowly hiked onward, and it definitely helped that the trail was flat and easy to hike. I saw some tracks in the trail, I think a snake had just been here. Wildlife!

There were a couple of short side trails along the way, leading to what were probably dried up springs. Scorpion spring sounded especially unappealing.

I pulled into Wallaby Gap just after 2pm and sat in the shade of the shelter for awhile. 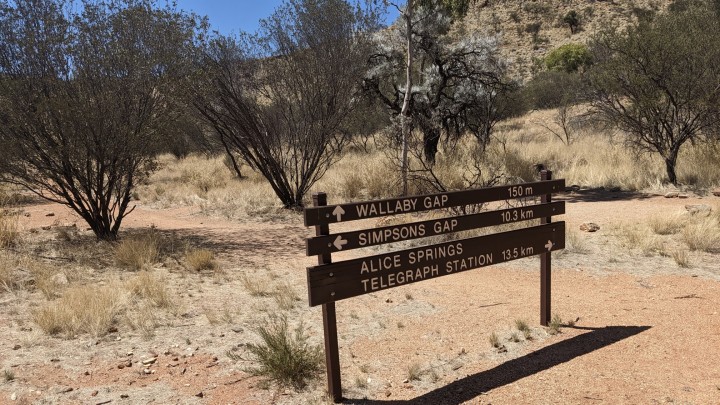 It was a weird wooden octagonal-shaped shelter, unlike any of the others I’d seen so far. It didn’t have the usual storage cabinets to protect your food from rodents, or USB chargers. But it was much cooler in the shade….so I laid on one of the benches and took a nap!

I woke up an hour later and decided to go check out the water hole in Wallaby Gap.

It was only a 5 minute walk, but wasn’t really worth it. The water was mostly dried up, and what remained was full of green scum.

I wandered back to the campsite and saw some large lizards crawling thru the rafters of the shelter! More wildlife! I enticed them to the opposite side of the shelter as me, as I didn’t want them dropping onto my head. I sat down and read some of my book, and eventually I started making dinner.

The temperatures really cooled down as soon as the sun went behind the hill. Today’s high temperature was “only” 29C, tomorrow is supposed to be 36C (human body temp is 37!)… glad I’m finishing early tomorrow!