I packed up my tent by headlamp, and hiked out at 6am. It was an easy uphill walk, and felt good in the morning chill. 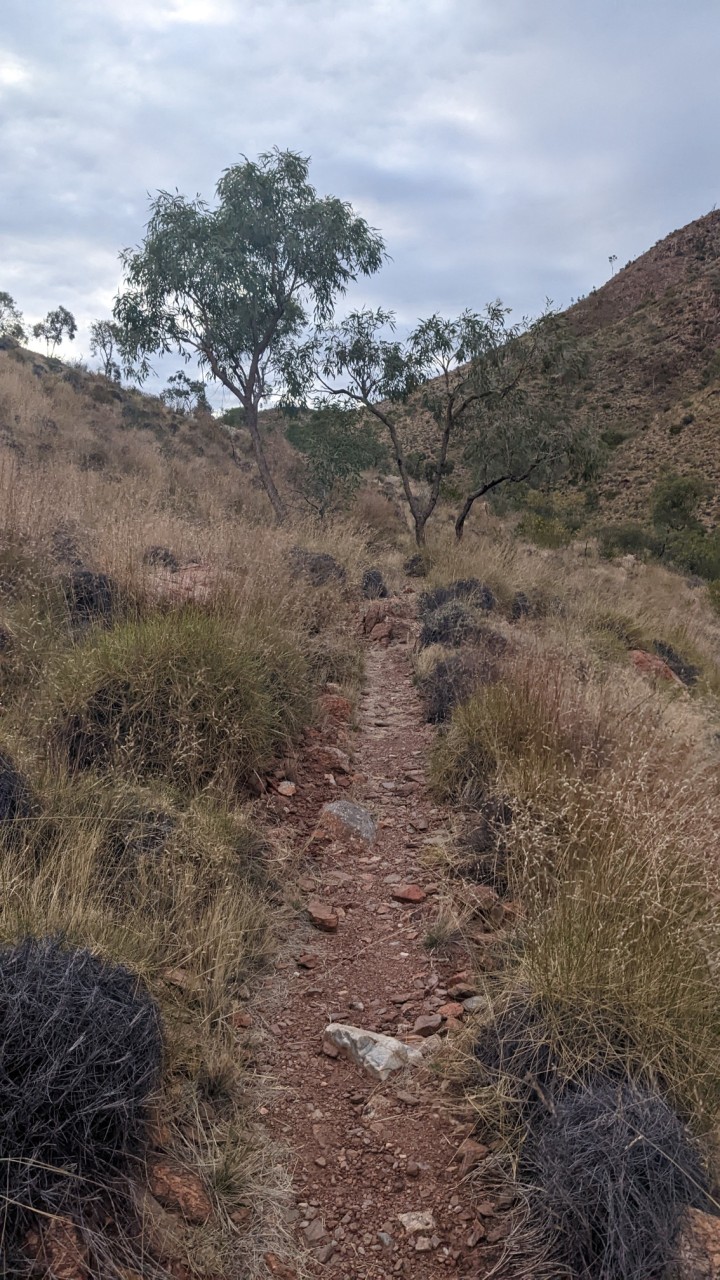 This was the first of three climbs today, and it was by far the easiest. 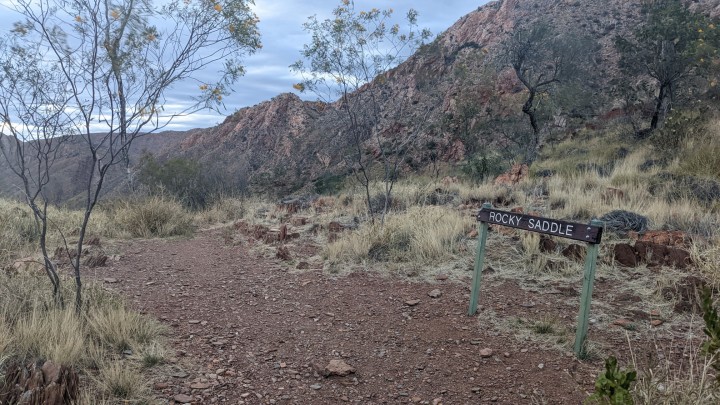 It was only 6:30am, and the sun still hadn’t come up yet. And with all the wind, it was chilly at the saddle! After a quick descent down to a valley, I went right back uphill to another ridge. 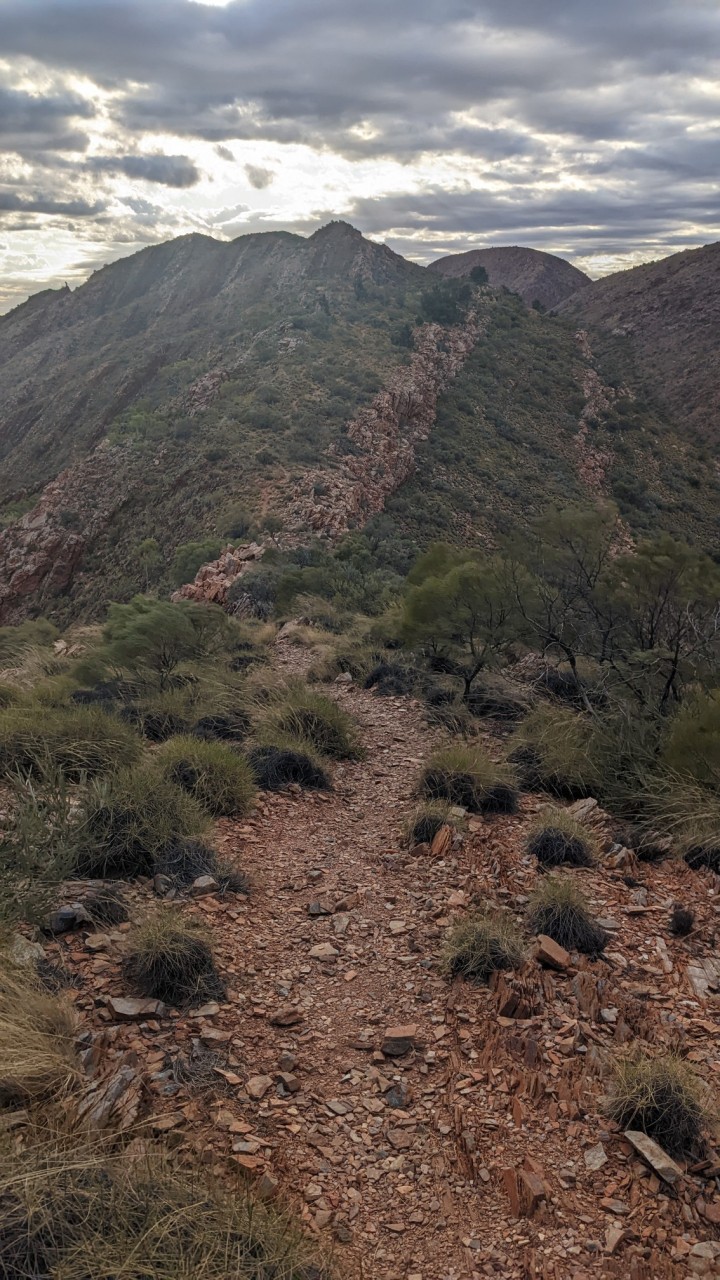 This climb was quite a bit longer, I think 300m/1000ft up. And it was somehow even windier. But it was amazing to walk along a narrow ridge with steep drops on either side! At the highest point on the ridge was a sign, everything on this trail is so well signed! 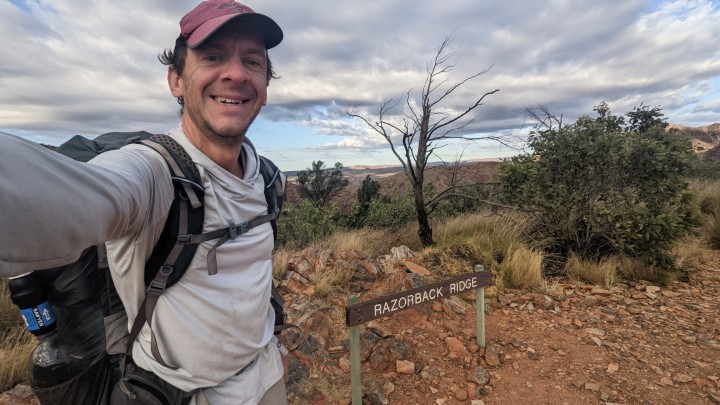 The ridge-walking continued for another few km. 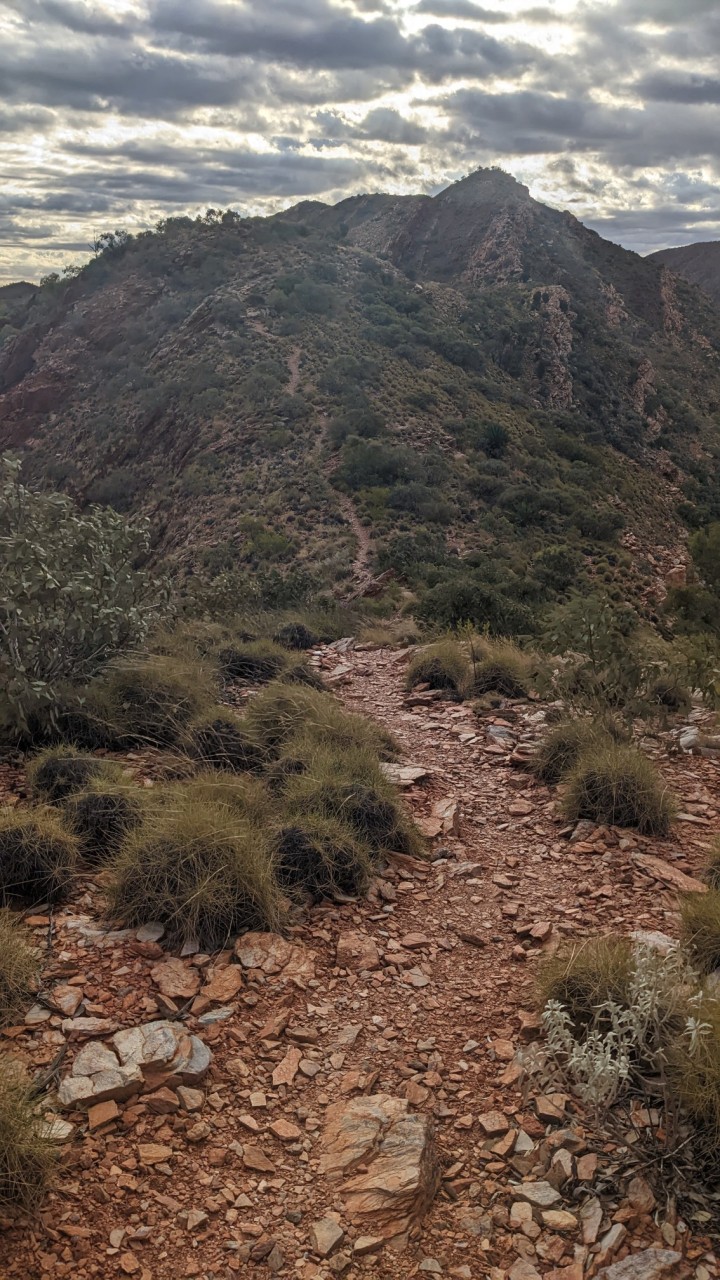 And then I saw something in the middle of the trail…a hat! 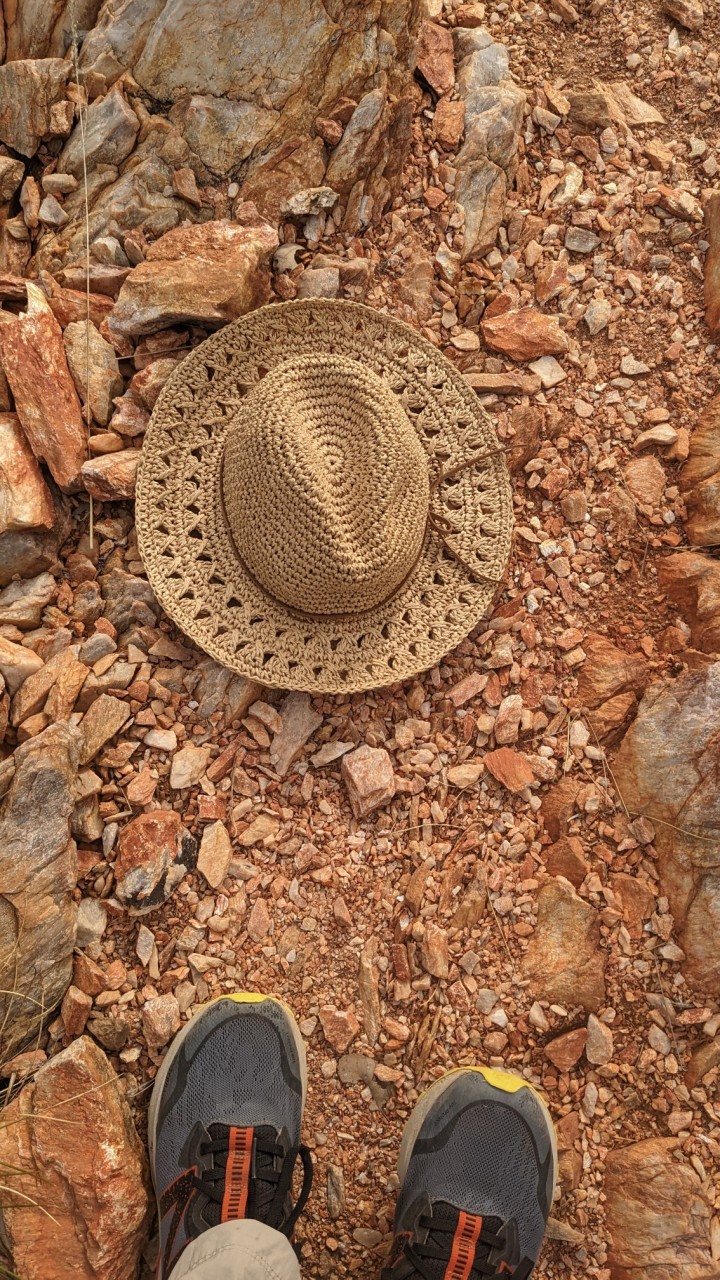 Some hiker ahead of me must’ve lost it yesterday (there was nobody hiking the opposite direction for days). I clipped it to my pack to bring to Standley Chasm campground, maybe someone will claim it. Eventually I descended off the ridge… 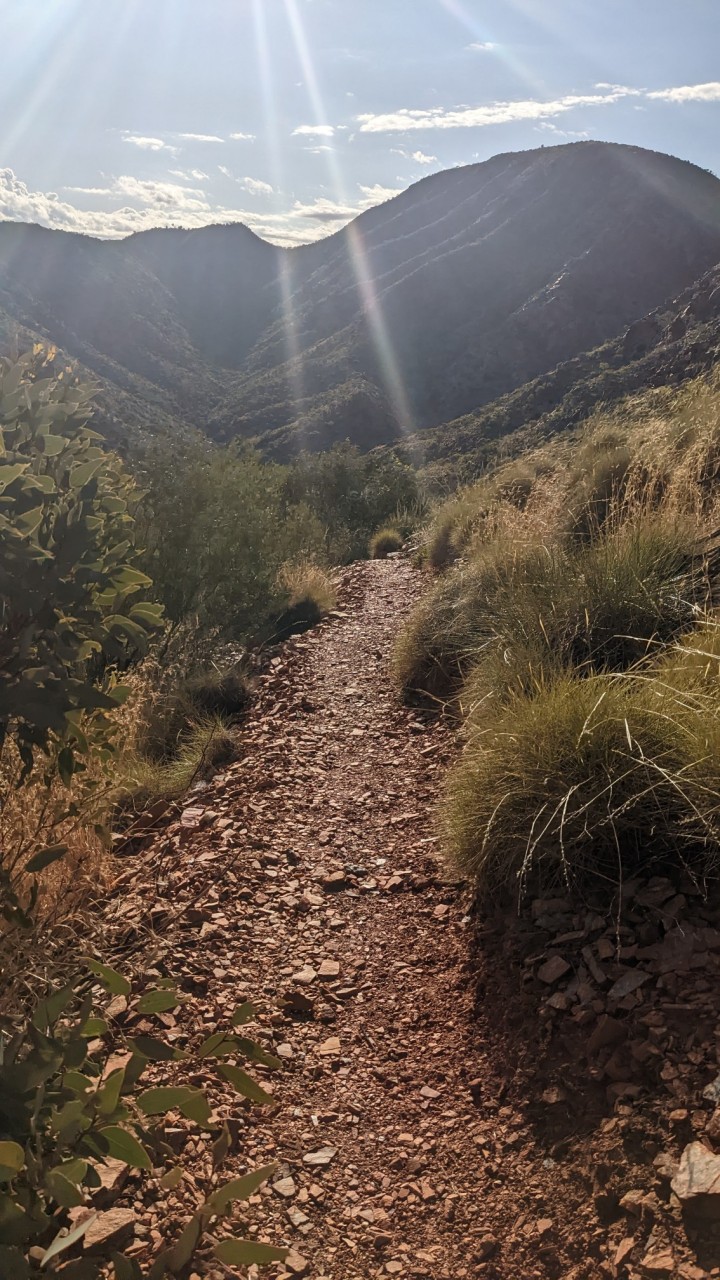 …and into Spencer Gorge! 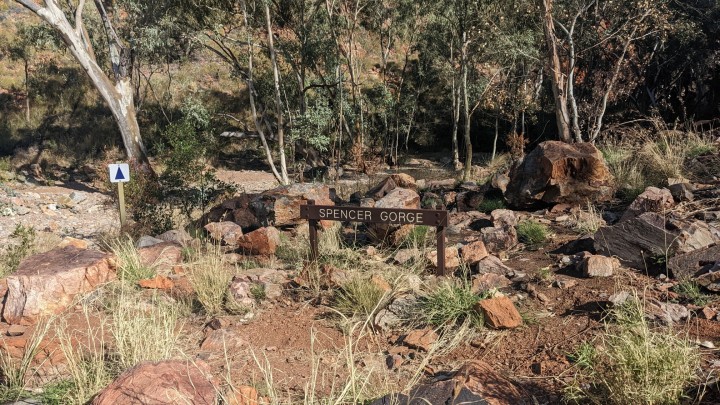 It’s a 2km section that travels thru a rocky, talus-y, deep gorge with lots of greenery. 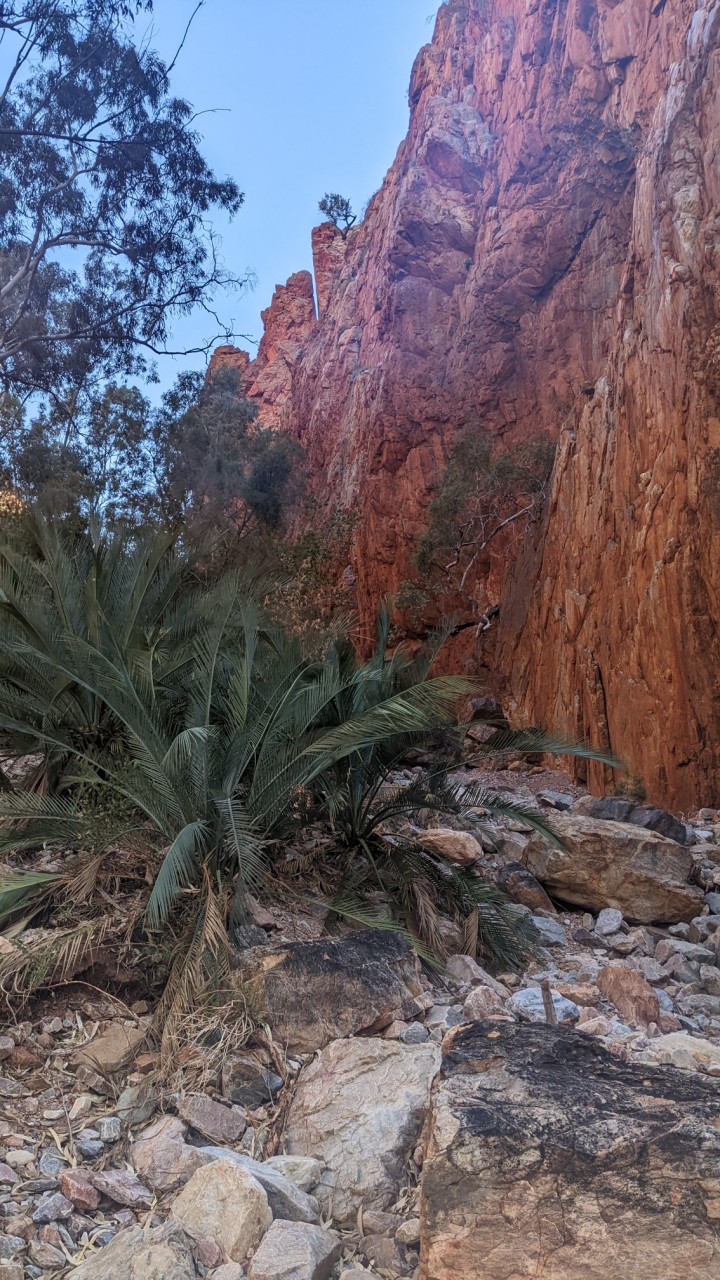 My ankles didn’t enjoy the rocky gorge, but I sure had fun with it, kinda feels like parkour! I had a nice break at Birthday Junction campsite, refilled my water, and even charged my phone a bit! 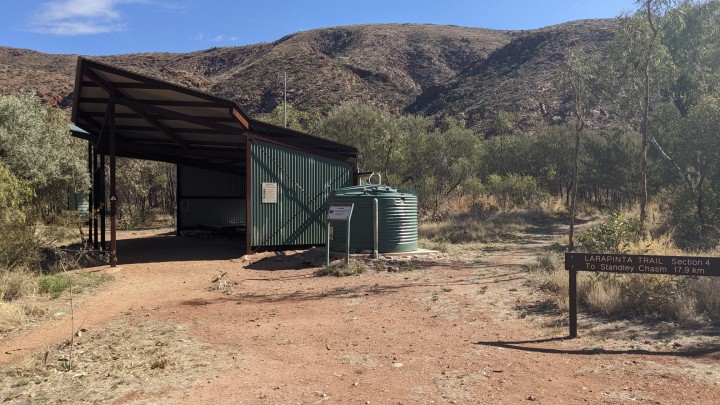 The next hour of hiking was amazing, traveling thru a wide sunny valley. 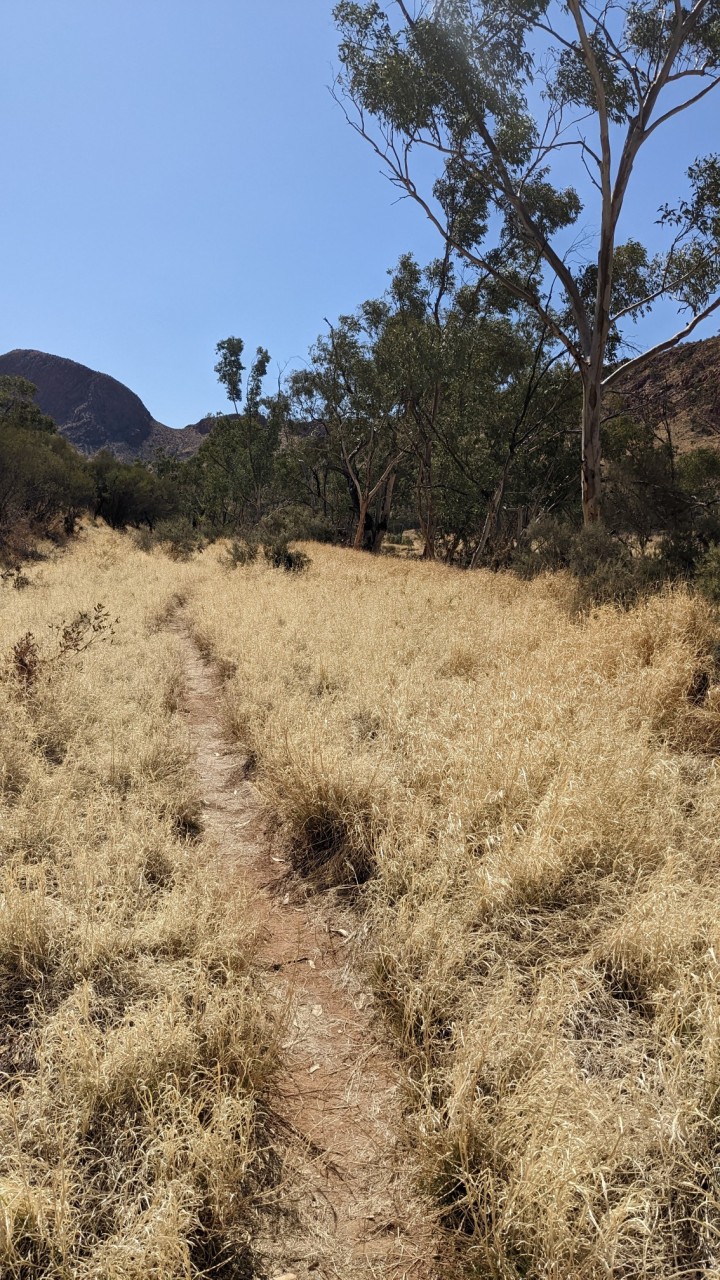 Eventually the valley ended, and I crossed a sandy wash to begin the next climb. 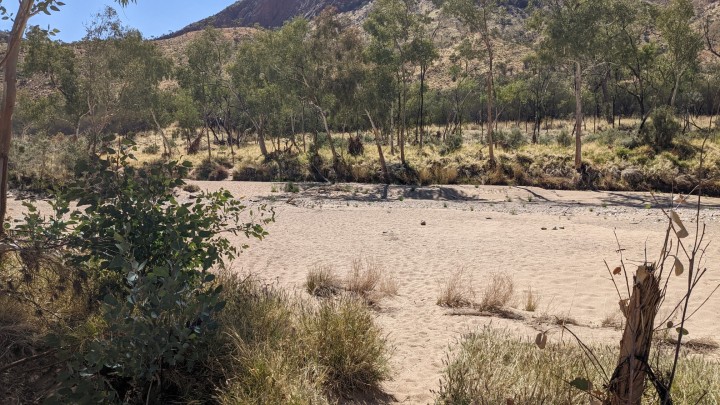 This climb was very long, I think it climbed 500m in 3km, and it became rather steep at the end. By 11:30am, I had reached the top! I was glad to finish my last big climb before the day became hot. 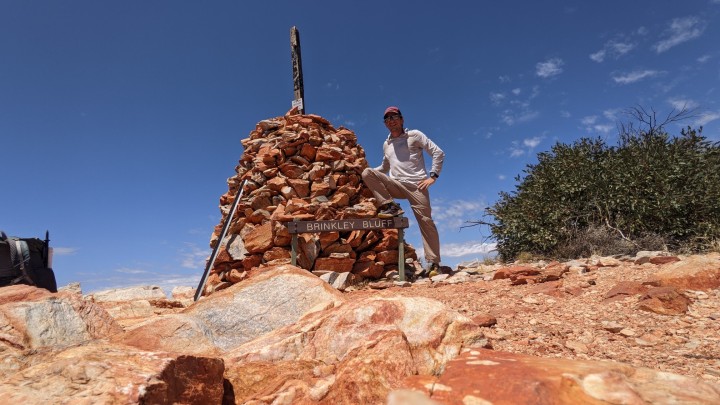 Many of the summits and ridges here have these funny signs. 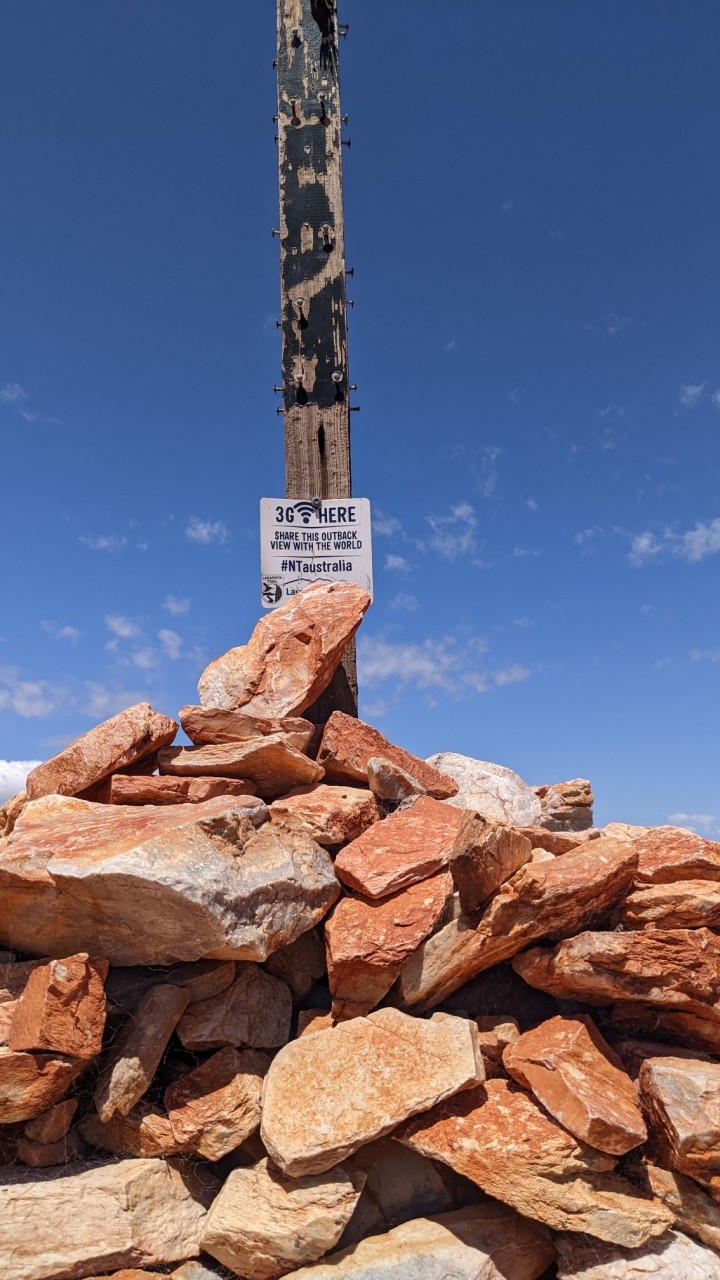 I spent 45 minutes there, enjoying lunch, the views, and 4G reception, haha. The next hour was another epic ridgewalk, I was hoping it would never end. 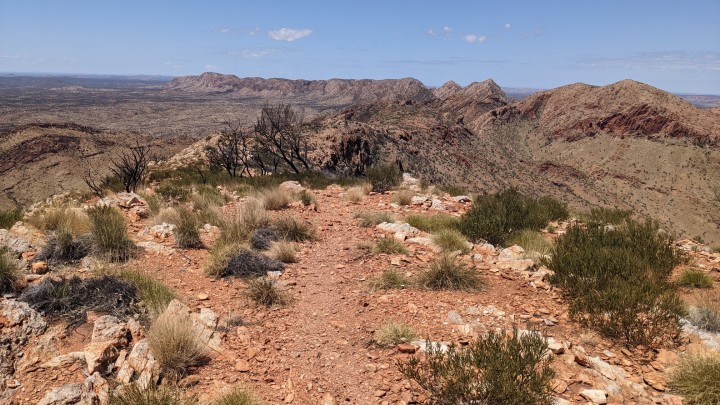 Occasionally I would be distracted from all the views by a pretty alpine wildflower. These things are hardy little plants. 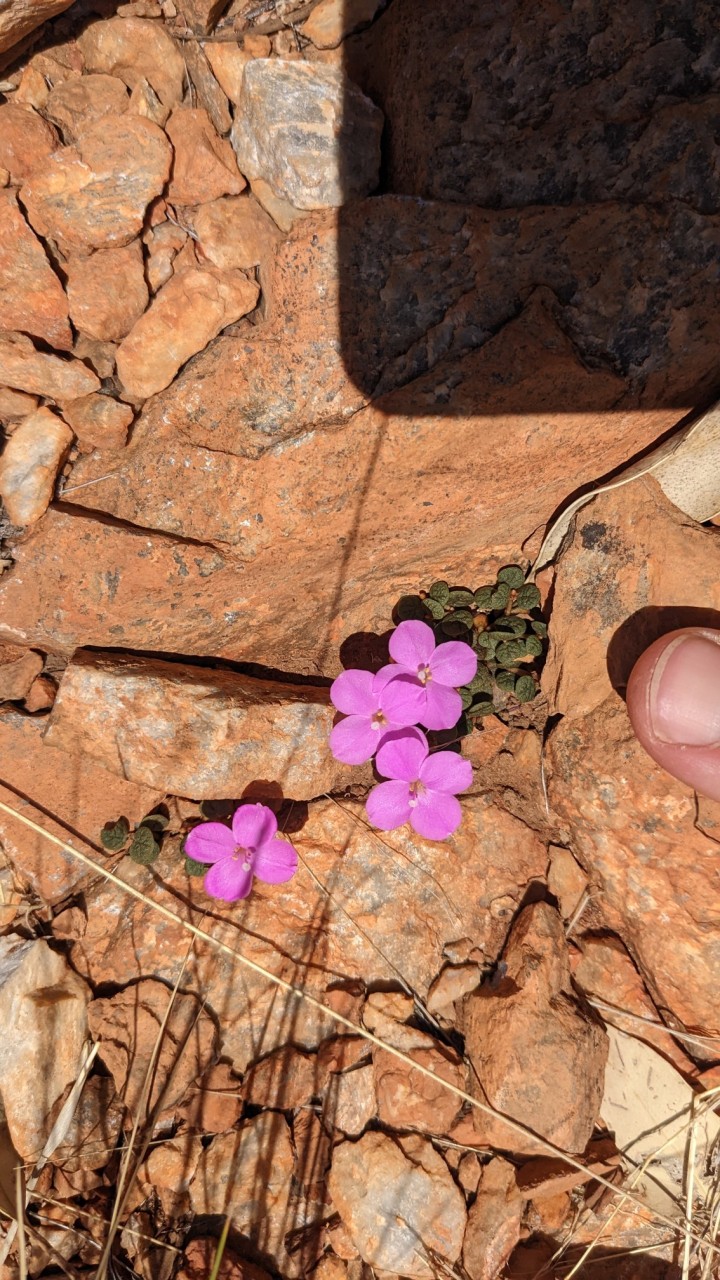 Eventually, the ridge-walking came to an end, and I had one last saddle to pass thru before my final descent to camp. 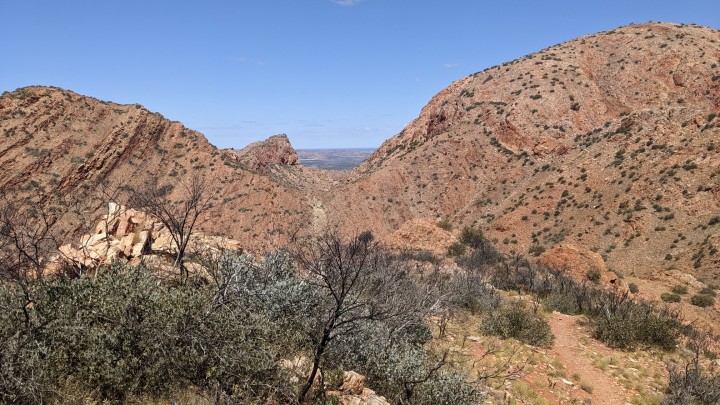 Once I had hiked over to the saddle, I saw they gave it a name, haha! 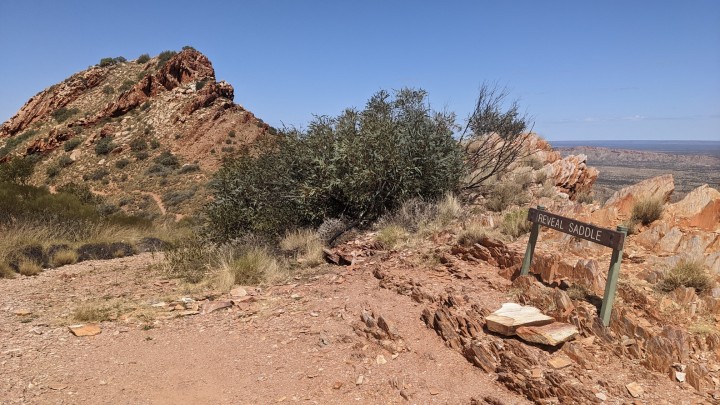 What does the saddle reveal? Maybe new parents have their gender reveal parties up here?! 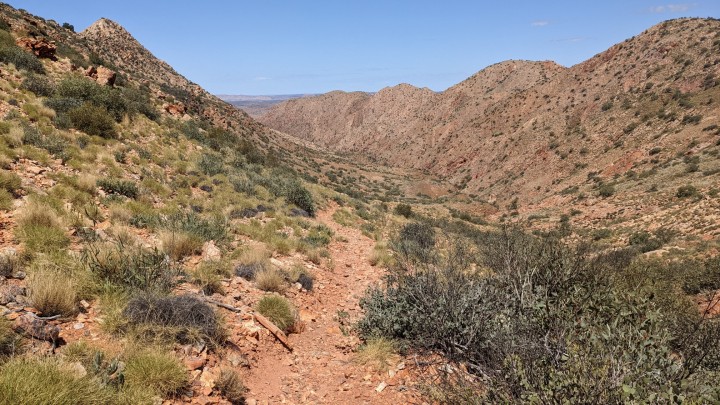 …all the way to the sealed (paved) road at Standley Chasm. Yes, even the remote Larapinta Trail has a short bit of road walking. 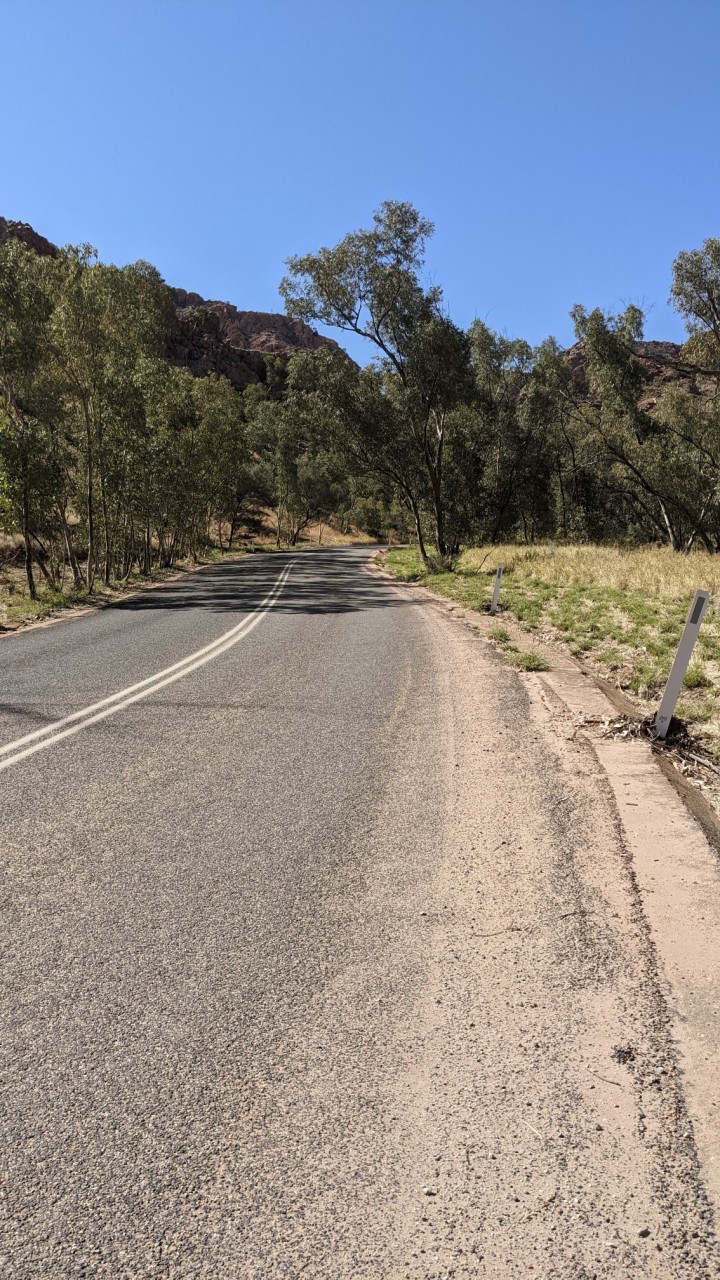 A few minutes later, I was at Standley Chasm. 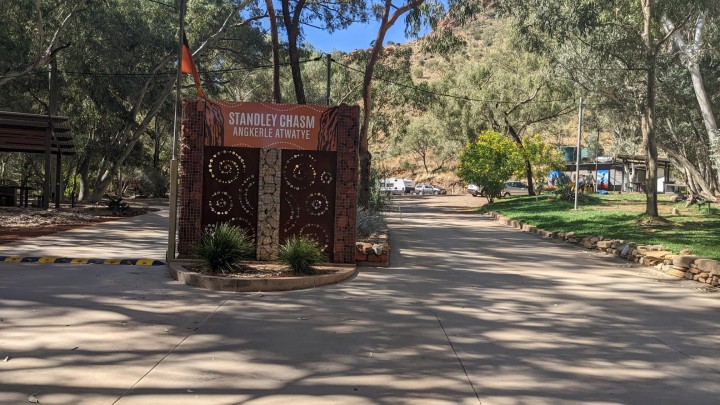 It was only 3:15pm, but I was hungry so I walked straight to the cafe and ordered an early dinner. 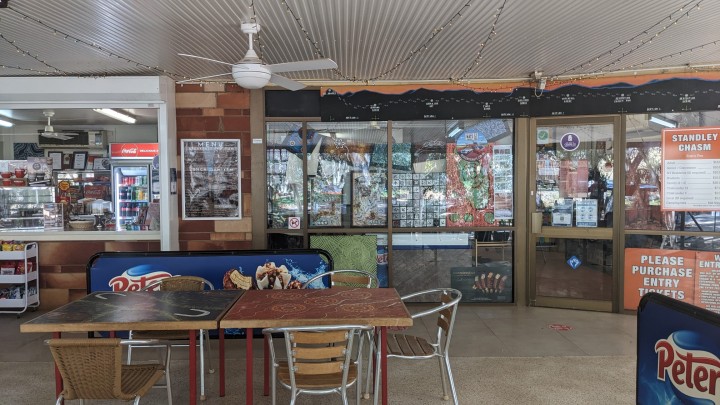 While I was waiting for my food to cook, I enjoyed an appetizer. 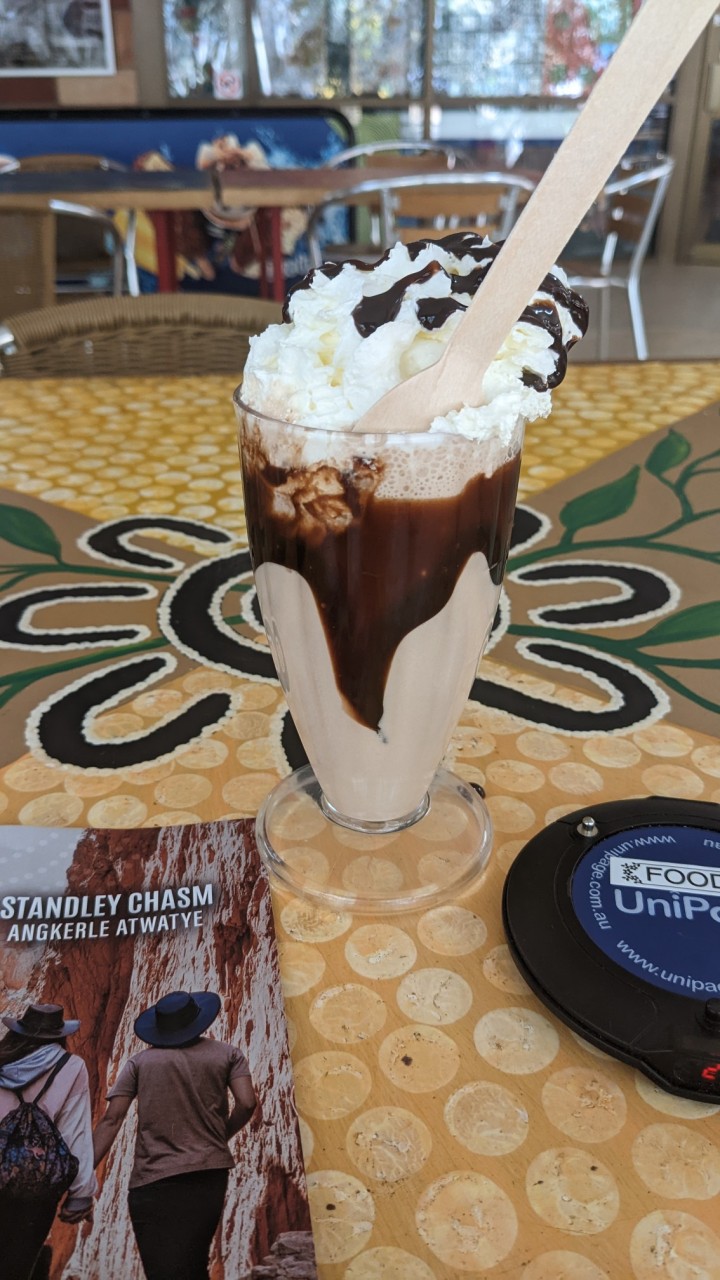 I love milkshakes, but when I received this one, I realized it didn’t contain any ice cream. I asked the staff if this was an oversight or on purpose…. sadly, on purpose. So it’s just a glass of frothy milk with some flavour syrup …which of course is NOT a milkshake. (New Zealand did this too). When will people learn?! When the food arrived, it was excellent. 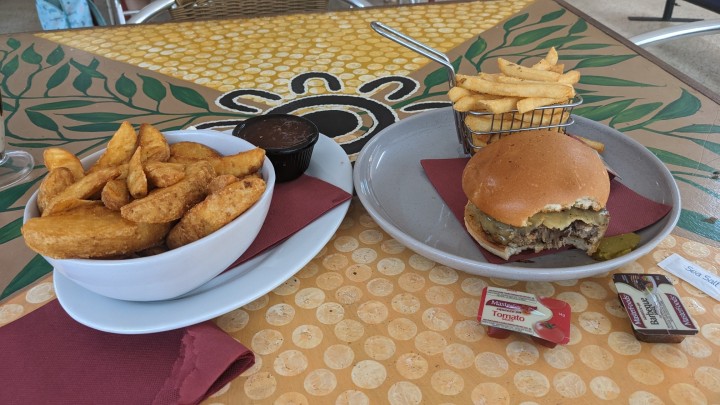 The potato wedges were seasoned with some addictive mixture of spices, and the red chile dipping sauce was heavenly. And I tried something new, a kangaroo burger! It was very lean and rich tasting, I rather enjoyed it.

I paid for my camping and entry fee ($18), as this is private land, not a public park. It’s run by the local indigenous tribe, and it was awesome to support their business. I walked over to the grassy area to setup my tent, and I met 4 other Larapinta walkers who are heading westbound (the opposite direction of me). They are all from Sydney and one is originally from Wellington. We spent much of the evening sitting around the picnic table discussing hiking stuff and various Australian attractions. I had a nice shower, and even did some laundry in the shower, and went to bed feeling all clean. It looks like my next shower will be in 3 more days, when I finish this trail…