The routine continued, awake at 5am, and skiing out at 6:50am. It was a calm, overcast day. The lack of wind and easy skiing made for an enjoyable hour of skiing across Long Lake.

Looking back to the North, one last time. We exited the lake at Hidden Cove lean-to, and re-joined the official NPT there. 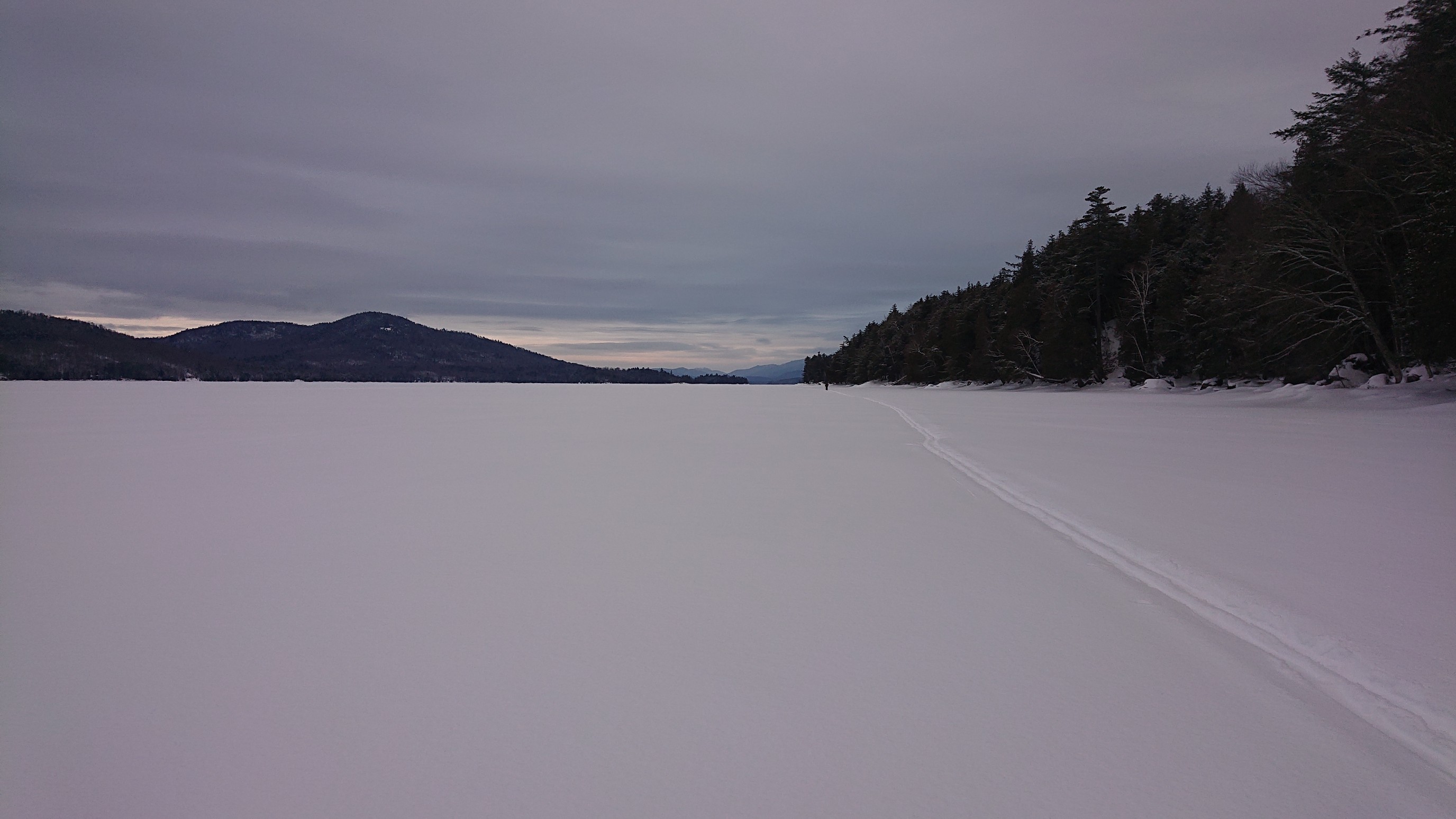 We took a quick snack break at the lean-to, and then continued on the NPT. The trail was broken out at this point, and it appeared it had been traveled by snowshoers and snowmobilers. There was one steep pitch where we experimented with our “skeets”, which is a mild ski crampon for climbing slopes.

We arrived at the Tarbell Road trailhead just before 10am, and I felt a nice sense of accomplishment. It was a difficult 36 miles of skiing, and the 2nd day was a bit of a mental lowpoint. But, we were all very excited that we hit this milestone, and with relatively no issues (blisters, overuse injuries, etc). 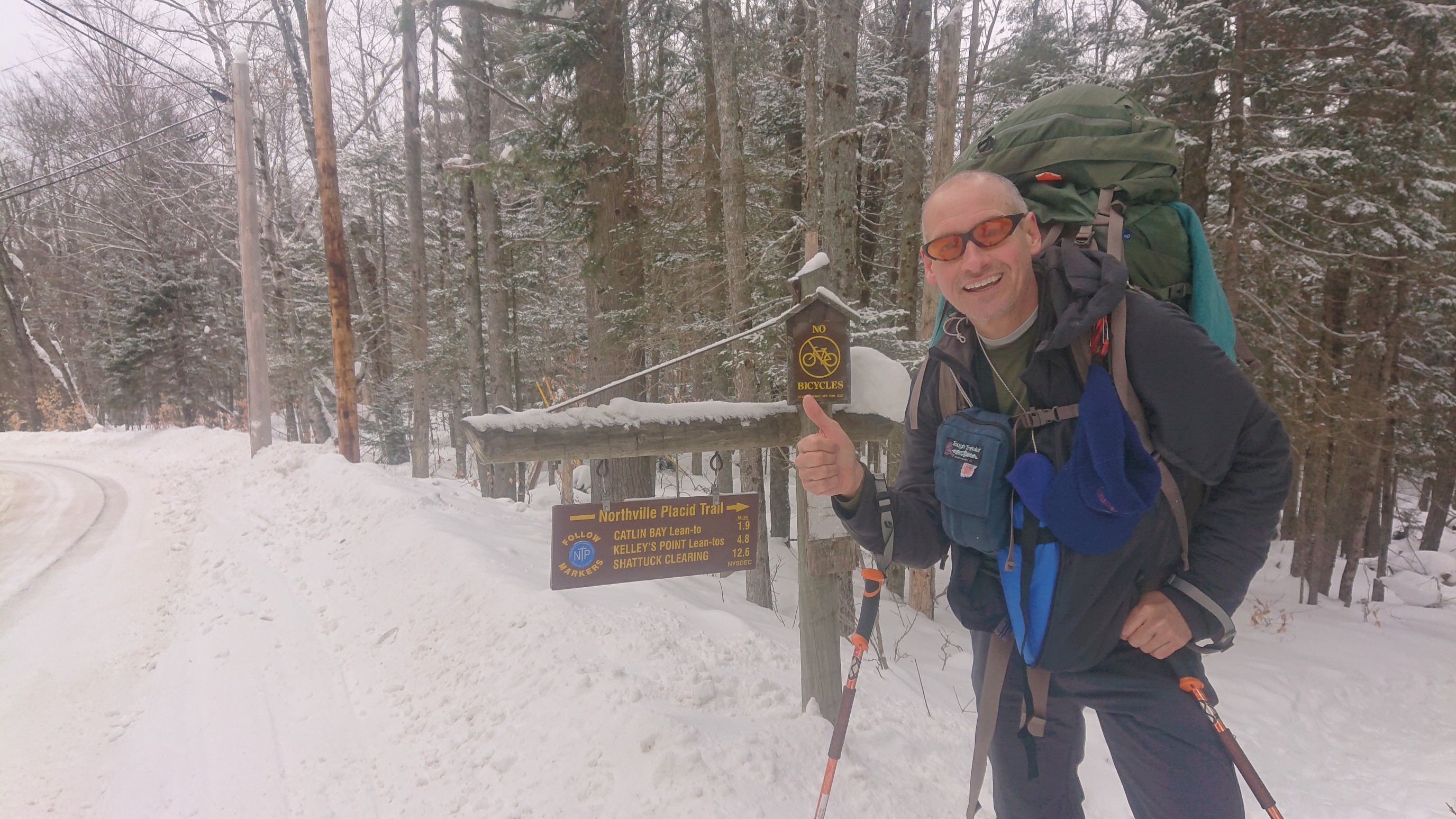 We skiied the Tarbell Road, as it hadn’t been plowed recently. After the 3/4 mile ski, we arrived at the other trailhead, where the NPT re-enters the forest. Barrett met us there and fed us McMuffins, beverages, and all sorts of tasty calories. Apparently I was too busy stuffing my face and talking to take any photos.

After an hour of eating, chatting, and story-telling, we put our skis back on. Mark signed us into the trail register, and we were back into the wilderness! This one is the Blue Mountain Wild Forest.

The first two miles were very easy skiing, as the trail was broken out, and it was wide and flat.

Though the occasional blowdown did provide some entertainment. Mark 0, tree 1. He was fine. 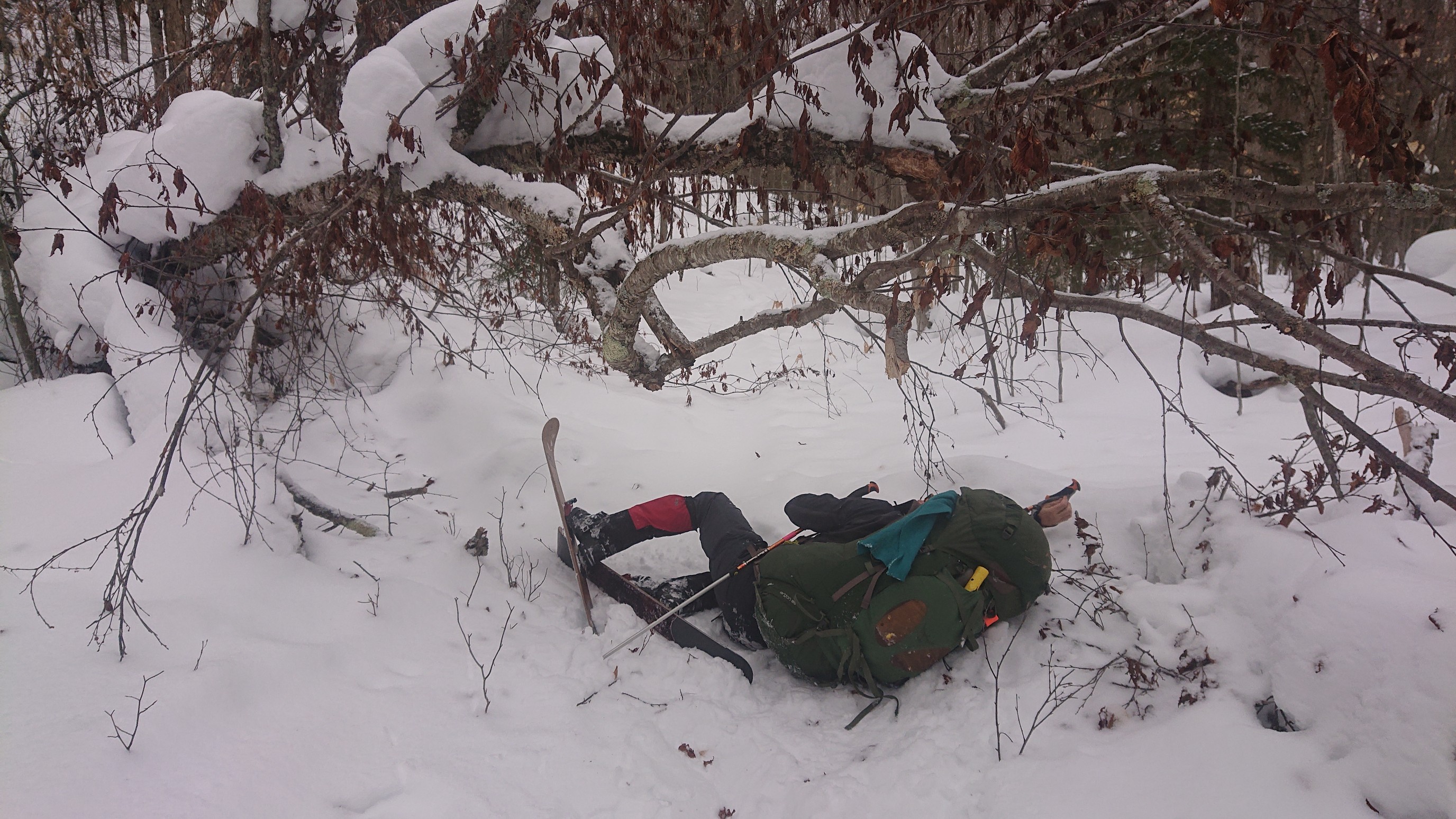 After two miles, the popular ski trail diverged from the NPT, and we had a narrower and rougher trail. For one of the blowdowns, Mark took a minute to saw and remove it. I carried a folding saw just for these instances, when it’s not easy to go either over OR under the fallen tree. 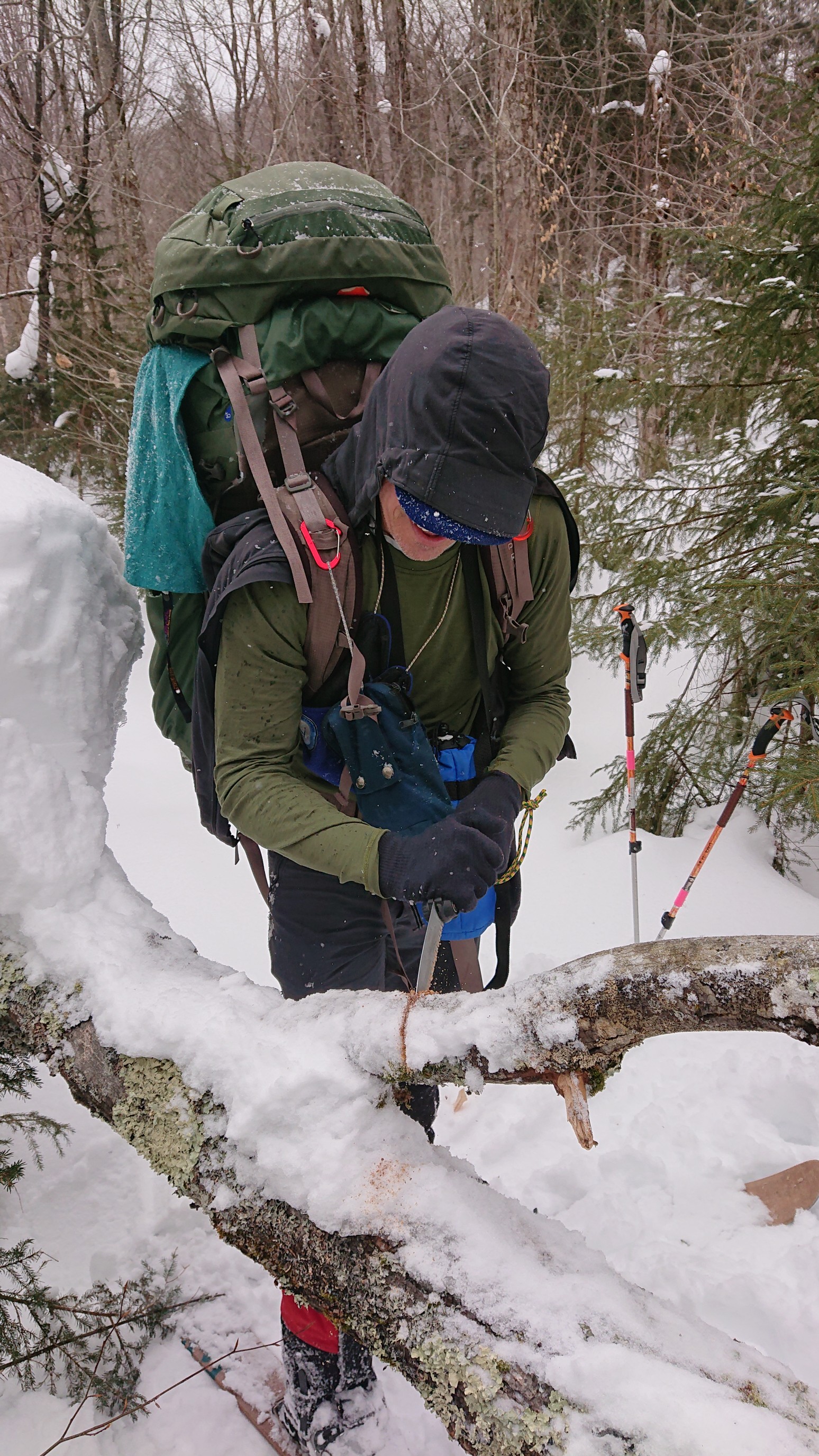 With the most egregious branches removed, we could now climb over the fallen tree. Jim again demonstrates his Adirondack blowdown skills. 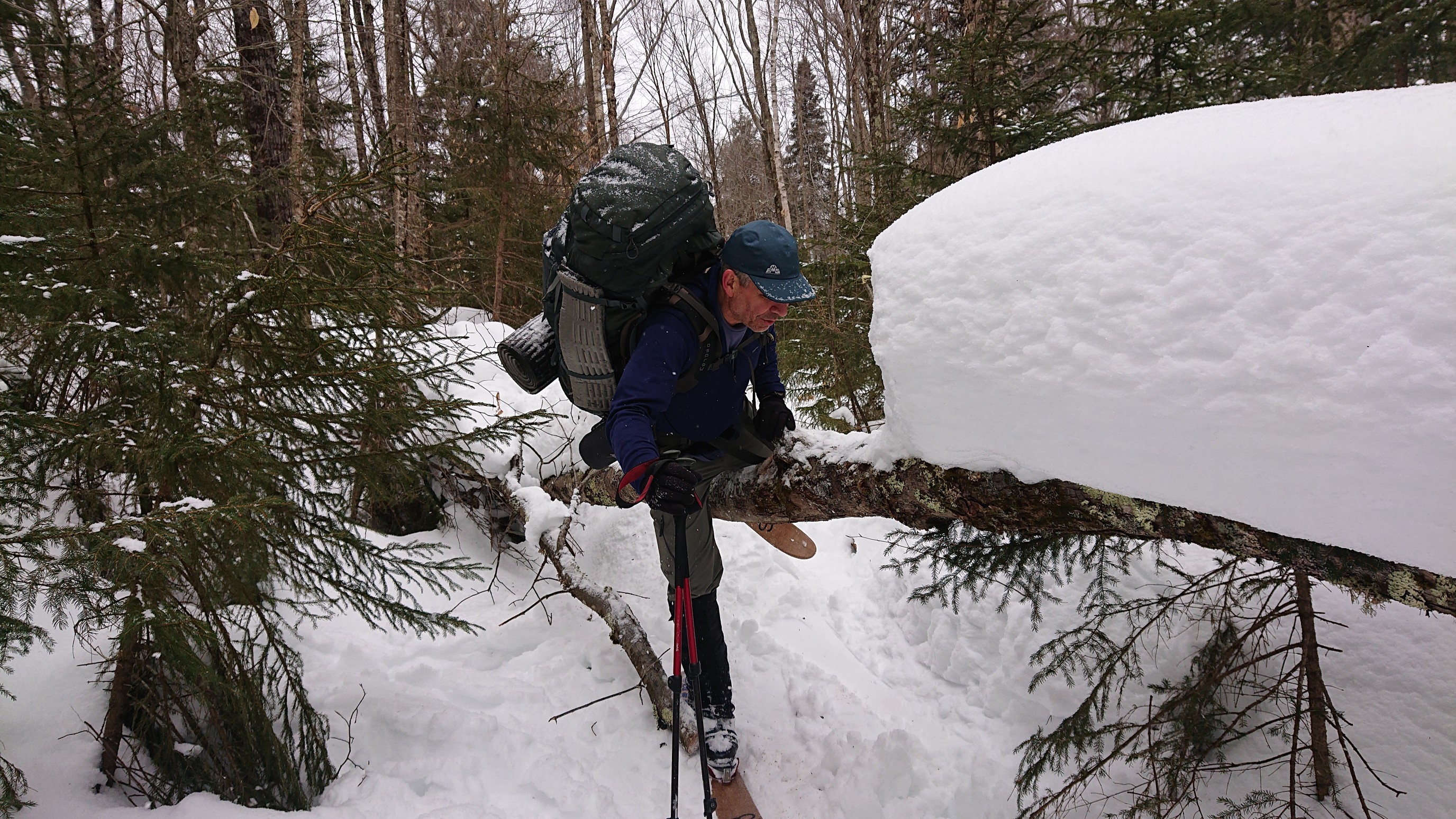 As we climbed higher up to Blue Ridge, the snow character changed, and the breakable crust disappeared. The trees also became much more snow-laden, and I was glad to have a lightly broken-out trail to follow.

It was exhausing climbing up the last half-mile of the steep Blue Ridge, as the trail doesn’t properly switchback, so we were often side-stepping up the steep fall line. Occasionally, I would intentionally leave the trail to make a couple switchbacks. It was really tough climbing, and we reached the top of the 3,010ft ridge just before 4pm. The descent was easier, although now it was on completely unbroken trail. After a short steep section of descent, we got to enjoy a nice ski down through some open forest. I was having so much fun that I forgot to take any photos. At 5pm, we decided to stop at a flat spot near the trail (and a stream) to camp for the night. It was snowing lightly, so we setup a tarp over our snow kitchen. It felt sooo good to sit down!

I ate most of my remaining food at dinner, but since we are skiing out to our resupply tomorrow, I wasn’t concerned. It felt really good to have the steep Blue Ridge behind us, as that had been a frequent topic of conversation the last few days. It is the highest point on the entire NPT, and the steepest climb on the elevation profile. We are camped at 2600ft elevation, so theoretically “it’s all downhill from here”, but that never turns out to be true. 🙂

We have about 9 miles tomorrow to get to the road, where Barrett will meet us again. This time, we will go into town (his house) and get showers and laundry and meals and all the wonderful things!