Achille is hiking separately with his dad today, so the rest of us (Kuba, Kacka, and me) hike out from the Holiday park together. We get a pretty late start at 8:30am, and after 30 minutes we leave the streets and enter the beach. It starts off as a nice beach walk, which is promising, because we have 22km on the beach today.

An hour later, some dark clouds start to move in, and the wind increases. It’s not cold, but with the wind, it feels much colder.

The precipitation starts, so we all stop to add waterproof layers to our backpacks and bodies. 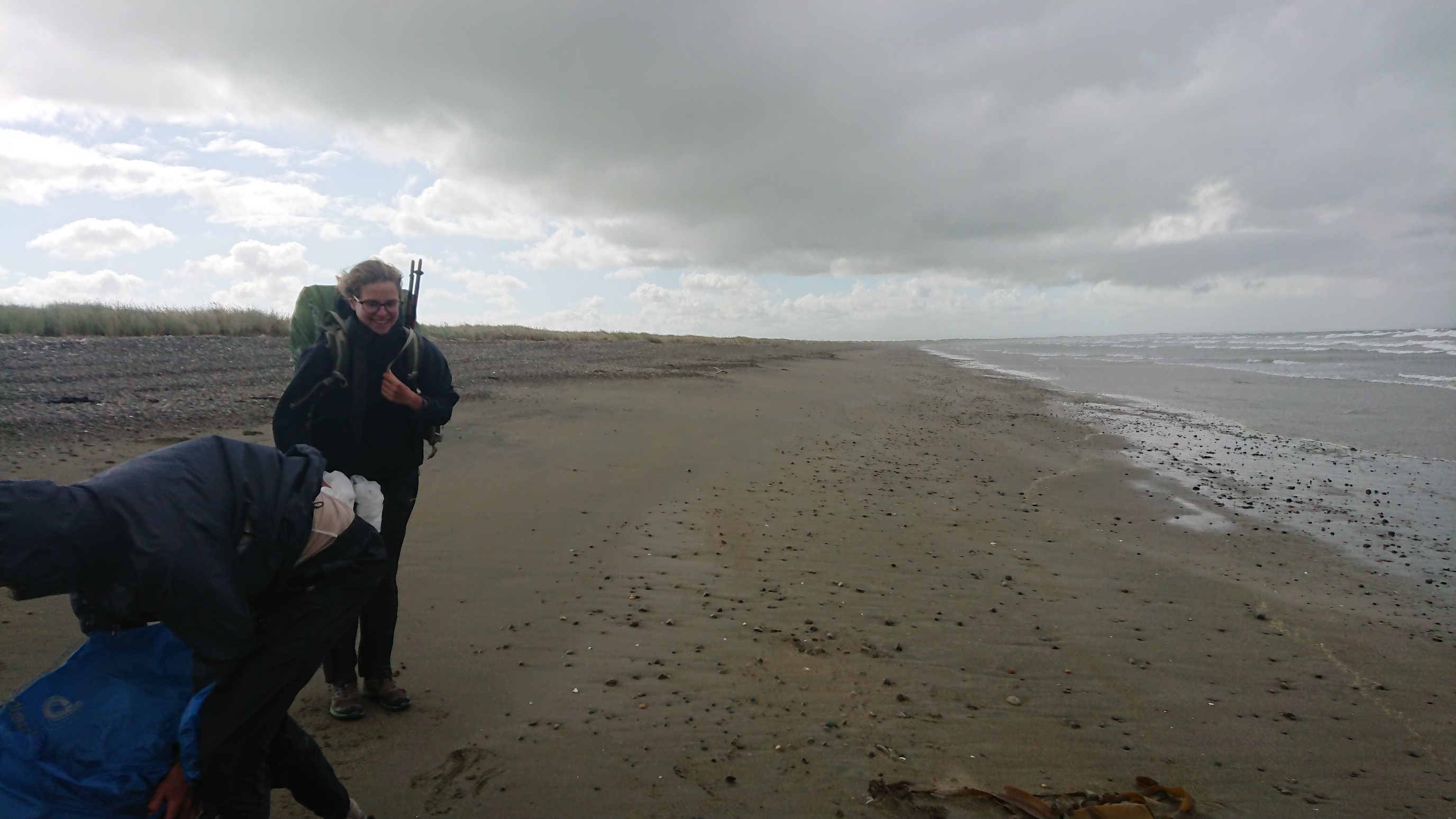 A few minutes later, the rain and hail starts to fall. It’s not much rain, but the wind is blowing it so hard that our legs are soaked pretty quickly. And the force of the rain/hail kinda hurts! 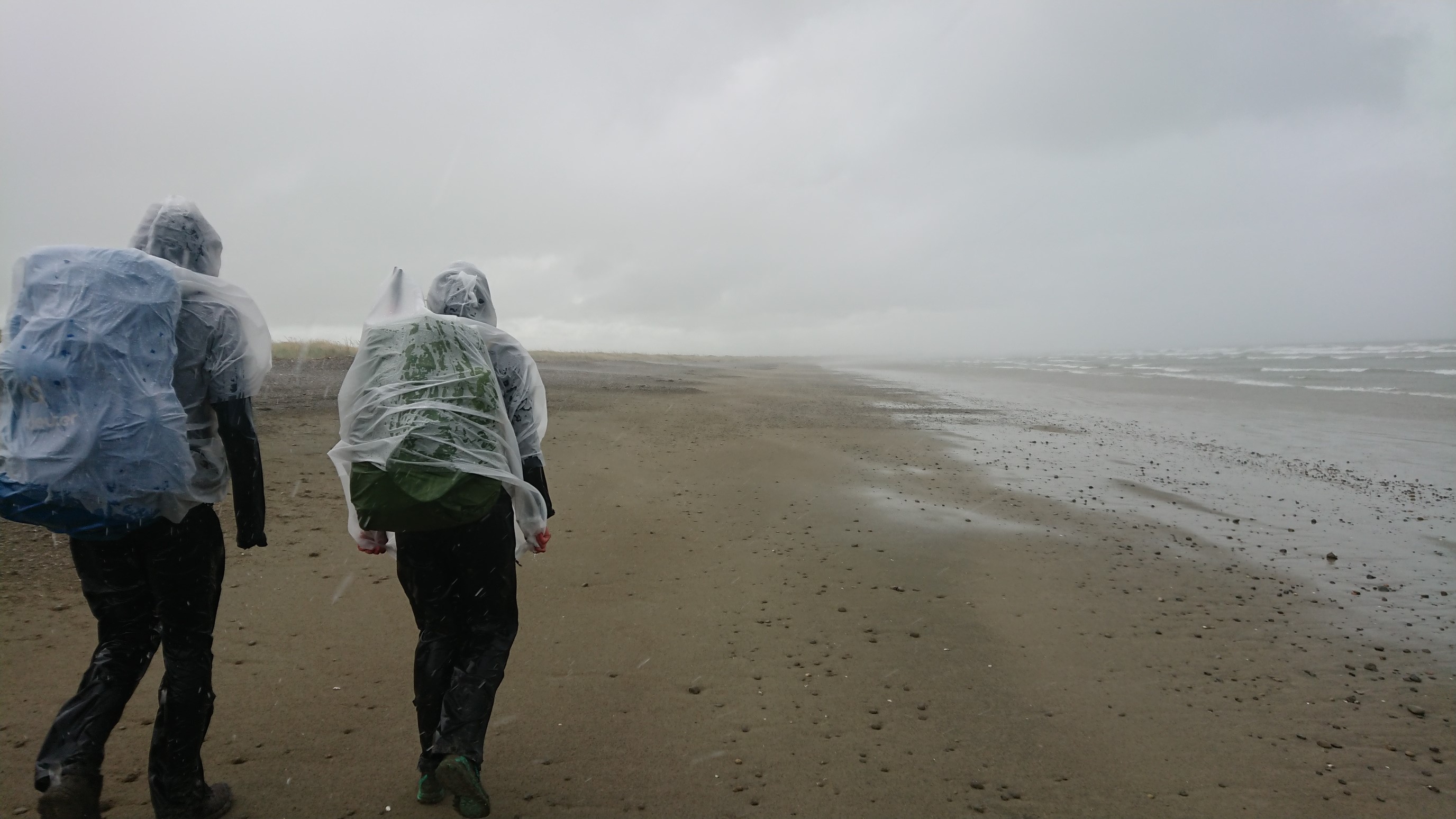 An hour later, the rain stops, and the sun even tries to come out. But it’s still very windy, which the patterns in the blowing sand show: 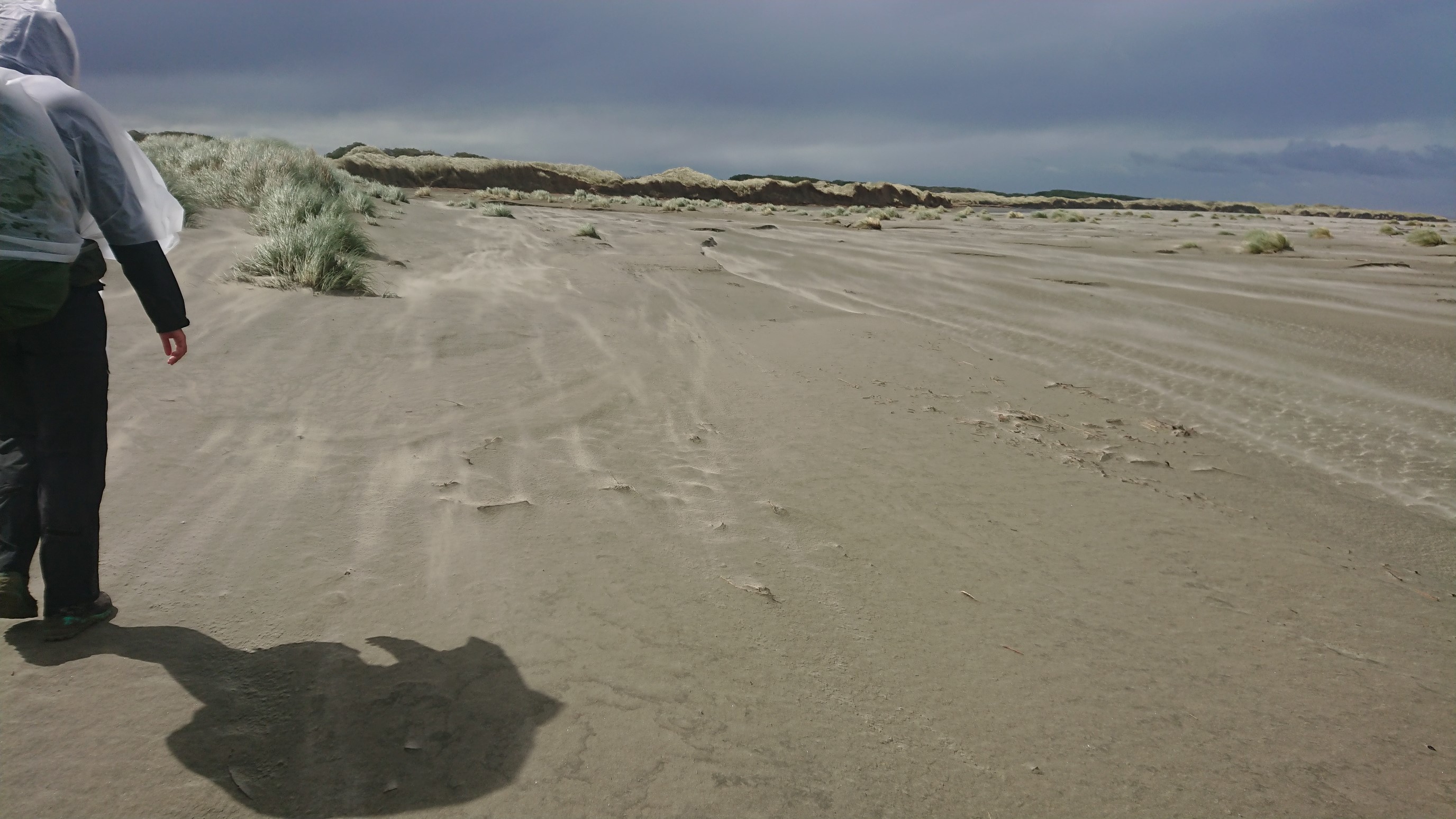 We are very cold and don’t want to stop walking, but eventually hunger takes over, and we take advantage of a sheltered spot in some tall beach grasses. The sun is out, so it feels slightly warmer too.

After 22km, we finally leave the cold, windy Oreti Beach. Our map shows a restaurant up ahead, about 2km down the paved road. We walk quickly with excitement (and to stay warm), and stop for a 2nd lunch at the Cabbage Tree Restaurant. It’s pretty fancy and expensive, but they let us in and we order some hot drinks and food. After an hour of eating and warming up, we leave and roadwalk the final 6km to Invercargill. We walk to the Tuatara Backpackers Hostel, which is the closest lodging to the trail. We book bunks for two nights, since we will walk to Bluff (the finish!) tomorrow, and then hitchhike back here for the 2nd night. The rest of the evening is a blur, I think I walked over to Pak’n’Save, a warehouse-style grocery chain. After a dinner out, I’m back at the hostel at 9pm and asleep at 10pm.

We hike out just after 8am, and weave our way thru downtown Invercargill for 2km.  We rejoin the TA on the west side of town, near the Waihopai River. The first 3km of the route are beautiful, on the Invercargill estuary Walkway, which is an elevated walkway thru tidal marshes.

The trail stays near the water, but of course ventures thru cow pastures. It’s not a day on the TA without cows!

We hike thru farmland for 8km, and then take a quick break just before we re-join the road. The first 11km of today were on hike/bike paths, but the final 23km are a roadwalk, mostly on SH1. We keep ourselves entertained by the various local wildlife though!

The entrance to the town of Bluff is marked by the characteristic huge letters. Some nice tourists took our photo, but didn’t have very good accuracy, ha! 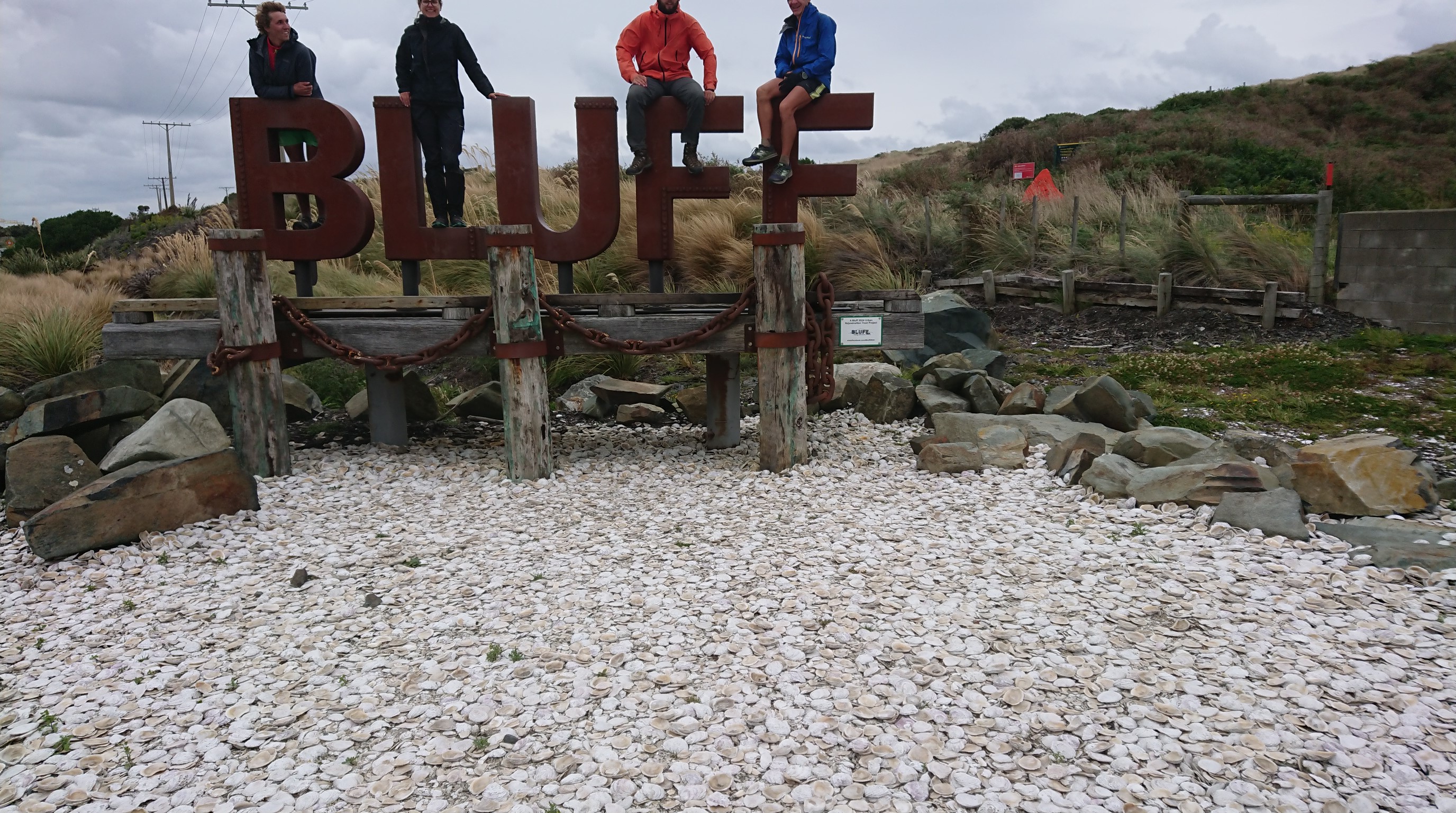 Roadwalkin’.  Bluff is the southernmost town on the South Island. 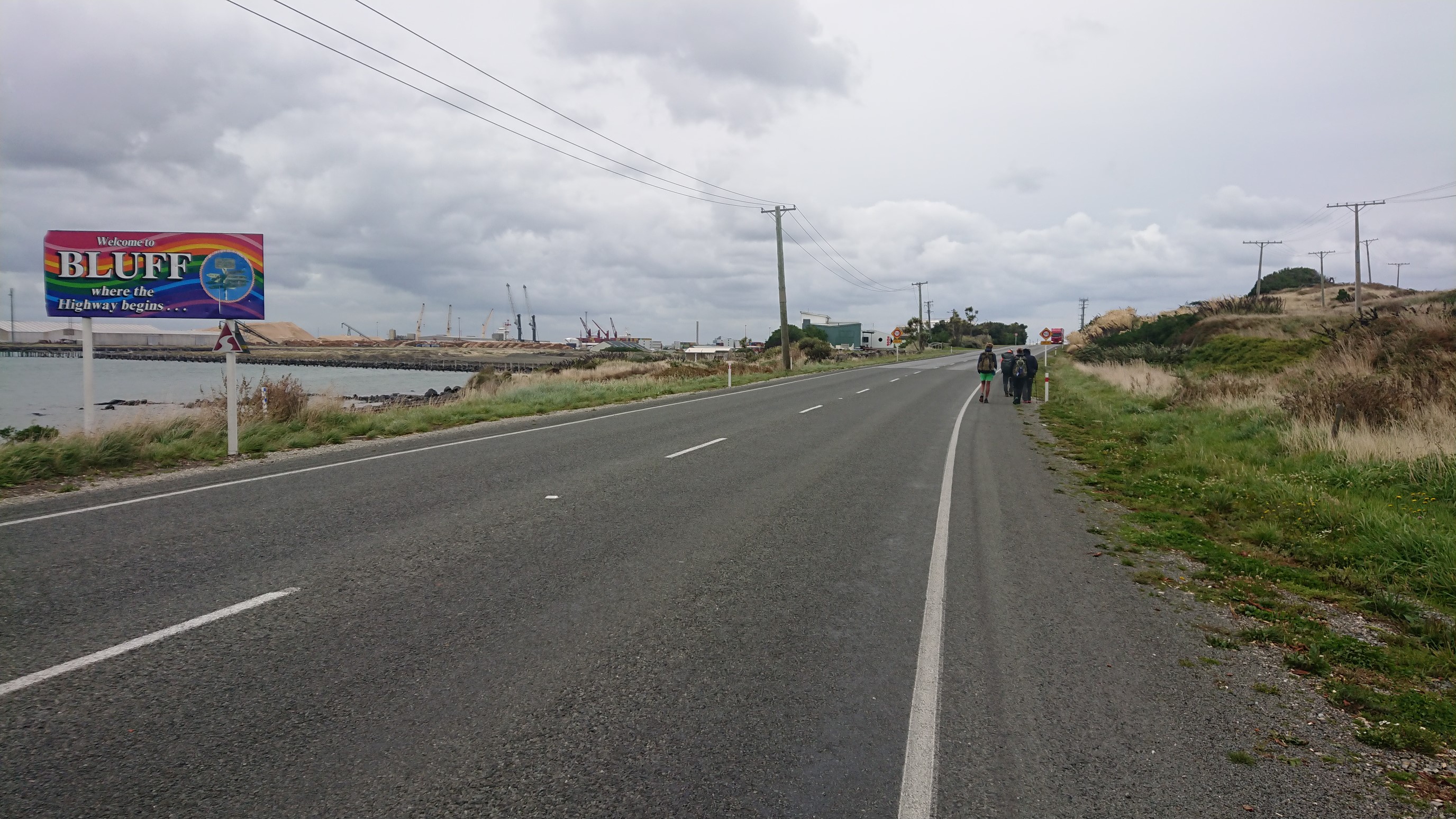 There is a cafe/cinema in town where all TA hikers stop to sign a giant map of the trail. It was a quirky little cafe, museum, and cinema all in one (now called “Oyster Allsorts”). There was a short film about the “Aurora Australis”, (the Southern lights) but we didn’t stay to watch it. Achille signing his name on the wall:

It ain’t easy being cheezy…

We hiked out of the cafe, and 20 minutes later arrived at Stirling Point, the southern terminus of the TA. It has one of those neat directional signs to some global major cities.

I barely had the arm strength to make this pose!

Then we staged a bunch of ridiculous photos too.  Almost made it!

Kacka and Kuba posing with our celebratory watermelon and champagne. Yes, the watermelons are tiny in NZ (and very expensive). 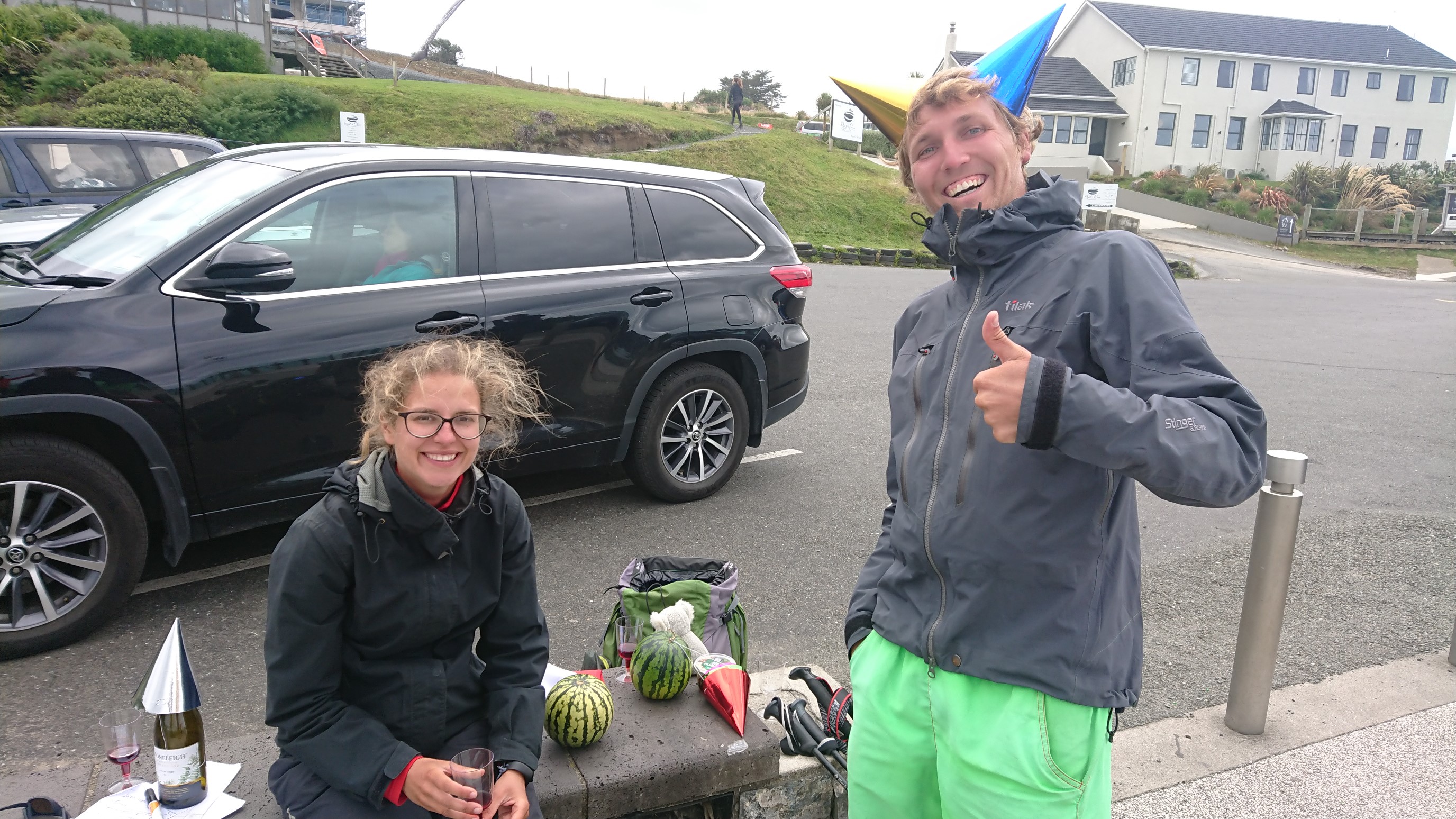 We went in to the nearby Lands’ End B&B, where they give out finisher medals to TA hikers, so cool! We ordered a drink and sat outside, since we probably didn’t smell great. It was getting later in the day, so we walked back down the road to hitchhike to Invercargill. Since it’s a dead-end road, there was little traffic, but eventually a guy in a minivan picked us up. We arrived back in Invercargill at 6pm and had dinner with Achille and his father.  We discussed some of the more memorable days on the trail, and had a good time reminiscing. It feels so weird to be done with this trail!  But I’m not done hiking in NZ yet, I have another week in the country and a few small side-trips planned!