The last 36 hours have been a whirlwind of activity here in NZ. I landed Saturday afternoon (never saw Friday!), and had the experience of going thru NZ biosecurity. They ask all sorts of questions about plants, seeds, & food, and even check your hiking shoes and tent! I picked up a couple of 60-day Sim cards for my phone, I went with Vodaphone since I’m told that company will work better in the rural northlands. It’s an easy bus ride to downtown Auckland (public transit is great here), and I finished my errands, checked-in to my hostel, and promptly passed out.

Sunday was mostly a transit day, I rode a bus from Auckland to Kaitaia. 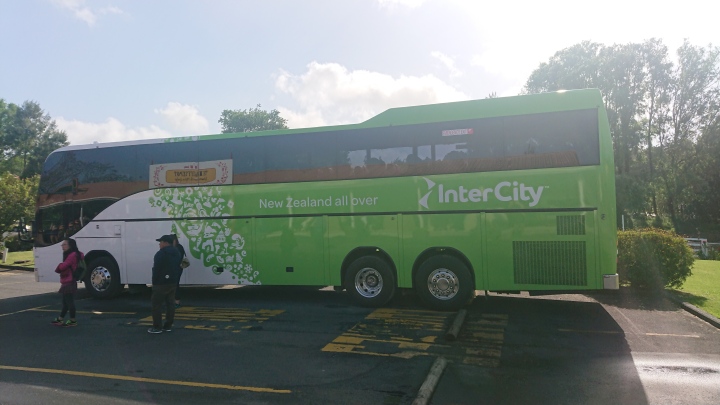 As the driver was loading the luggage on the bus, I saw some hiker packs (gossamer gear, osprey, ULA), so I kept my eye out for other hikers. Partway through the journey, we switched to a smaller bus, and I was seated next to a couple hikers! They were friendly women, doing their first long hike, traveling from the US also.

Once in Kaitaia, I did my food shopping and started hitching to Cape Reinga. The first two rides only took me 10km each, and the third offered to bring me to “Utea”, a camp for TA hikers. It was almost 5pm, so I accepted, and camped at a nice facility with showers, smoothies, and a full kitchen! 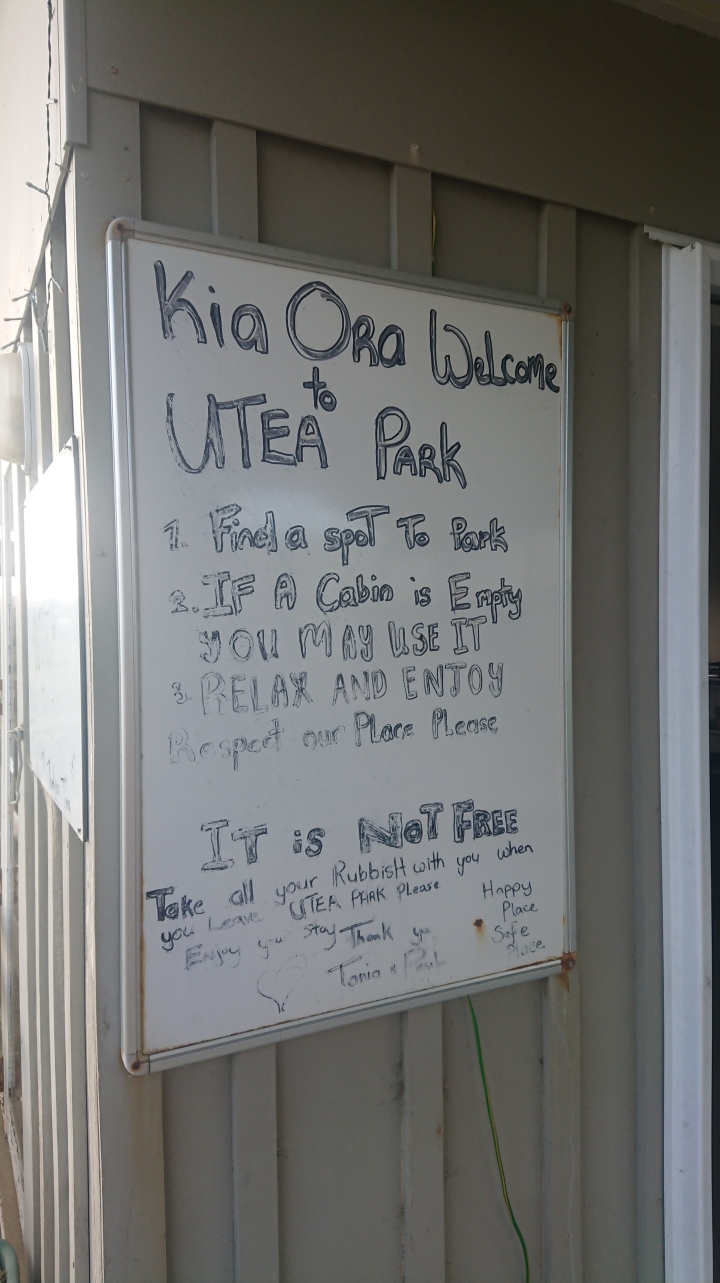 I woke up late, since I knew the ride to the Cape wasn’t leaving until 0930. Tania was a fun driver, pointing out local landmarks on the way. Then, almost at the end, we got stuck behind a herd of sheep on the road! 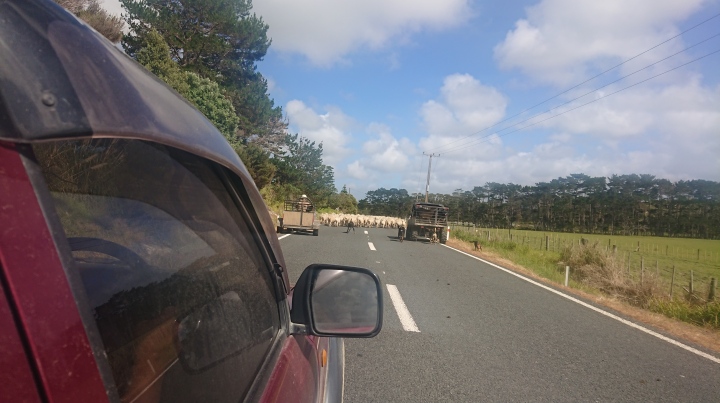 We arrived at Cape Reinga just before 11am, took our photos, and started walking south at 11am.

We passed many tourists the first 2-3km, then…no one. The trail drops down 50m to sea level, then re-climbs a bit to a sea bluff. Great weather and amazing scenery! 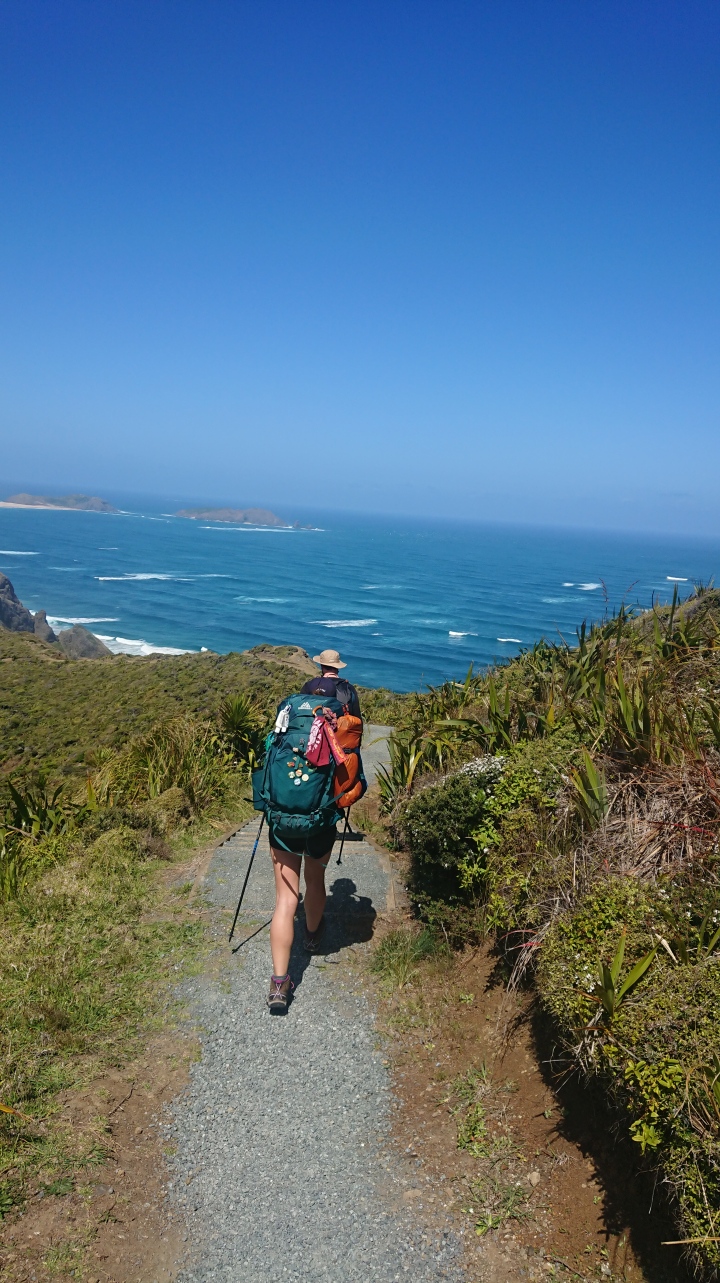 We stopped at Twilight camp at 2pm, so it was a very short day. But the next camp isn’t for another 28km, and it’s the first day, so it makes sense to stop. And it’s always fun to have a nice nap 🙂

I stayed awake until 8pm to watch the sunset over the Tasman Sea.

This was a fun day! An early start meant we could roll into the next camp in early afternoon. I love morning miles, they go by so much quicker than afternoon miles! 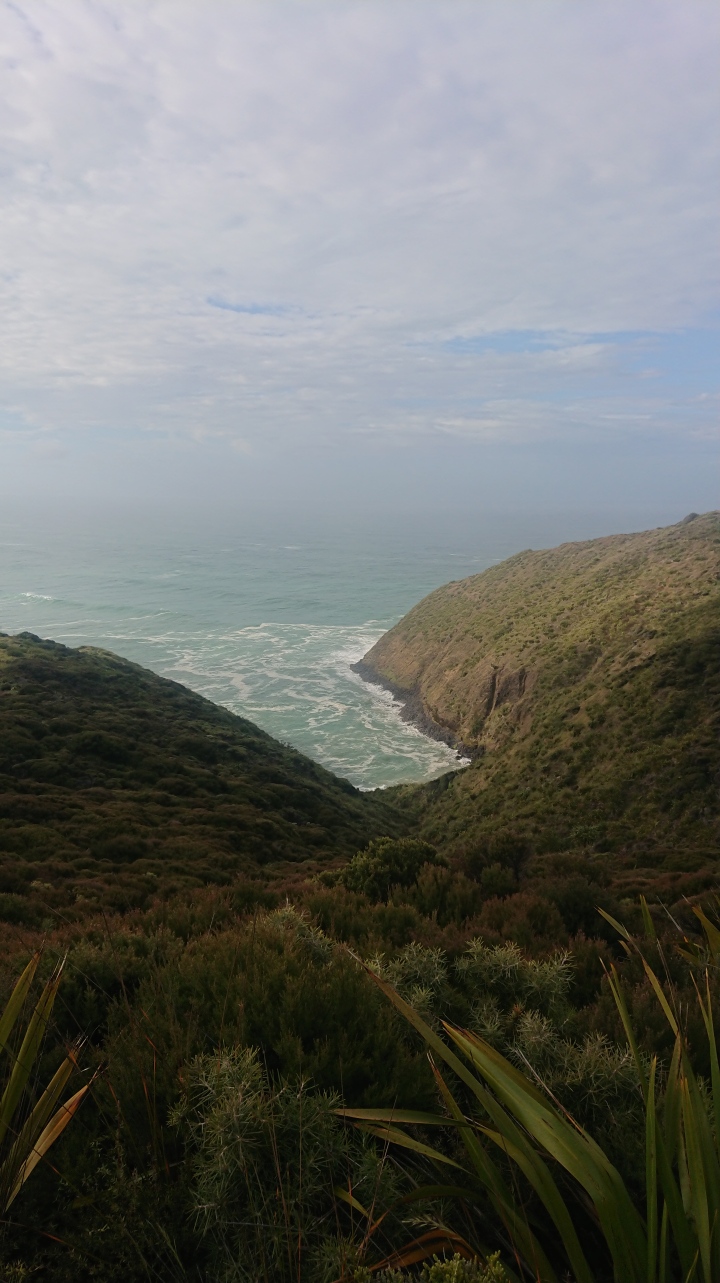 After an hour, the trail has many staircases, and it drops down to 90mile beach.

Amanda, Alon (Israel) and I stop for lunch on the beach. It’s not hot, but the sun is very intense.

Later that afternoon (“arvo” in kiwi), we walked by a dead….animal? Not sure what this was. 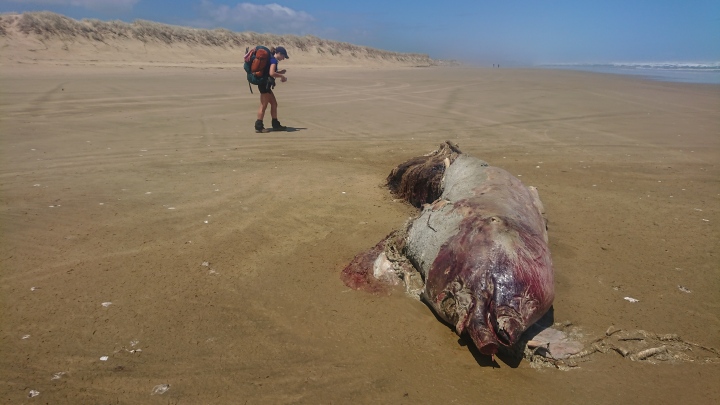 We get to camp early again at 3pm. The beach miles are very hard on the feet, and we are glad to be done. It’s like walking on concrete.

I had camped in a nice grove of pine trees, and woke up with a dry tent and feeling refreshed. I started out hiking alone, and covered 9k in the first two hours, before stopping for a break.

My usual dress in this sunny climate…

Hiking the beach is generally boring, but high tide makes it much more exciting… sometimes you get pinched between an incoming wave and the dunes! 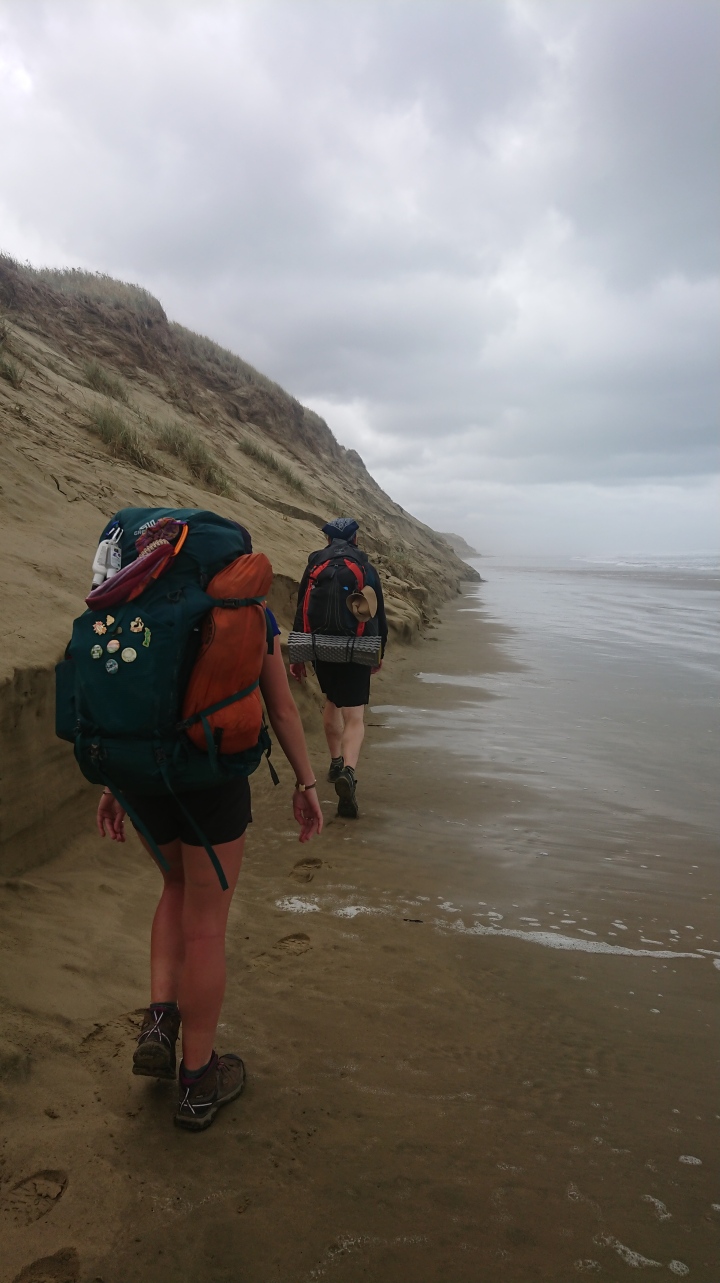 We arrive to Utea (Maori for “journey to heaven”?), where I had camped 3 nights prior, just before I started the hike. It was another long day of hiking on a flat beach, and all our feet are unhappy.

I feel bad for some of the other hikers, this is their first long hike, and they are carrying way too much weight. Plus, the trail starts off in a brutal way, forcing people to walk on injurious terrain with widely-spaced camp spots. There are 15 TA walkers staying here tonight, I hope they are all able to continue! 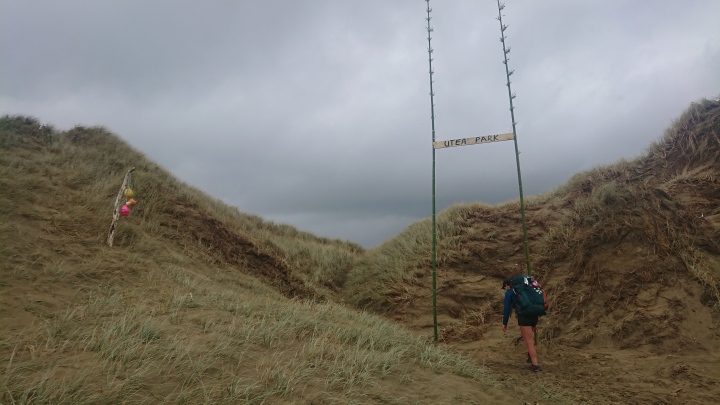 The last day on 90mile beach! It’s a long day, and our feet all hurt, but it’s motivating to be done! 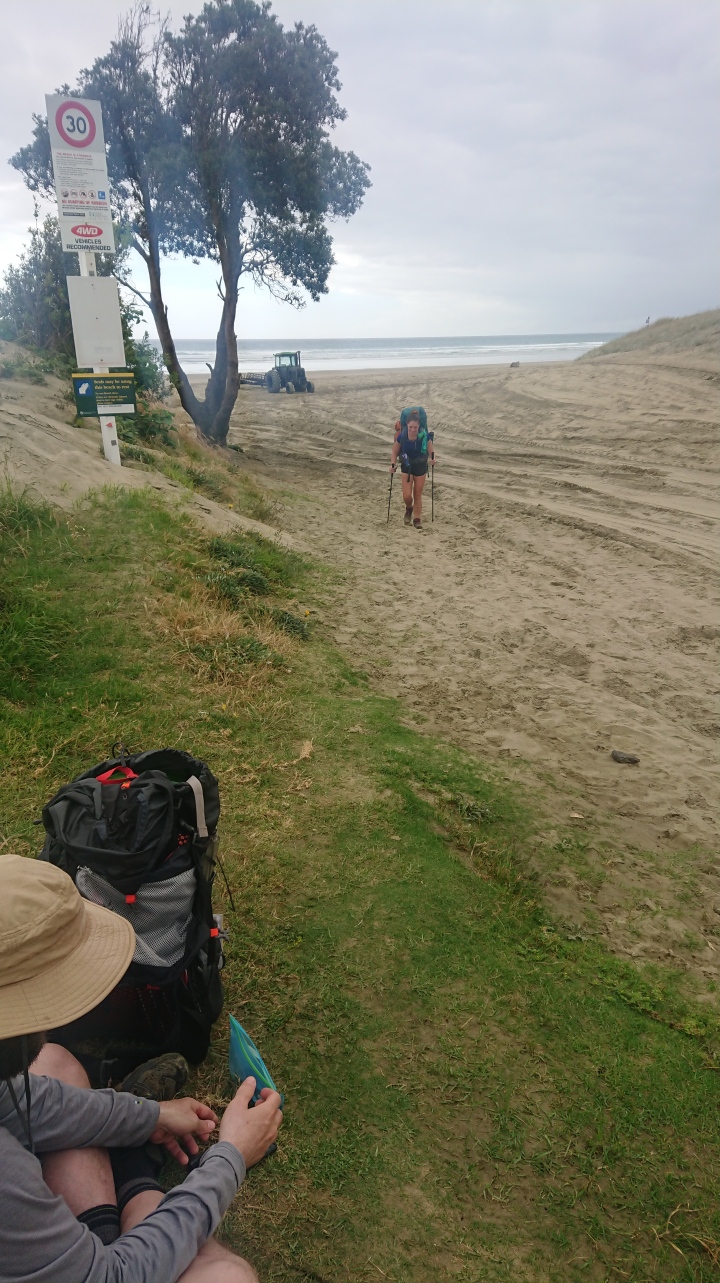 Then we headed to the YHA hostel to camp, shower, and get off our feet. A quick dose of vitamin I, and we are able to walk to the fish&chips stand. I order wayy too much food, but it will be just as good for breakfast!

I’m writing this in the hostel/campground lounge, which has free WiFi. (Note: most WiFi in NZ isn’t free, and this place limits you to 500MB).

Tomorrow, we walk to Kaitaia & into the Raetea forest!