I had devised an elaborate plan to make the logistics for this section work out. There were two issues to contend with – the Connecticut River, which requires a driving detour; and the long distance between trailheads. I parked my car on the West side of the river, so I could drive the 10 road-miles to the East side trailhead. To get to my starting point today, I biked the 11 miles from my car to the trailhead, and then hid the bike in the woods.  It was a nice hourlong ride along an old rail-trail. 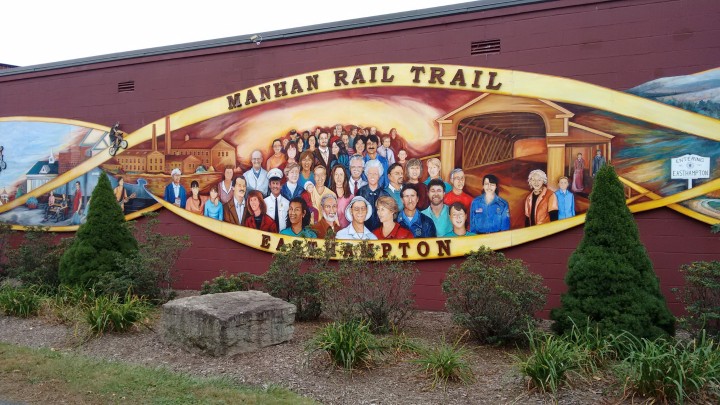 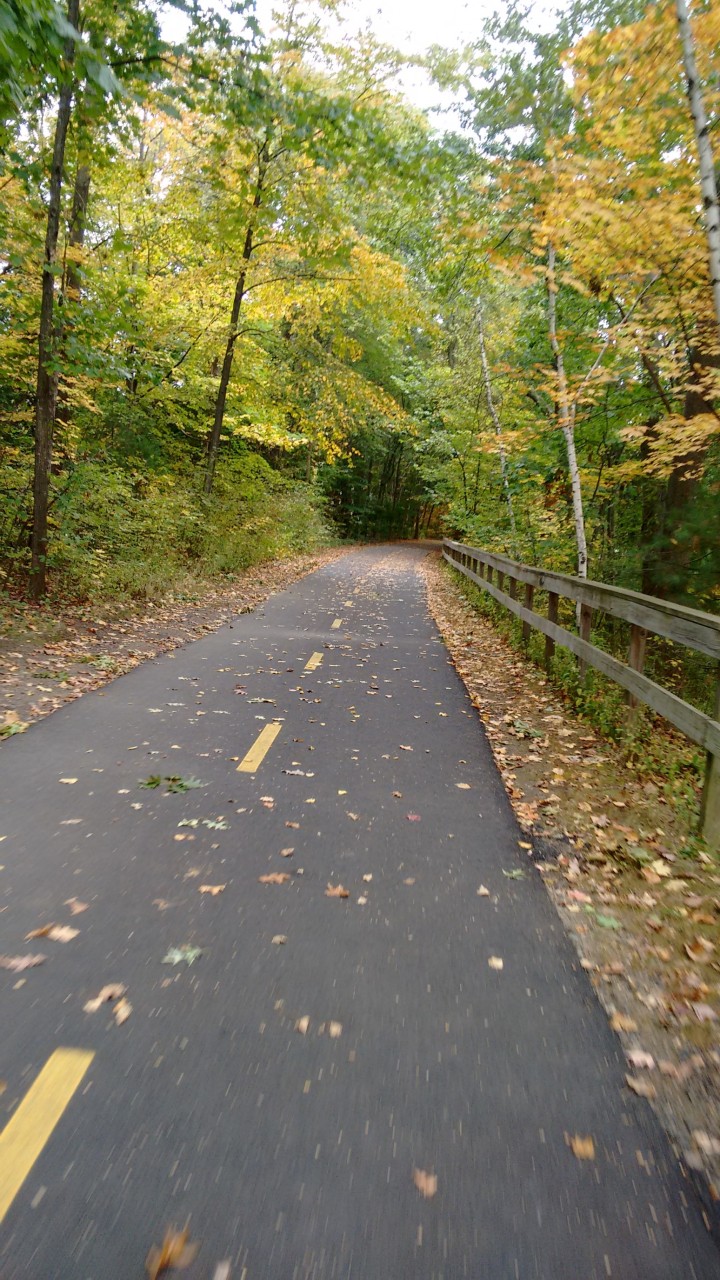 I arrived to my starting trailhead pretty quickly, and stashed the bike in the woods, to be retrieved Sunday night. This pond was a memorable landmark, and I also marked it on GPS. 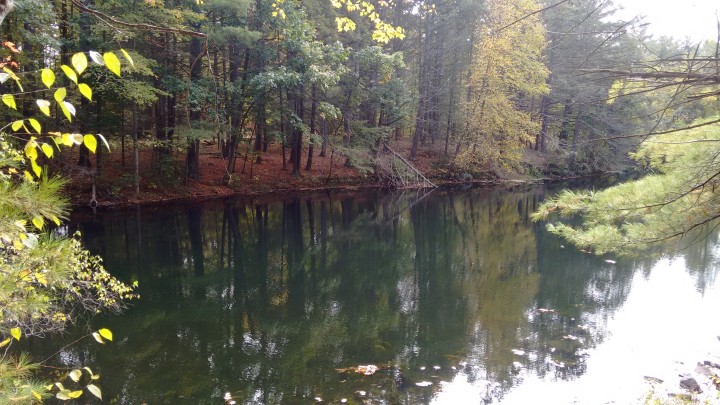 There was lots of nice ridgewalking today, and the temperatures were perfect. 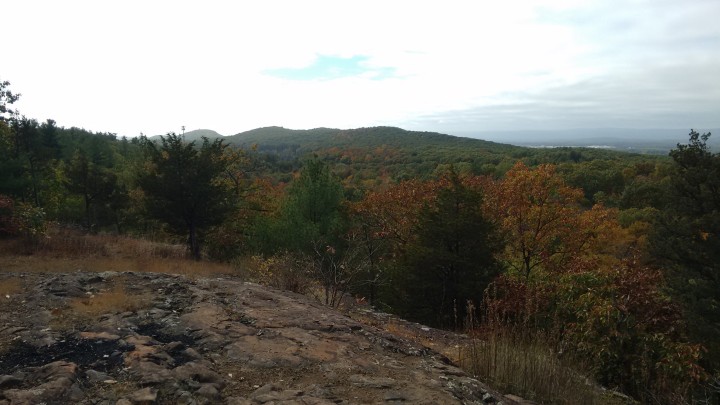 I’m not sure what the smokestacks in the distance are, and I was surprised how green the foliage was. 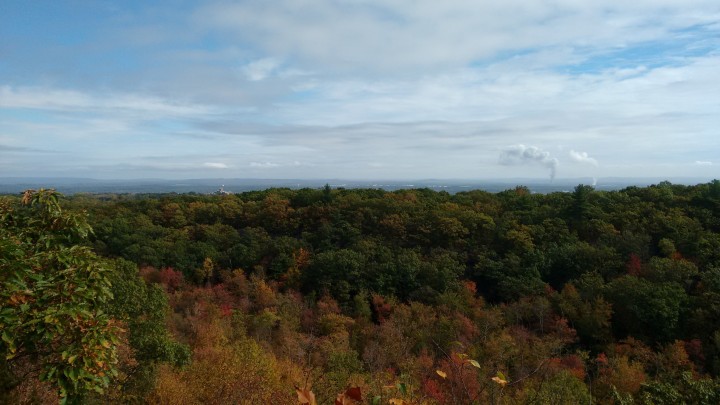 After two miles, I came upon a tower which was easily climbed. It wasn’t signed, and it doesn’t seem to show up on any maps, so I don’t know its name.

The trail was very exposed in this section, usually skirting the western edge of the ridge. I captured a short video for the full experience too. 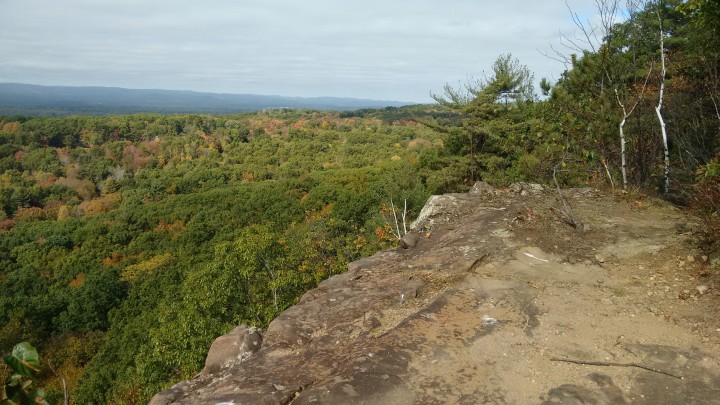 As I approched the more popular tourist area, I saw some grafitti on the rocks. Stupid egotistical people.

Yes, this part of the trail was just as exposed as it looks. I wouldn’t want to hike this part in the dark! 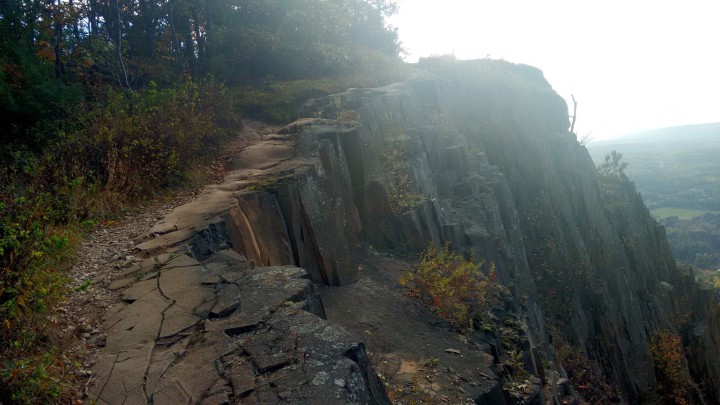 I think this was communications or weather equipment, it looked bizarre! 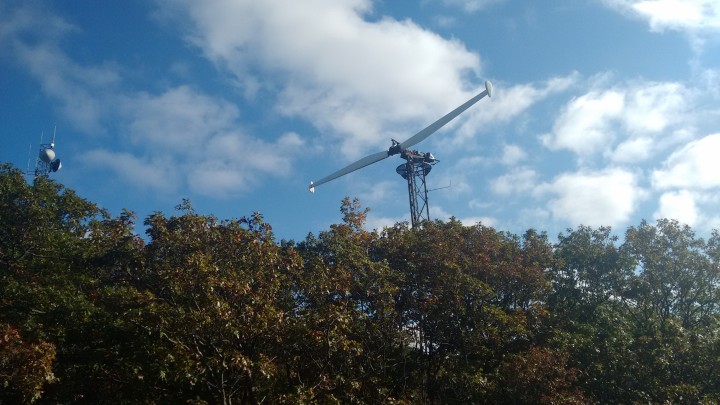 After a brief descent to cross a road, the trail re-climbed so steeply up into the Mt. Tom State Reservation. I was only hiking at 1mph, but making good vertical progress.

These information kiosks were scattered throughout the Reservation (park).

You can tell the local trails were named by college kids, ha!

A rare eastern view, looking over the Connecticut River valley, and a huge bend in the river. 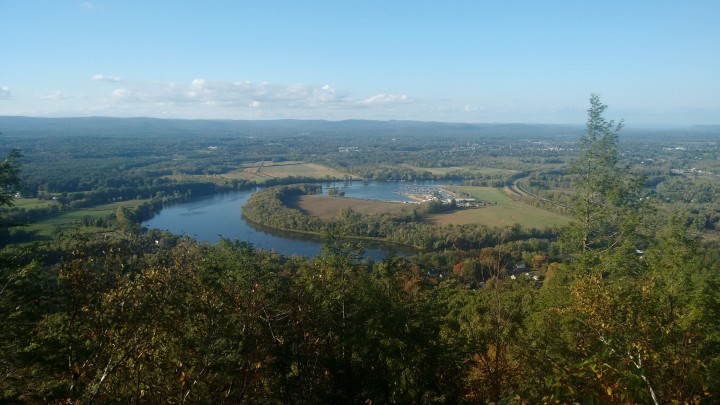 It was a hot, sweaty climb up to Mt. Tom! 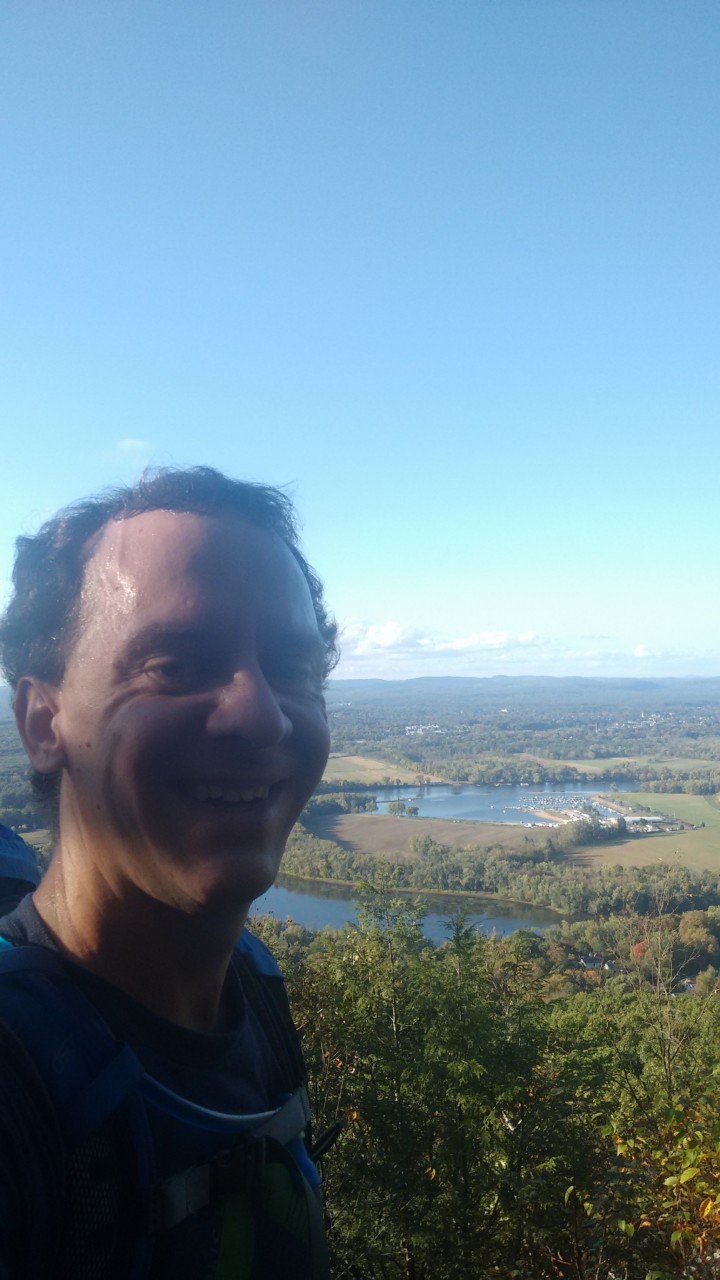 A little sssnake! They were getting harder to see with more autumn leaves on the ground. 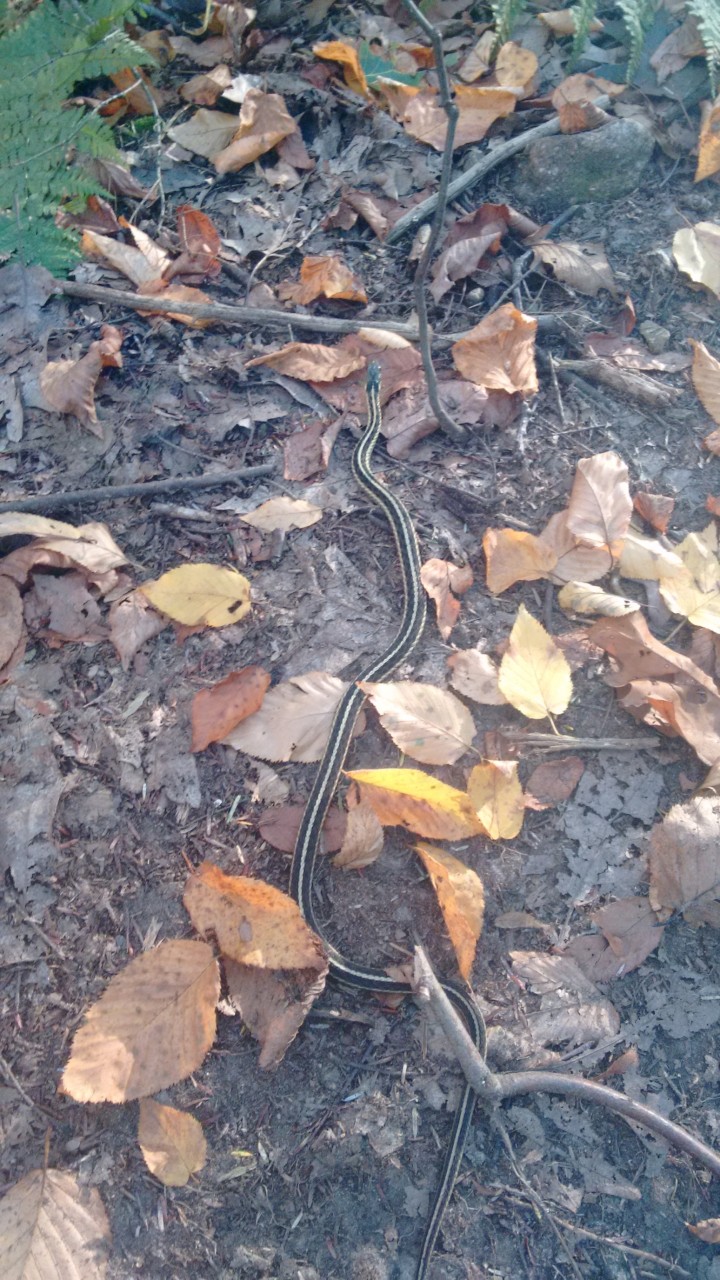 The last mile to the trailhead was on a beautiful smooth trail, and the crunchy leaves made it a perfect fall day hike.

The trail just ends at the Connecticut River, under a set of high-voltage power lines. I’m guessing there aren’t any plans to build a footbridge over such a large river.

The official route of the NET has a half-mile gap, with the trail picking up again on the opposite bank of the river. But, to get across the river, I drove 5 miles up the west side, crossed a bridge, and then drove 5 mile back down the east side. I was driving thru either Holyoke, and I noticed the car in front of me was a triple-crown hiker (AT, PCT, CDT). That’s a pretty rare person, and quite a coincidence! 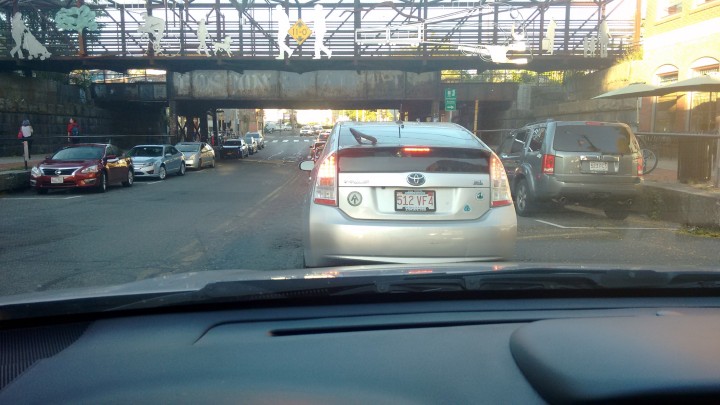 I parked my car at the trailhead right next to this sign, and then started hiking. I had 7 more miles to go today.

It was a tough, steep climb up to Mt Holyoke, and I wasn’t making the progress I had hoped. But the setting sun was amazing from up there!

There was a huge white building on top of the summit, appropriately named Summit House, where tourists can drive up and visit in the summer. It looked like it was closed up for the winter, though. 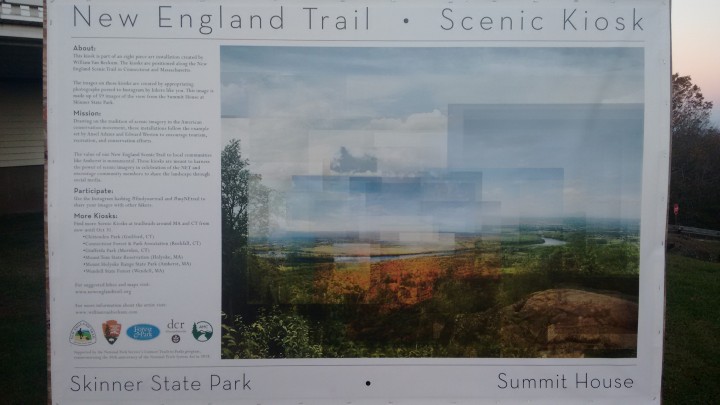 With three miles to go, darkness forced me to get out my headlamp. This sign wasn’t exactly encouraging, either. Darkness, AND “confusing unmarked trails”…how can I lose?! 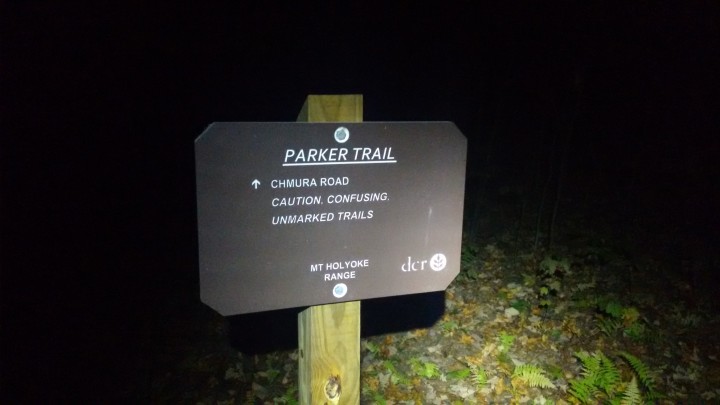 I passed this sign near Devils Garden trailhead, which meant I only had a half-mile to get to my campsite.

Finally at 9pm, I stopped walking and setup my tent on the summit of Mt. Norwottock. Since I had made dinner an hour earlier at a picnic table, I simply crawled into my tent and fell asleep.

I woke up at 6:30am to a dense fog on the summit, and it felt colder than yesterday.

I had planned to cover about 28 miles today, so I packed up quickly and departed the summit by 7am. Plus, the sooner I descended into the proection of the trees, the warmer it would be!

The first two miles were quite slow going and technical, with lots of rocks to squeeze though, around, and over. This specific spot was named Horse Caves.

At a trail junction near Long Mountain, I found a trail register! These are so rare on this trail compared to other long-distance trails. 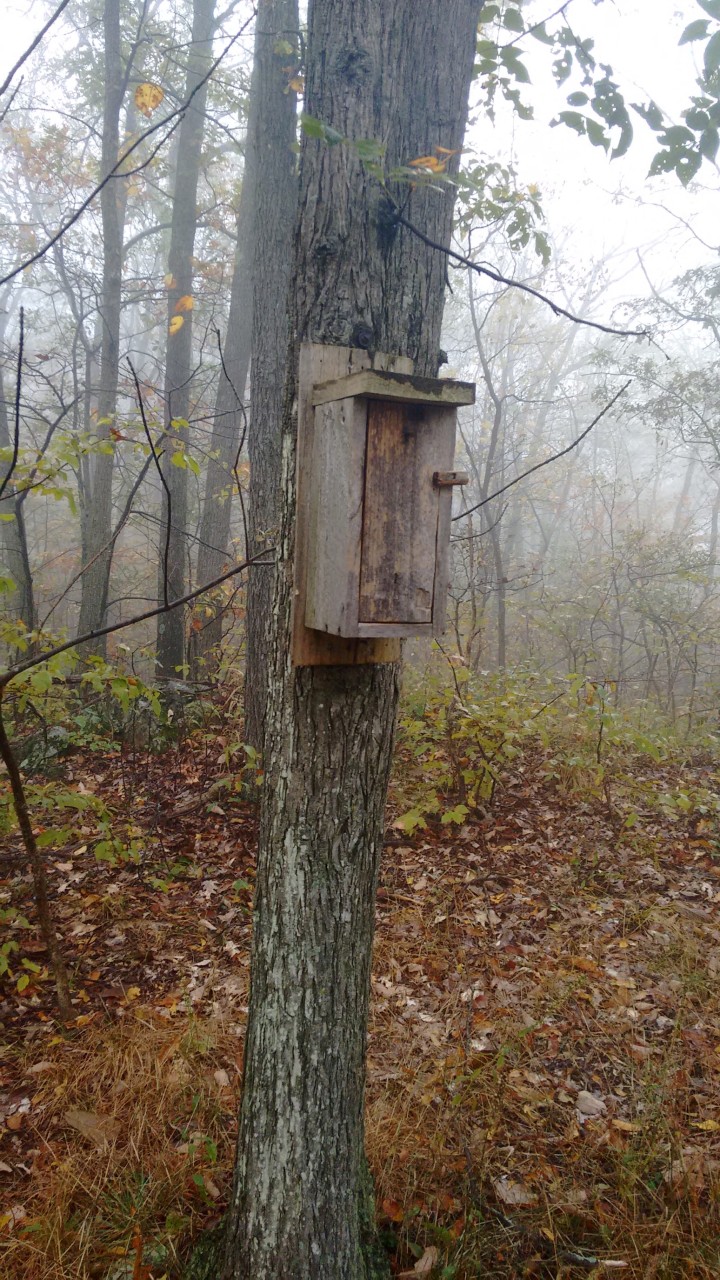 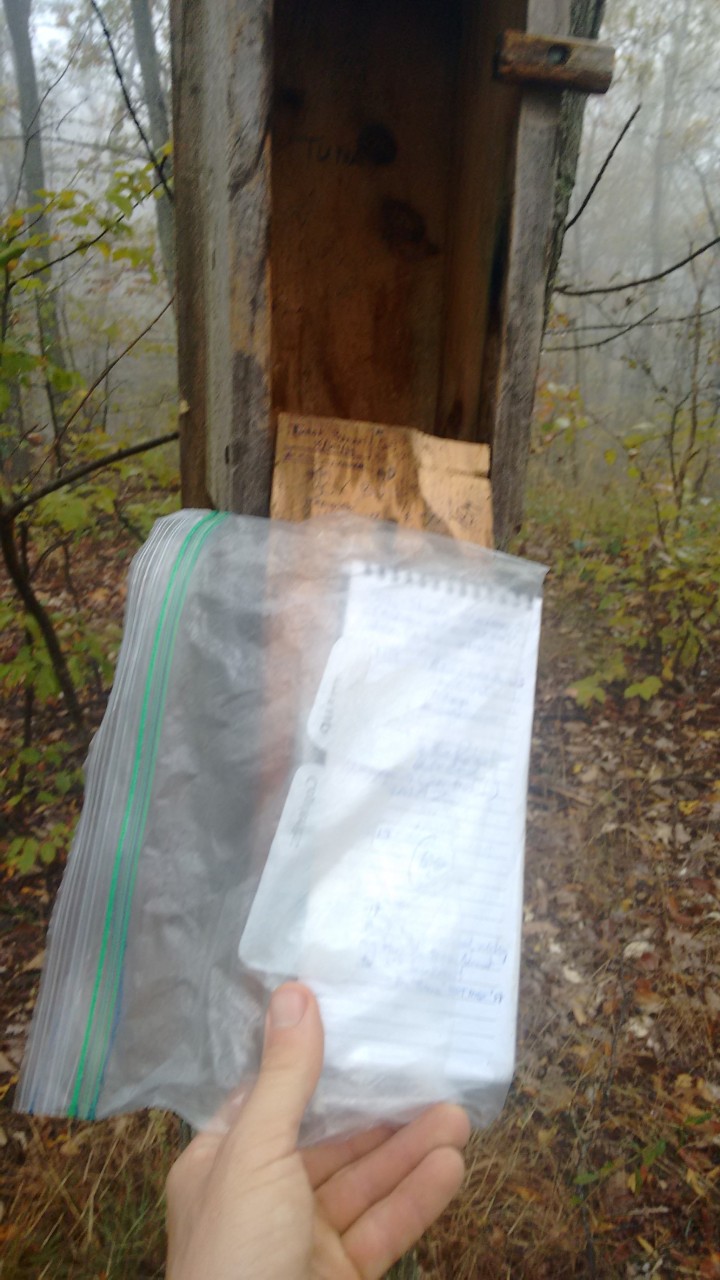 For most of this section, the NET and the Robert Frost Trail share the same path. 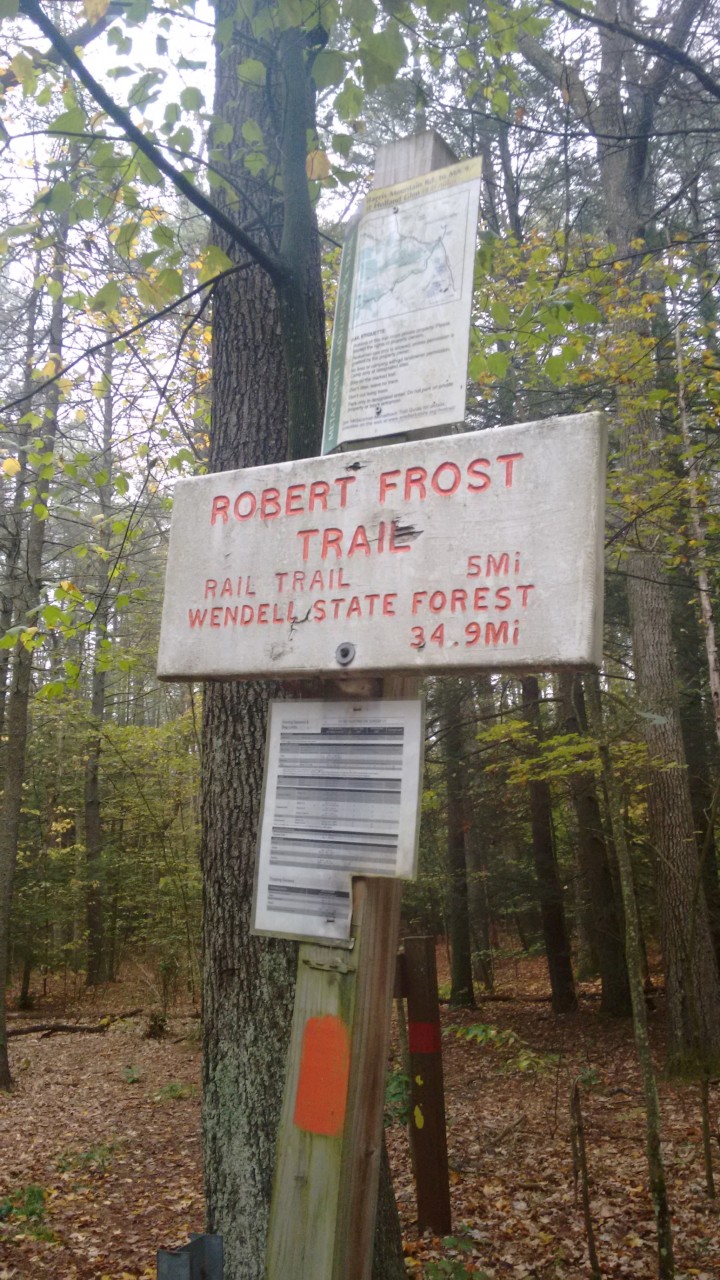 In order to get down to a road crossing, there was rope to use as a handrail. It was the steepest grade that I’ve ever seen on an established trail, good thing it was only 30ft long. It should have steps or a switchback, but I think the private property owner prevented that improvement.

Most of the rest of the day was in dense hardwood forests, with the occasional roadwalk. The miles went by quickly and easily, which was good because I had a long way to go! 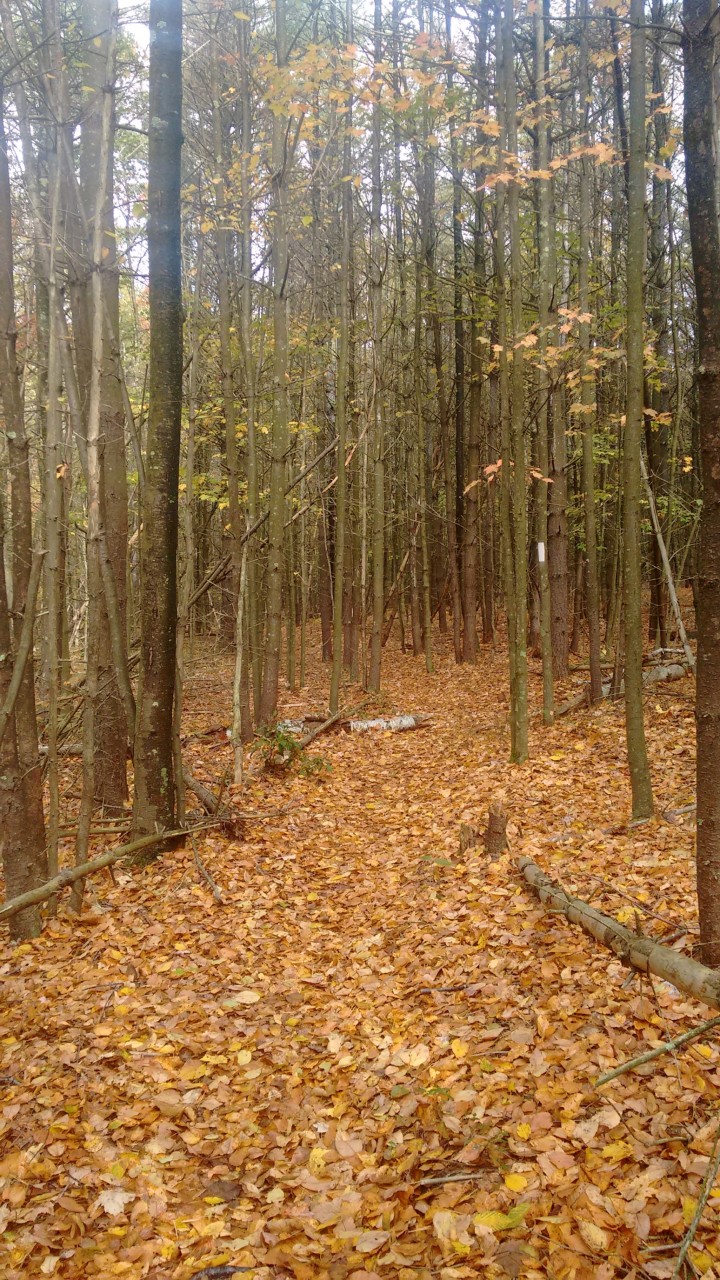 There were many nice and overbuilt bridges in this section, usually donated by local hiking clubs or boy scout troops.

I have no idea why there was a chair here, at least 3 miles from the nearest road, but I took it as a sign to sit down and eat. Nutella always tastes better in a proper chair!

The Quabbin Reservior is the public drinking supply for Boston and suburbs, almost 70 miles to the east. Four towns were evacuated and flooded in the 1940s to make the reservoir. 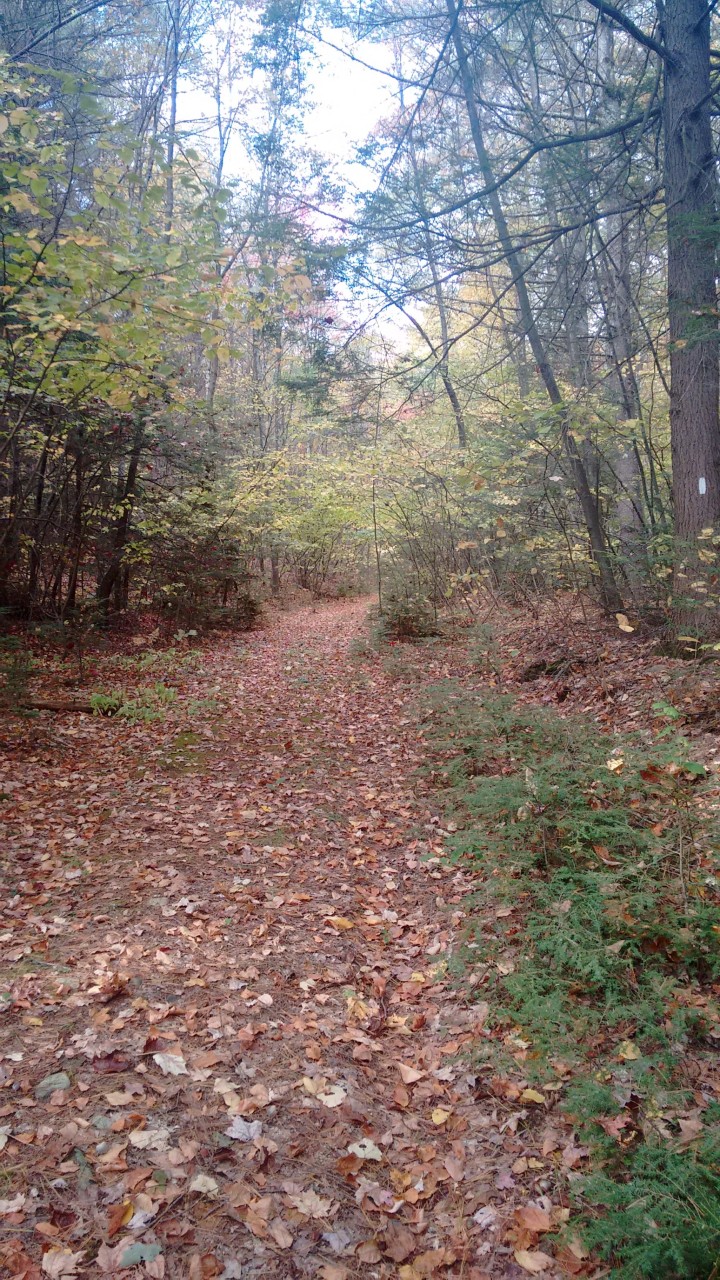 At 5pm, I realized that I still had four miles to go, so I picked up the pace. Sunset was just after 6pm for this time of year. The dense forest was already starting to darken in the low angle of the sun. 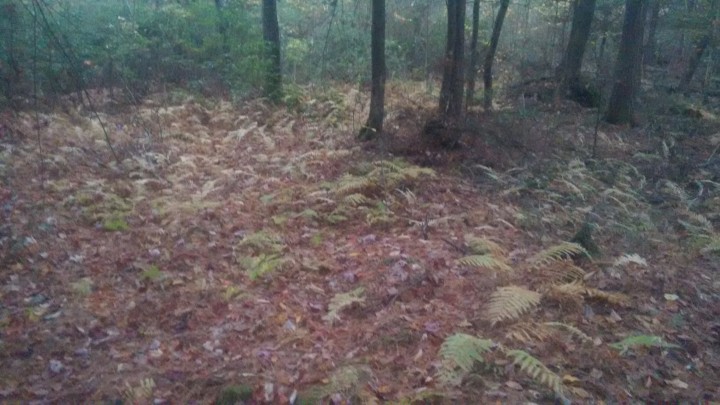 Just before sunset, I hiked by an unnamed pond, and then emerged from the woods onto a small country road. I only had a mile to go, and it was on an easy to follow road.

I arrived to my finishing trailhead at Lake Wyola at 6:15pm, perfect timing! But, I had no phone service to call a taxi. So, I spent an hour exploring the town’s local highpoints in hopes of gaining a usable signal. That didn’t work, and it was getting cold. So, I started walking south on the main road, knowing that eventually I would get a signal. After 20 minutes of walking uphill, it worked! The driver was a little wary about picking up a passenger in the middle of nowhere in the dark, but after some explanation it was fine. She dropped me back at my car 30 minutes later, and then I drove back across the river to retrieve my bike. I returned home quite late, but it was worth it!